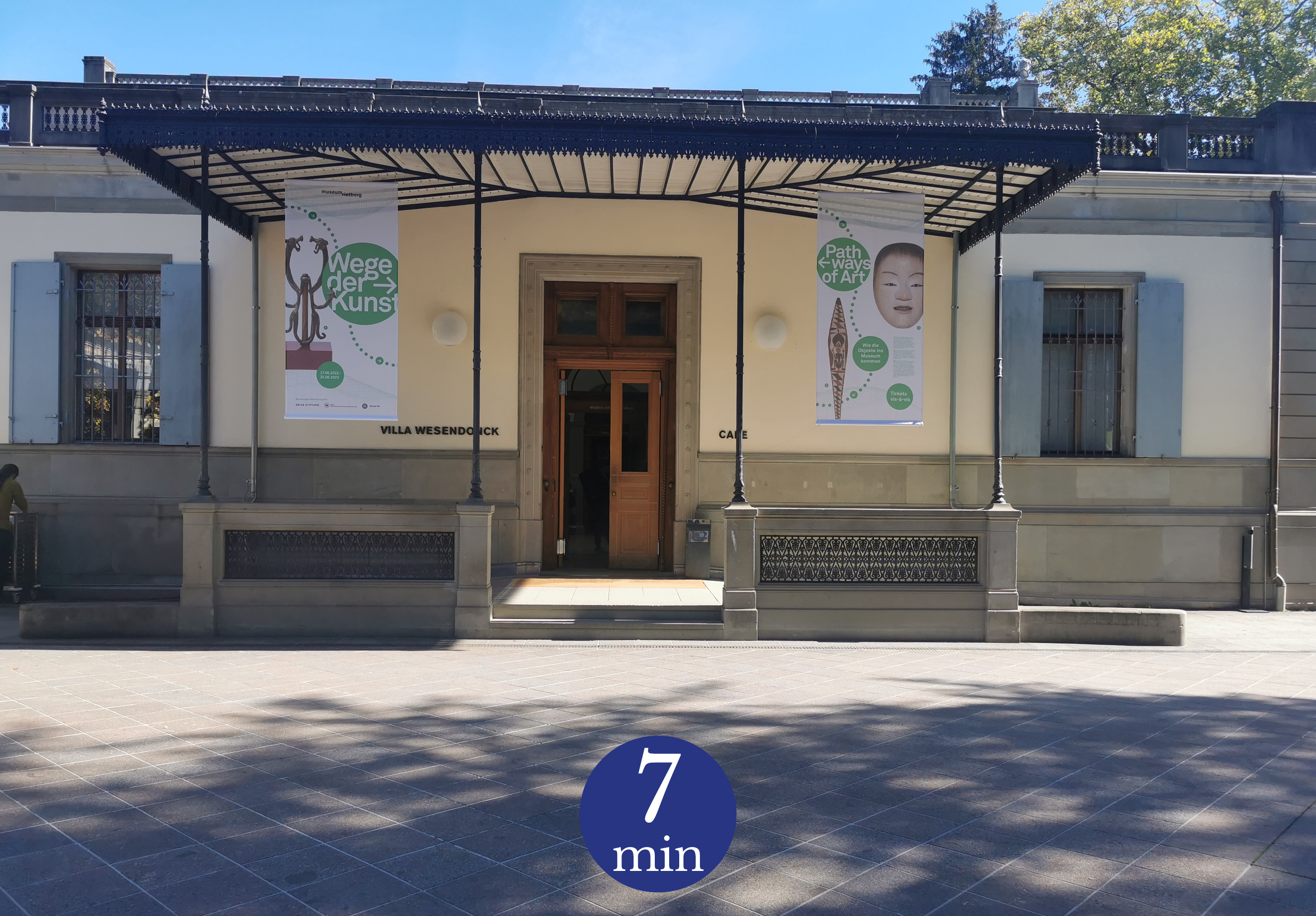 For one year, the Rietberg Museum in Zurich is offering its visitors the opportunity to discover and question the history of the objects that make up its collections today. This exhibition, which is part of the museum's permanent tour, offers twenty-two focuses to help the public discover the people and the relational networks that lie behind the artefacts on display.

Twenty-two showcases have been installed in the permanent rooms of the Rietberg Museum in Zurich. On view until 25 June, they form the temporary exhibition Wege der Kunst (Routes of Art). While the museum's display is more in the vein of fine arts with a minimalist scenography in neutral colours, the exhibition explores a completely different approach to the collections.

Objects, photographs, facsimiles and original archival documents are displayed side by side in the showcases of Wege der Kunst and show the visitor all the tools available to researchers and museum professionals to research the provenance of collections. Although not new, such research is now a major challenge for Western museums, especially those that hold collections of non-European origin.1 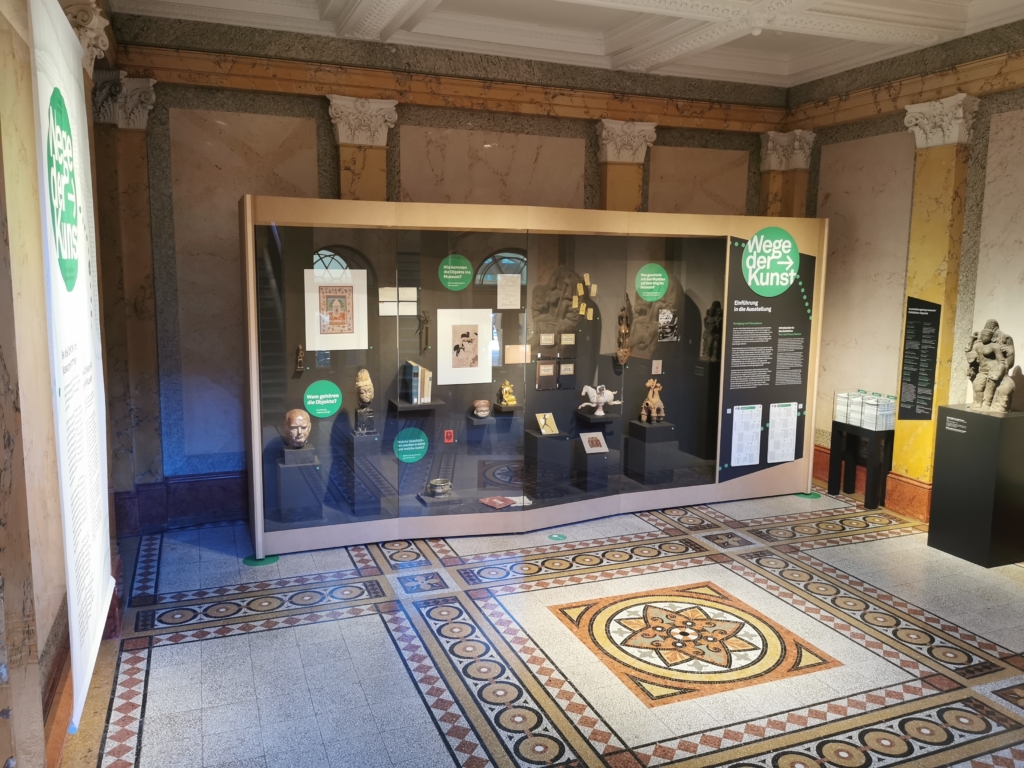 In addition to possible requests for the restitution of objects, which are more widely publicised and known to the general public but marginal, there is often a demand for better access to collections preserved in the West for their native populations, as well as a demand for greater respect for the recommendations of these populations in the way these objects are presented, or not presented at all.2

More broadly, this field of research opens up a reflection on the role played by museums within colonial history in the collection and constitution of a knowledge and a discourse on colonised populations.

How did the objects come to the museum? Behind this question are people - the native population, collectors, dealers, collectors -, institutions - museums, missions, colonial governments - and the network of relationships they maintain. From their creation to the museum's display cases, the artefacts have sometimes known multiple owners and have often travelled long distances. The life of the objects does not end in the museum's storerooms. Within Western institutions, the collections have been the subject of various views and discourses and the way in which they have been displayed and still are is far from neutral. The exhibition explores these "biographies" of objects and collections through twenty-two examples and four main themes: collecting, exhibiting, selling and knowing.

We will not go back over this itinerary here, which can be better appreciated through a visit to the exhibition, but a few points should be emphasised to convince the reader that it is worth visiting the rooms of the Rietberg Museum.

Like many museums dedicated to non-Western material cultures, the Rietberg Museum has chosen a fine arts style presentation. The rooms are painted in plain, neutral colours, the display cases and pedestals are simple and discreet, and the lighting is designed to bring out the volumes of each piece. The objects are most often presented individually, without any link to each other and without any context other than the texts that accompany them. The labels are generally short and discreet. In short, the aesthetic aspect of the visitor's experience is privileged and the objects are presented as works of art, in the same way as Western paintings or sculptures. 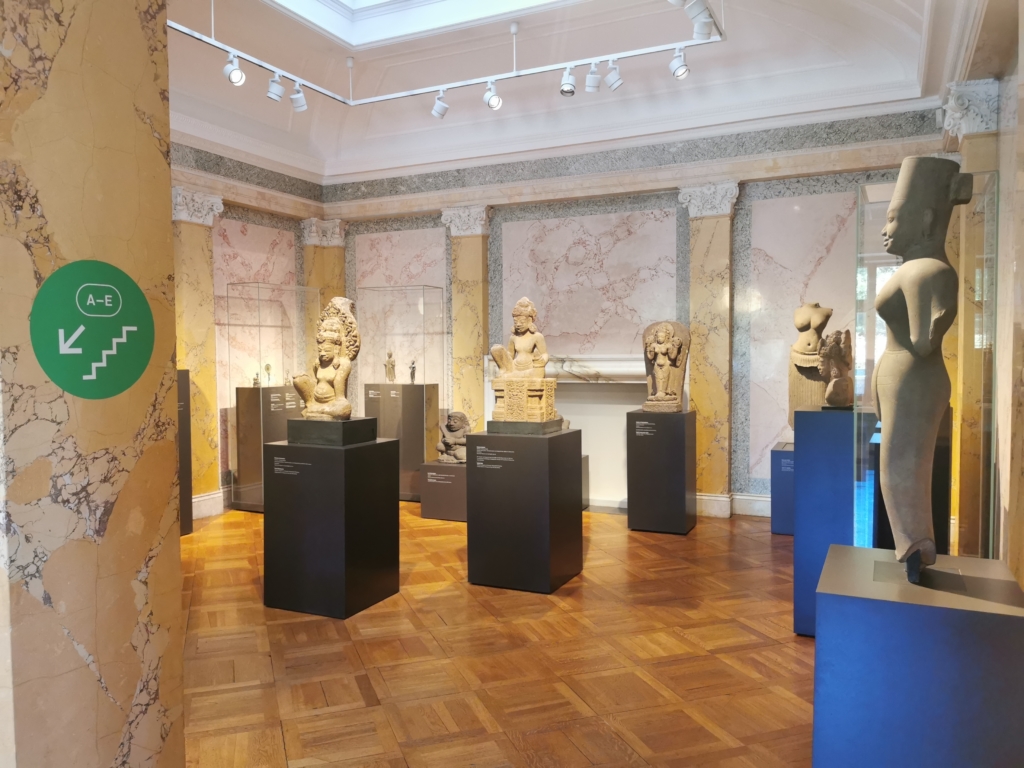 Wege der Kunst offers a welcomed counterpoint to this presentation. The showcases, which are more imposing, take up a presence in the rooms and bring together objects of various kinds as well as photographs, archival documents and books. The various elements that make up a museum's collections and that allow research into the history of the collections are thus brought together. Each display case is devoted to a particular collection and traces its history, or at least the elements known about it. The public is thus invited to discover the people and institutions behind the objects and their circulation. Faces, notes, sketches, publications give a real depth to the history of the collections.

But the exhibition also emphasises the original context of the objects and how they have been transformed by their journey through the art market and the museum. Several showcases remind us that the objects on display were not originally intended to be exhibited as works of art, as this notion has no exact equivalent in many cultures. Wege der Kunst also reminds us that some objects were not meant to be seen by everyone or permanently and could be subject to a number of restrictions. The example of Buddhist sculptures, now widely used in the West as decorative objects, is striking in this respect. The exhibition looks at their religious nature and the history of their collection during the twentieth century, which was mainly based on aesthetic interest. 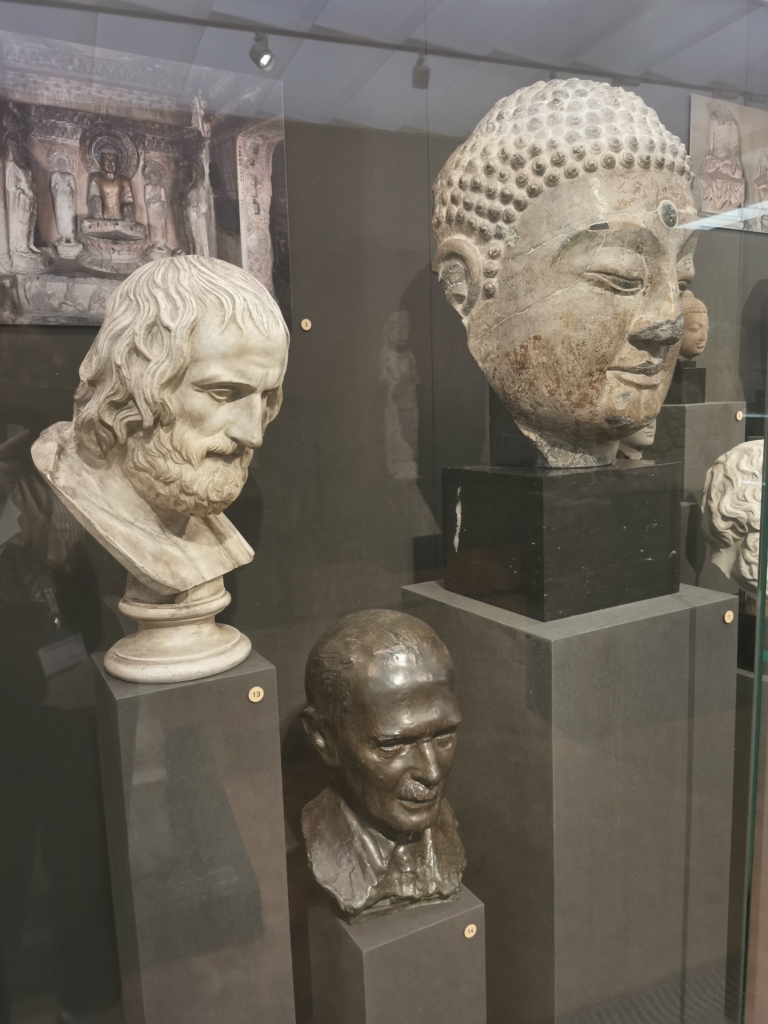 Western museums have of course played a key role in shaping the way we look at non-European objects, and the exhibition Wege der Kunst is thus a form of self-criticism. It also offers an alternative way of presenting the collections, and one can only regret that the showcases will once again have to give way to the very refined scenography next June.

While it is usually relatively easy to trace the people who collected, donated or collected a particular object in a museum's collections today, the data concerning the pre-collection period is often much more fragmentary. Described in broad terms, sometimes without being named, the figures belonging to the cultures of origin of the objects are often surrounded by a vagueness that is most frustrating for researchers. Assistants, informants, political and religious figures, designers and owners of the objects do exist and leave their mark, seen through the eyes of Western collectors and often barely present in their accounts.

Writing a history of collections that takes into account all points of view is therefore not an easy task, as the vast majority of sources that have come down to us on the collection of objects have been produced by Western actors. However, some figures have received more attention and research sometimes allows us to rediscover names and faces. 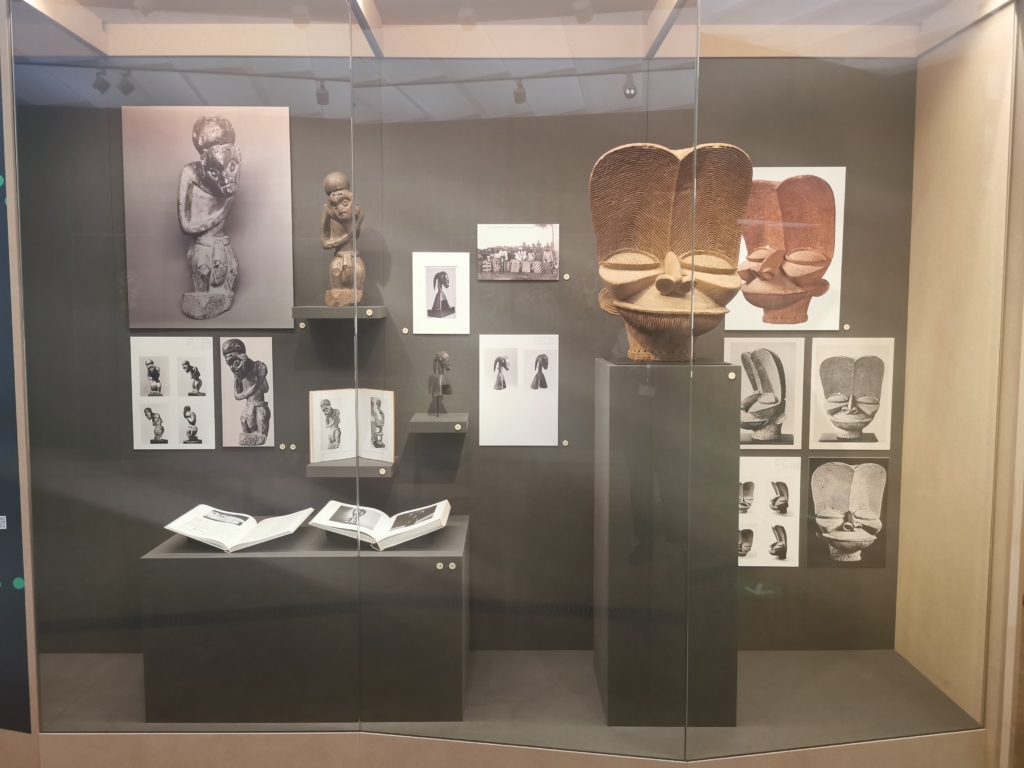 The Wege der Kunst exhibition thus highlights several personalities belonging to the cultures of origin of the objects and linked to the history of their collections, such as the Cameroonian king Njoya, who established a diplomatic policy based on the exchange of objects with the colonial government at the beginning of the 20th century. Another example is the dealer Hayashi Tadamasa who played an important role in the development of Western taste for Japanese art.

The exhibition also addresses the practice of collecting beyond the Western context. Several showcases are devoted to the particularly important role of collections for the Chinese imperial power for example.

One of the interesting aspects of the exhibition is that it does not impose chronological limits and also opens a window on the contemporary functioning of museums, an aspect that is often not well known by the general public. The Rietberg Museum is already involved in this field through the existence of a storeroom that can be visited freely by the public and the exhibition offers an opportunity to approach this question from another angle. Recent initiatives aimed at improving knowledge of the collections are thus highlighted.

The more recent collection of terracotta from the state of Gujarat in India by Eberhard Fisher, former director of the Rietberg Museum, through his collaboration with the Hindu artist and scholar Haku Shah, is the subject of a showcase, balancing contemporary collecting practices with those of previous centuries.

The exhibition also addresses the role of research, which is always renewed, particularly through the study and restoration of objects, which makes it possible to obtain a better knowledge of their material history when documentation is lacking.

The main strength of the exhibition is that it does not try to ignore the shadows and ambiguities in the history of the Rietbgerg Museum's collections, or even the clearly identified problems posed by certain objects. Far from being an ode to the art market, Wege der Kunst points to the problem of the secrecy of sources, dear to Charles Ratton, which poses numerous problems in terms of legality and the relevant recontextualisation of objects. The question of looting and illegal exports is not avoided either, as the museum acknowledges that some pieces from its pre-Columbian collections acquired in the 1950s did not leave their countries of origin legally.

The question of the ambiguity surrounding objects collected in a colonial context, and therefore in the context of relations of domination favouring Western collectors, is not avoided either. While the exhibition does not seek to provide a single answer, it does set out the terms of the debate for its visitors and proposes some avenues for reflection, notably through collaborative projects such as the Benin Switzerland Initiative.3

This programme brings together eight Swiss museums holding collections from the Kingdom of Benin (present-day Nigeria) and aims to determine, in collaboration with Nigerian partners, whether certain objects in the Swiss collections may have originated from the looting that followed the sack of Benin City in 1897 by the British army. 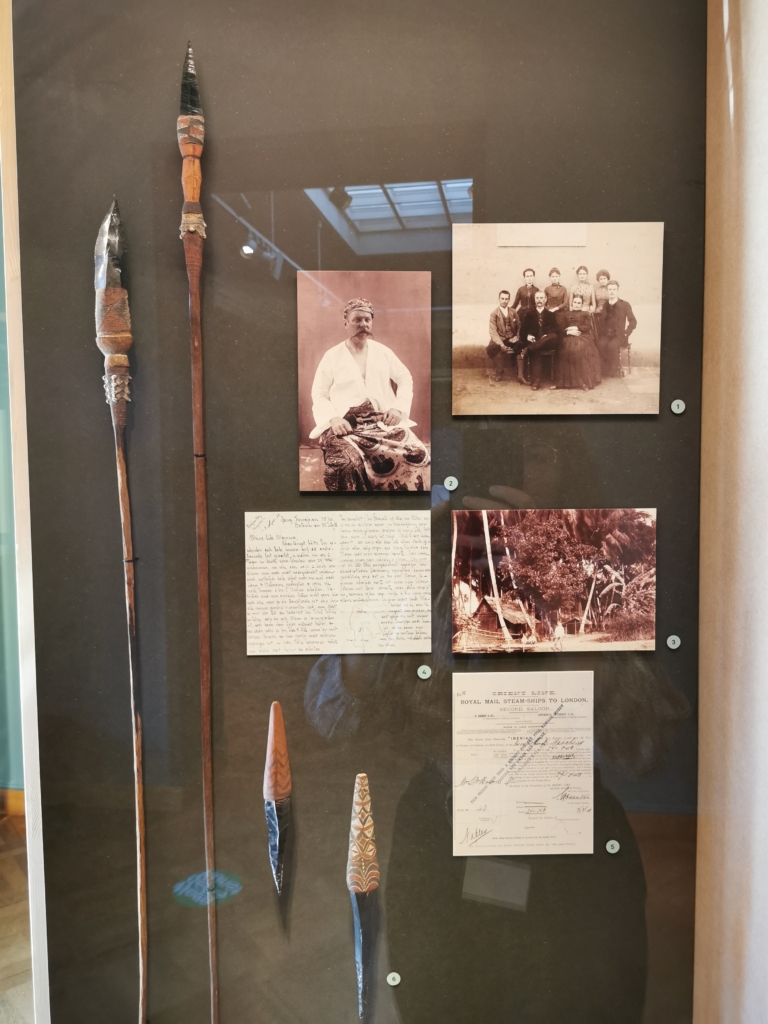 Wege der Kunst is therefore to be welcomed as a refreshing initiative that fleshes out an otherwise rather classical permanent exhibition. It is doubtful that all visitors will have the courage to read the extensive set of texts accompanying the exhibition, although a real effort has been made to make it accessible in terms of writing. However, it seems to us that this does not ultimately detract from its purpose. As each showcase can be approached independently, visitors are free to read only the texts that interest them most without being hindered in their understanding. Each module provides a few keys or offers an insight into a specific subject and, whether one reads just one or twenty-two, one necessarily leaves better equipped to understand the very complex debates that are currently shaking the museum world.

Cover picture: Entrance of the historical building of the Rietberg Museum showing the poster of the exhibition Wege der Kunst. © Photograph: Alice Bernadac

1  On this topic: notre article.

2 On this topic: notre article.

3 For more information on this project: https://rietberg.ch/fr/recherche/initiative-benin

Further readings about the history of Oceanic collections and museums of ethnography: