The purchase of J'avais un rendez-vous, found by chance in the excellent Flagey comic book shop in Brussels, was a matter of seconds. Although I had not yet read the Corto Maltese series (I am well aware that this is an aberration, it is as if a movie lover had never seen a single Quentin Tarantino movie), the quality of the watercolors on the cover suggested that there would be some very nice surprises inside, and perhaps, the promise of the kick needed to decide to read the adventures of one of the most famous sailors of the ninth art. 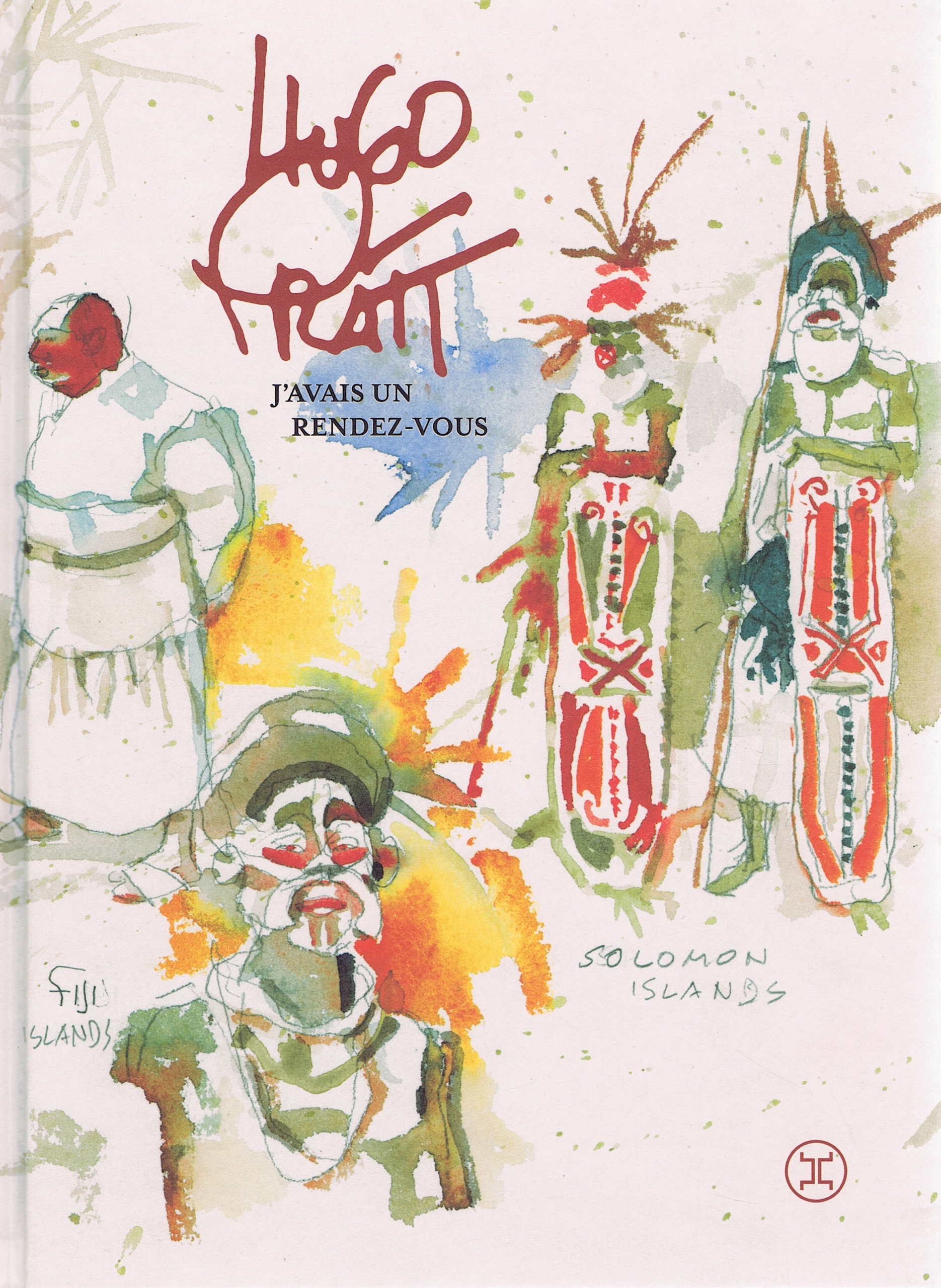 The album is dedicated to Hugo Pratt's last trip to the Pacific in 1992, before he died in 1995. It was an opportunity for the artist to test his expectations about these islands and to dream one last time. The work published in 2020 is a more complete version of a volume published the same year of the death of the artist. 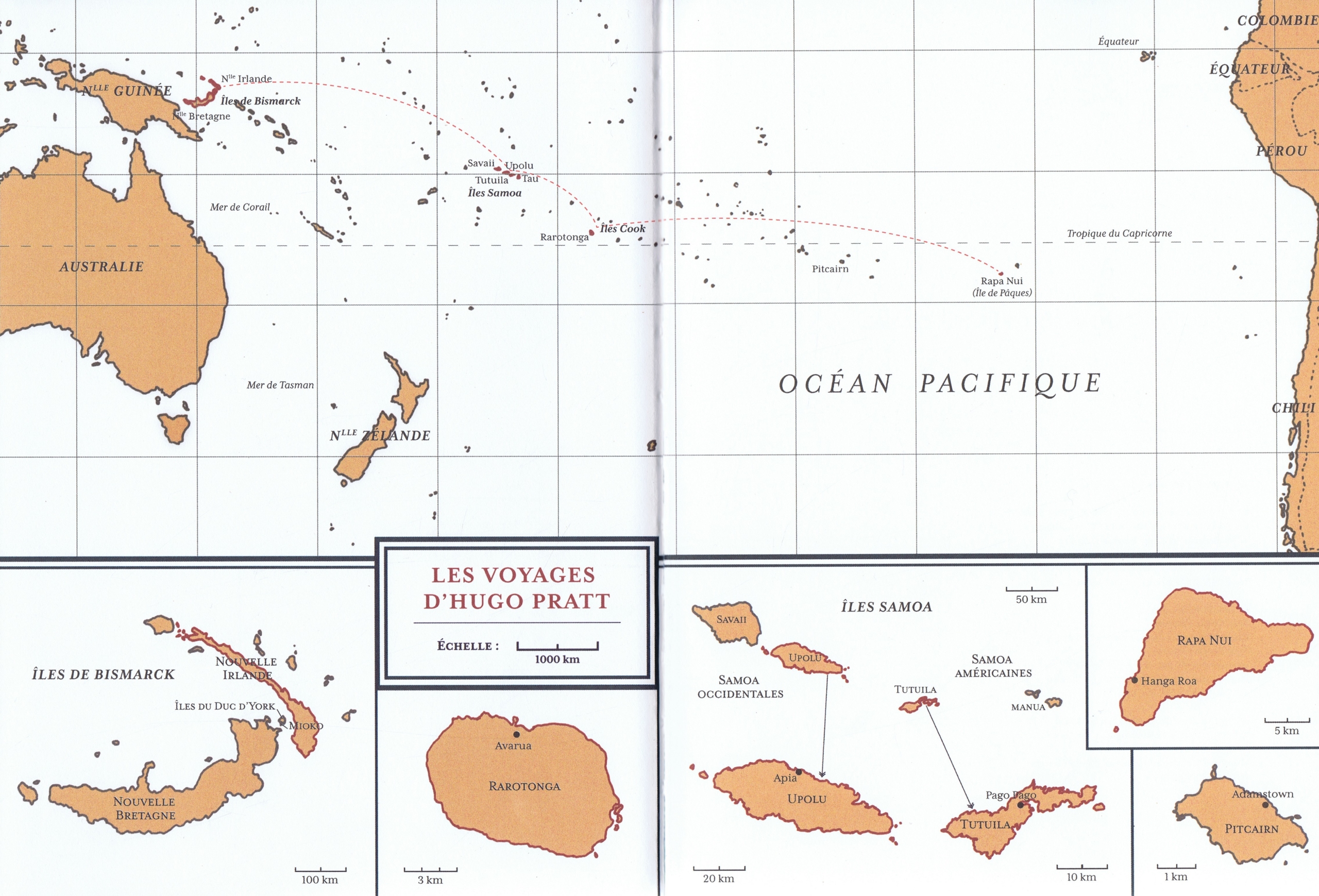 From the start, J’avais un rendez-vous appears magnificent, and well supplied. Illustrations, excerpts from sketchbooks and plates from the comic strip punctuate a text in Hugo Pratt's hand that, in all, must fit in about thirty pages. These few chapters, each bearing the name of one of the islands that the famous cartoonist visited, are followed by a short text signed by Patricia Zanotti testifying to her experience of traveling with him in the Pacific. Finally, there are a few pages gathering photographs of the said trips in 1992, witnesses of the anecdotes told by Pratt during the previous chapters, just before the adventure finally ends with an express biography in some dates.

I was surprised to discover that the young Italian Hugo Pratt, before cultivating the art of the brush, had served in Mussolini's army, probably in response to the wishes of his father, who was a convinced fascist. This is difficult to imagine for a cartoonist whose memory is now rightly associated with humanism and open-mindedness in a period that favoured neither.

Three trading cards marketed by Liebig in the early twentieth century, similar to those that Hugo Pratt may have known in Venice during his childhood.

Pratt's roots, which the first few pages of the book focus on, paint a portrait of a dreamy and perhaps somewhat solitary child, a future poet of six or seven years of age in the 1930s, fascinated by the saturated color images he first discovered thanks to the Liebig vignettes he found in a creamery in Venice, his home town. This first contact was then nourished by chance encounters and readings, which put Pratt on the track of the pursuit of a dream and an ideal that is reminiscent of the constructed and dreamed exoticism to which many others had aspired before him.

"I came to the Pacific in search of a dream, or rather in pursuit of it."1 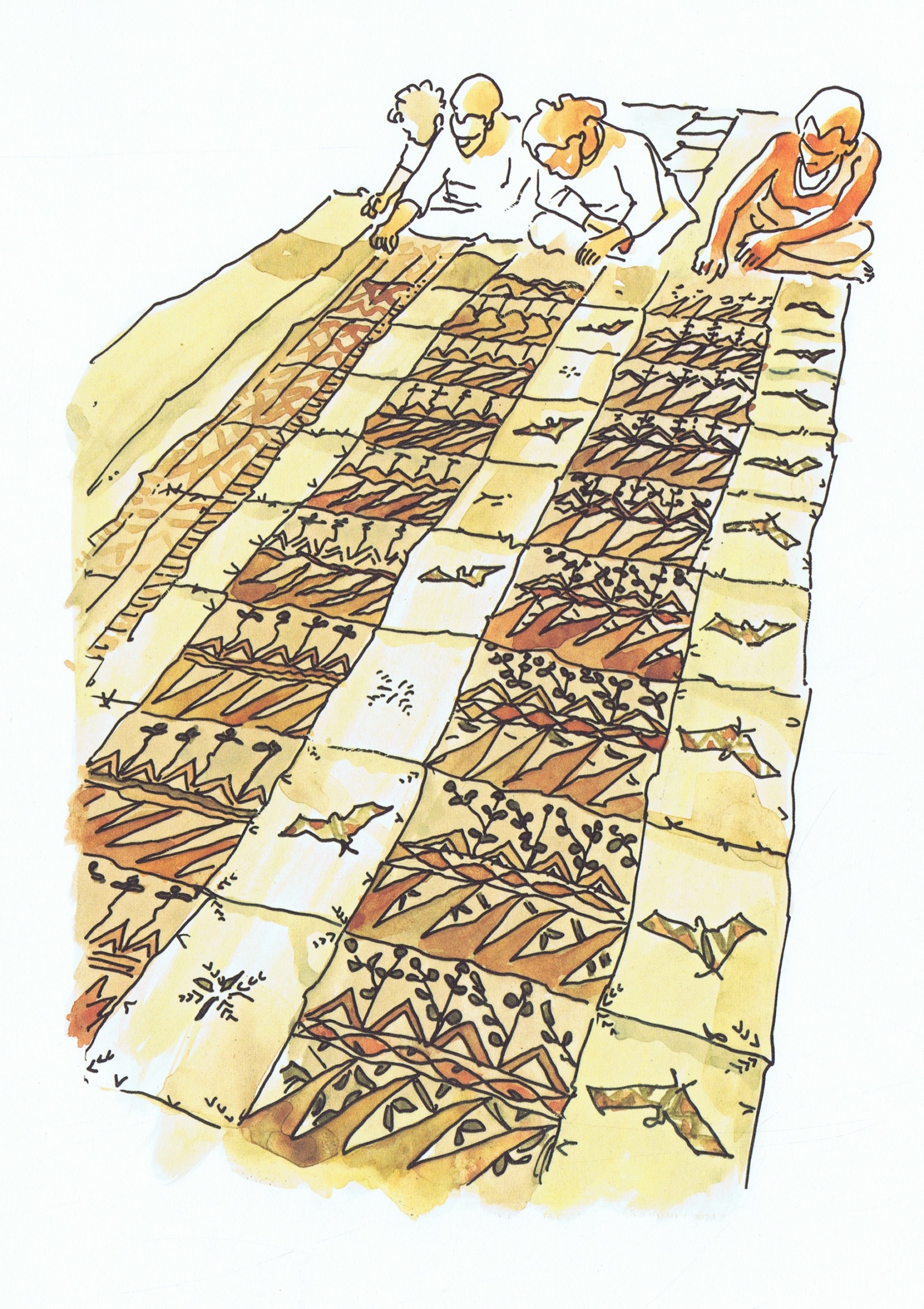 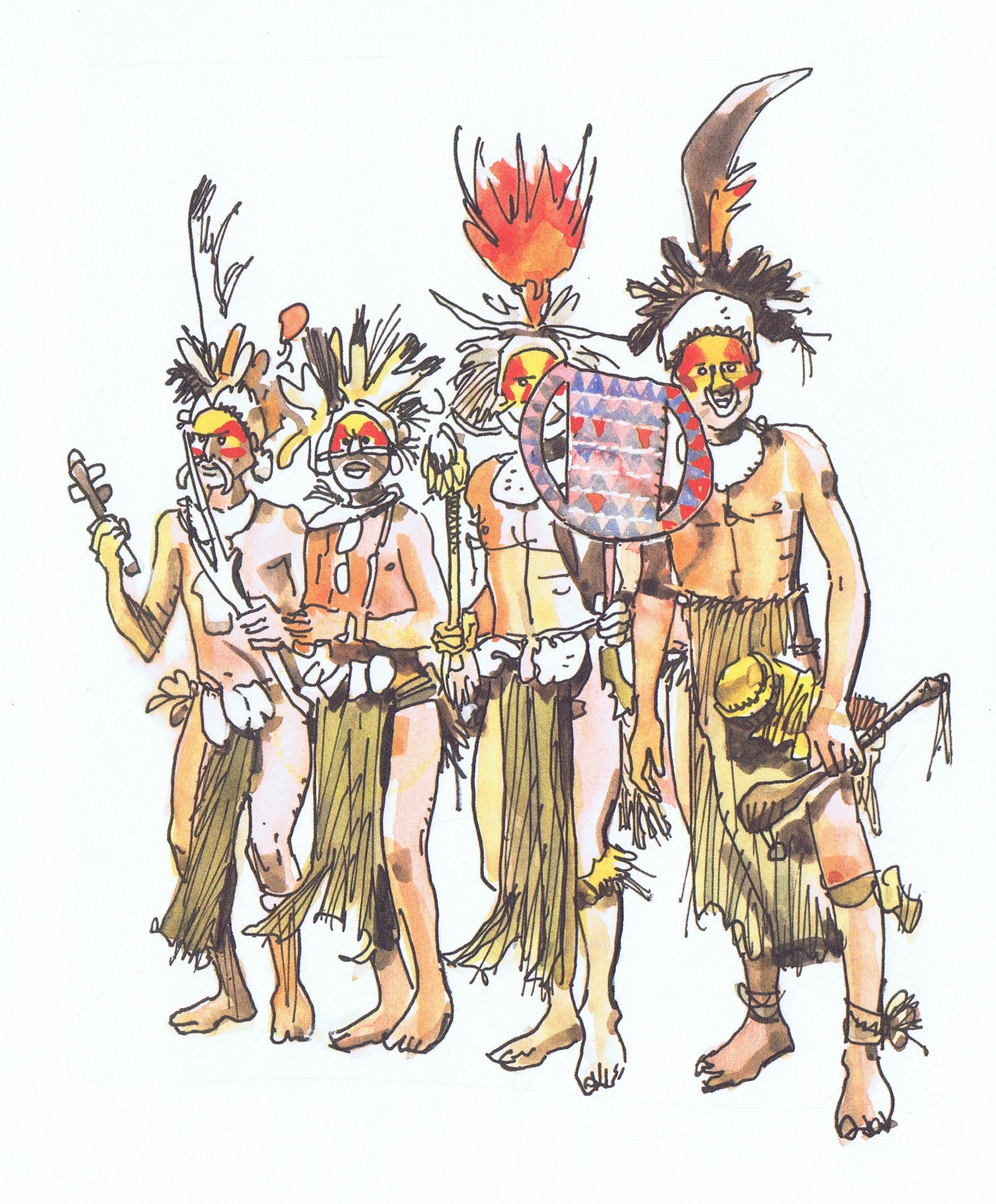 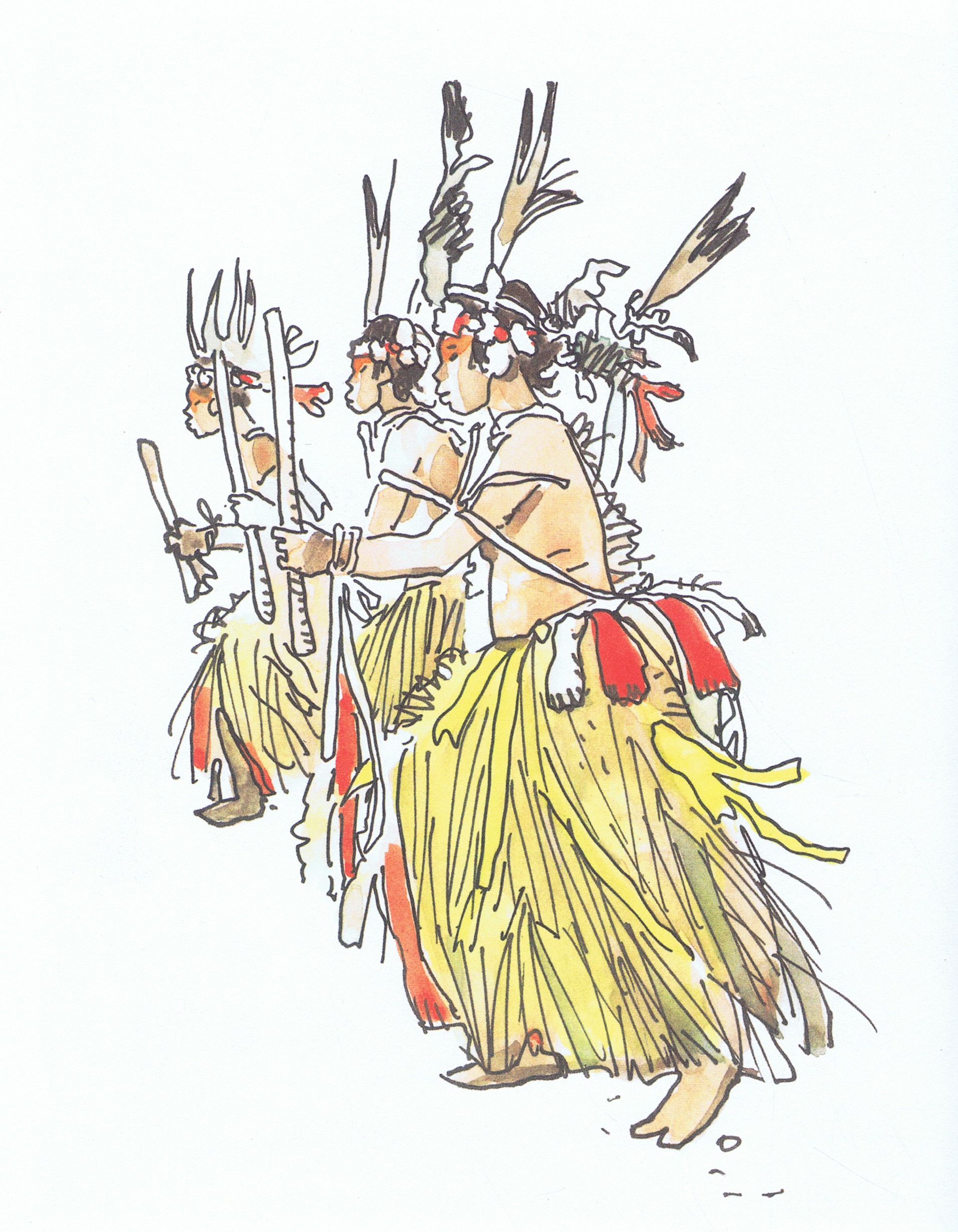 After this brief introduction, during which we understand quite well the nature of the personal prism through which he will dream and then discover the Pacific as an adult at the end of his life, the chapters in the name of the different islands visited by Pratt in 1992 follow each other, which prove to be unequal in terms of content. We discover in turn with pleasure Rapa Nui, Rarotonga, Pago Pago, Apia, and finally New Ireland; however, this limited discovery is often done through historical emblematic figures, very often from the Navy, who fascinated and inspired the artist. Although interesting, they are not considering the local culture in a very profound way, except in the specific case of Rapa Nui, which seems to have left a lasting impression on Hugo Pratt (as shown in the very poetic plates below). 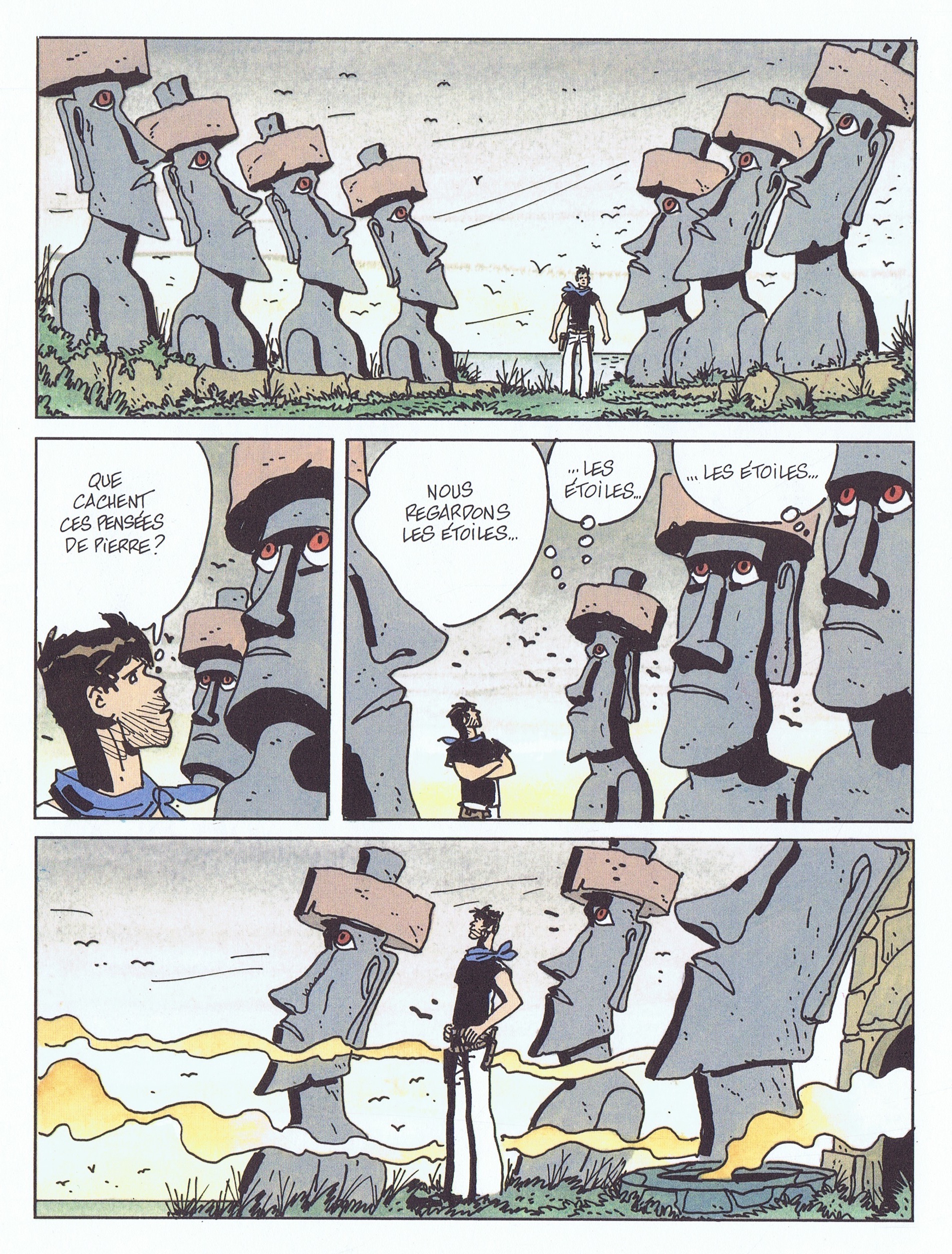 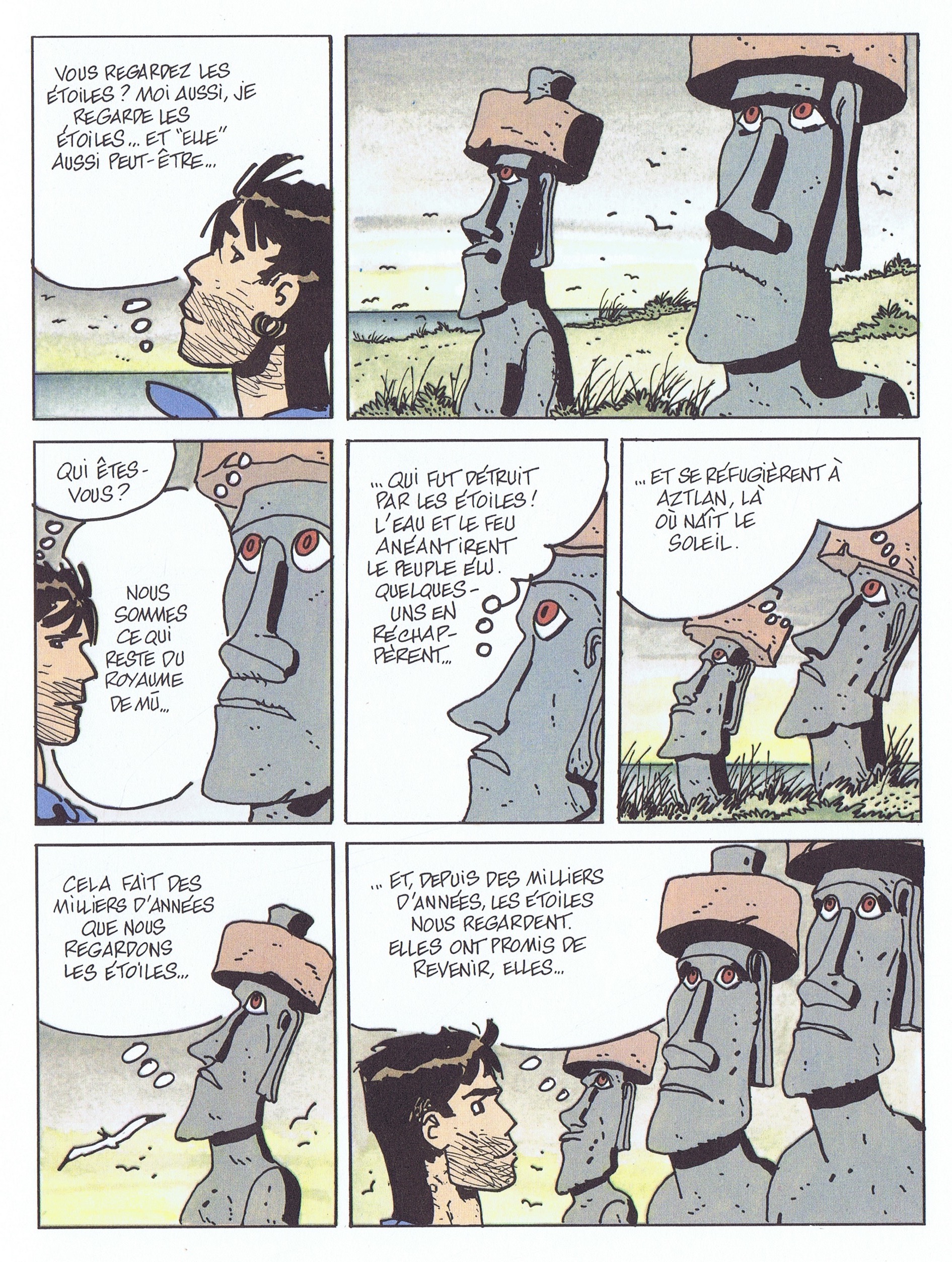 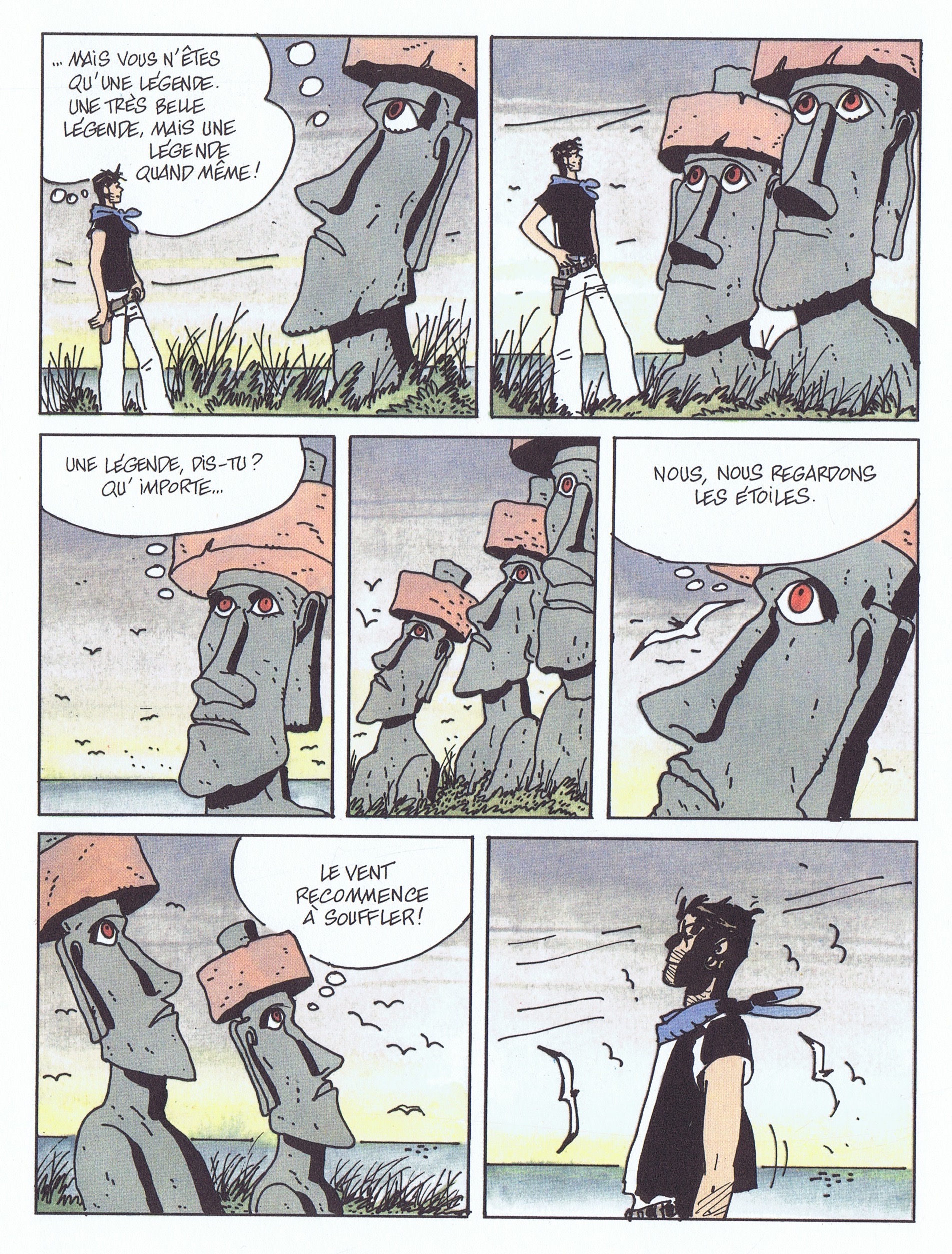 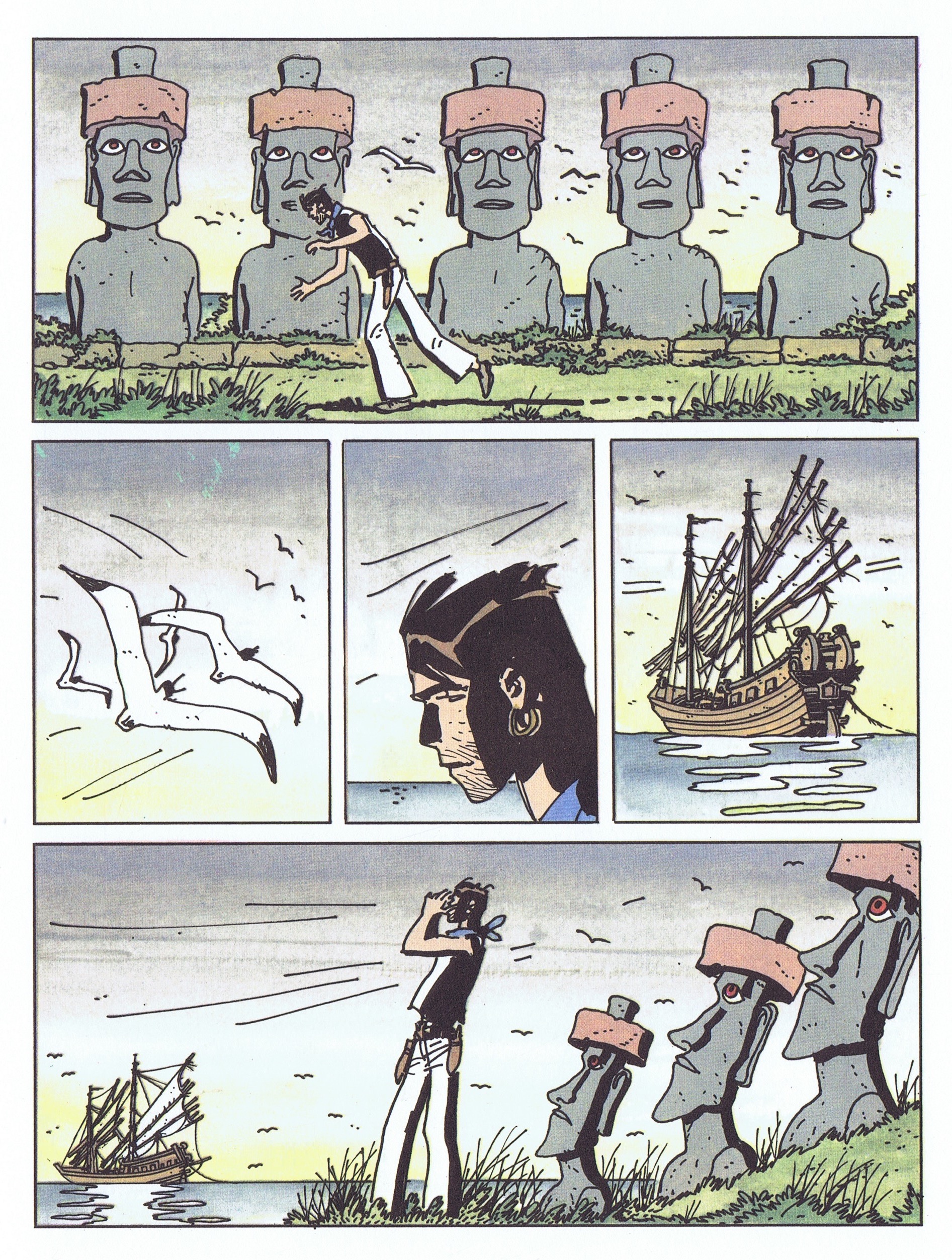 J’avais un rendez-vous is above all the testimony of a life, and is situated between a logbook and a notebook of multiple inspirations. While reading it, one embarks on a journey not to the real Pacific, but to the footsteps that Hugo Pratt left along the beach of his fertile imagination stimulated by the beauty of the islands. The real asset of this album lies in its abundant and superb watercolors, which, although stereotypical (especially regarding the female representations, as unfortunately too often), will not fail to inspire in turn. Corto Maltese, here I come! 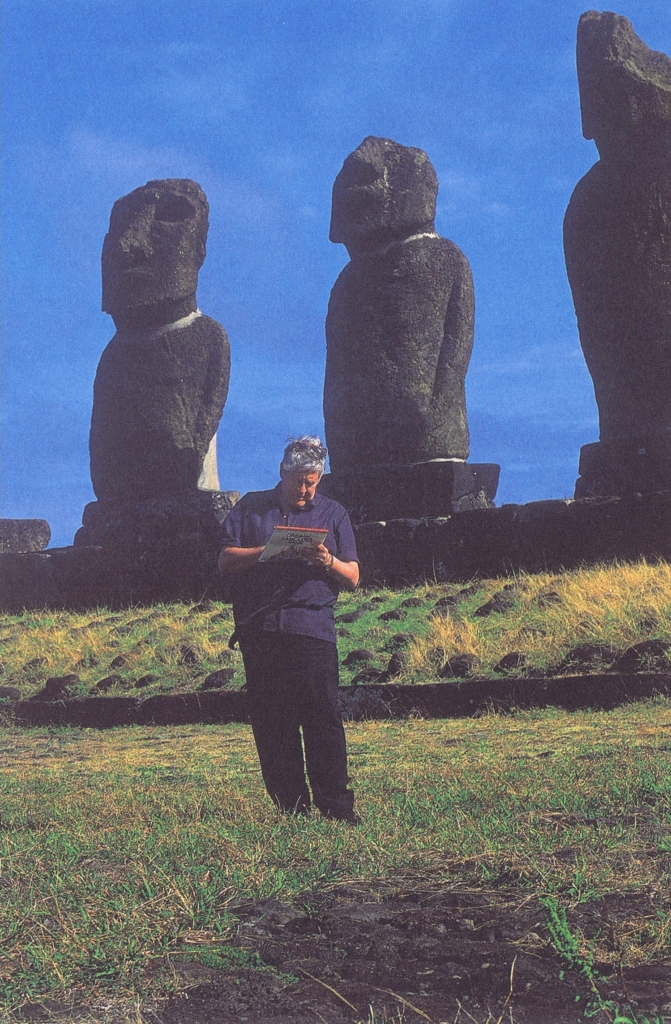 "The next morning we reached the right place and saw the dawn at the foot of the Moai, along Anakena beach. I have rarely seen Pratt so moved. In fact, Pratt travelled more to experience places than to discover them. For him, going to the Pacific after all the pages he had drawn with Corto Maltese, Capitan Cormorant, or even Treasure Island, was to find the landscapes that had fed his imagination. He didn't try to document a place and then draw it, simply because he had already done the drawings. His journey was a nostalgic one, in which he sought to reanimate the fascination that, since his adolescence, had driven him to draw. He was looking for the places he had dreamt of. »2 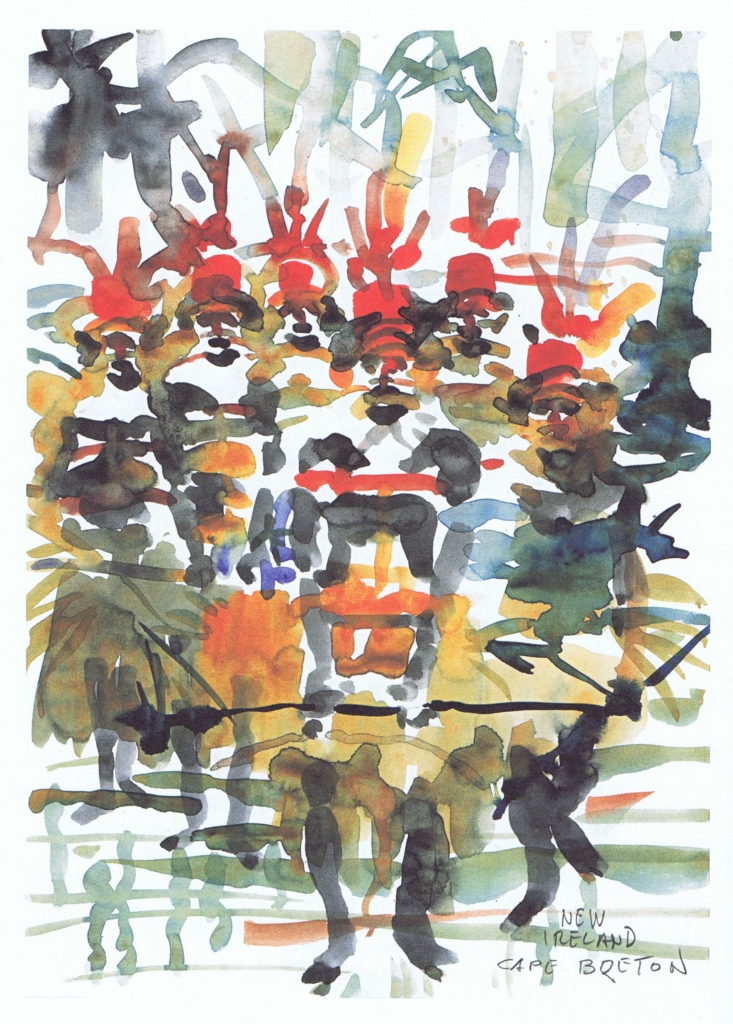 Header: Excerpt from a plate from the album Mû of the adventures of Corto Maltese, reproduced in Pratt, Hugo, 2020. J’avais un rendez-vous. Le Tripode editions. p. 47.