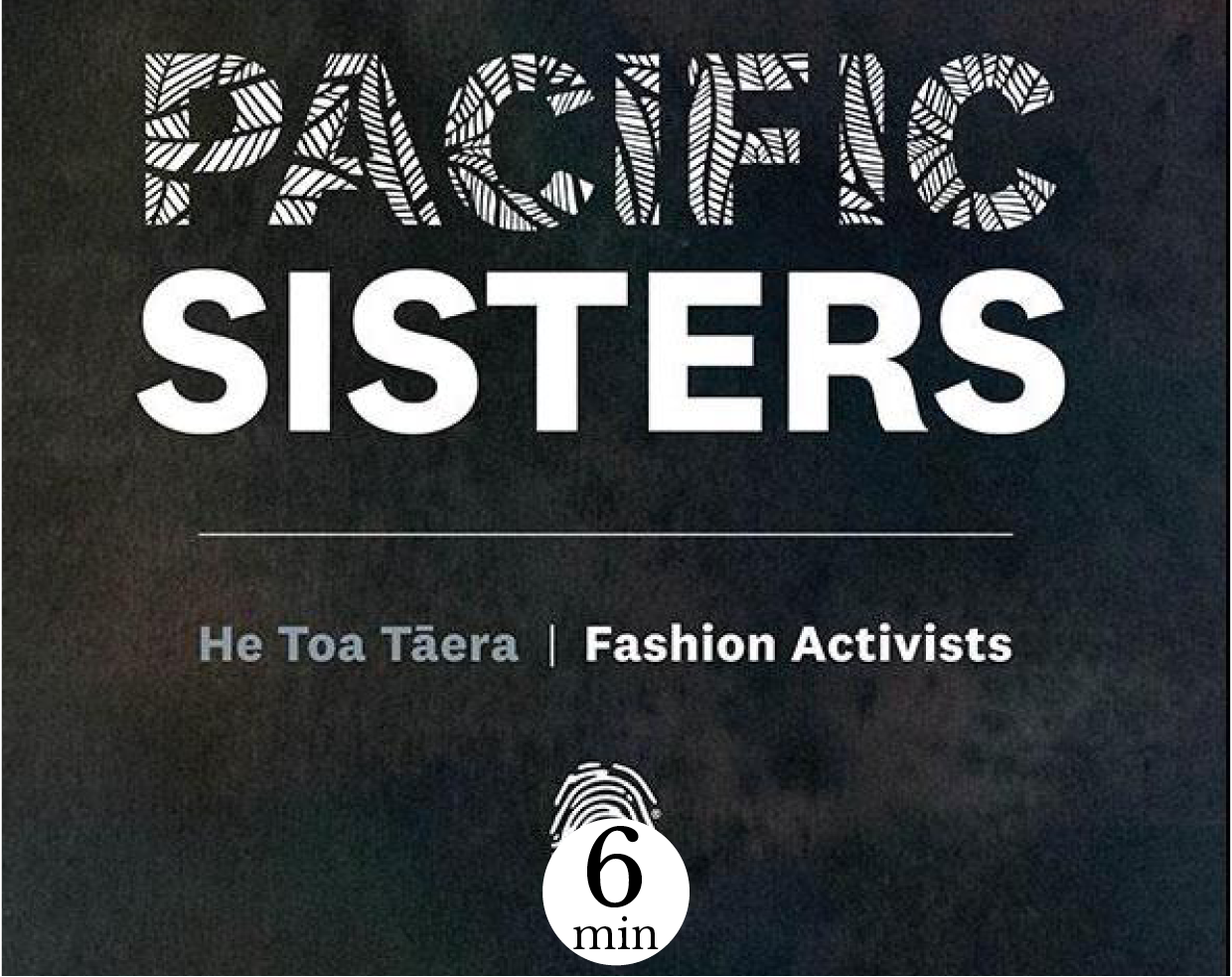 On March 17th, the Te Papa Tongarewa Museum inaugurated its new Toi Art gallery dedicated to Pacific art with an exhibition entitled "Pacific Sisters: Fashion Activists". Dedicated to the Pacific Sisters collective, this exhibition is intended to offer a retrospective view of their work, an opportunity for Casoar to introduce you to this major entity in contemporary Pacific art.

Historically speaking, the social sciences have long shunned women, who did not seem to be worthy subjects of study in a predominantly male academic environment. With a few exceptions, it was not until the 1970s and the Women's Studies movement that women began to take their rightful place in history and anthropology.

With colonisation and evangelisation, new sexist and racist stereotypes were imposed on Pacific women. Often confined by the churches to the role of Victorian housewives, they were at the same time represented in an exotic and sexualised way by Western artists such as Paul Gauguin. Far from the clichés, Pacific women present and past offer strong and varied characters. Leaders, activists, mythological figures, artists, women have marked and continue to shape the history of the Pacific. This is why Casoar has decided to dedicate a series of articles to these women, their history, their achievements and their representations. "Women from the Pacific" will thus take you on a journey of discovery of strong historical figures, artists, the history of gender stereotypes and anthropological works devoted to the place of women in Pacific societies. And what better way to inaugurate this series than to introduce you to the Pacific Sisters?

This mostly, but not exclusively, female collective energetically tackles the clichés surrounding the representation of Pacific women through the composition of costumes staged during photo shoots, fashion shows or performances mixing dance, music and films. Sometimes compared by its members to Andy Warhol's Factory, the collective brings together personalities of diverse backgrounds and training, all born in Aotearoa/New Zealand, some of whom have established themselves in their personal careers as major figures in contemporary Pacific art. Māori artist Lisa Reihana, who represented Aotearoa/New Zealand at the prestigious Venice Biennale of Contemporary Art in September 2017, is a long-standing member of the collective, which also welcomes artists such as Suzanne Tamaki, Ani O'Neill and Rosanna Raymond.

Founded in 1992, Pacific Sisters appeared at a key moment in the history of contemporary Pacific art. In the 1980s and 1990s, a new generation of 'urban Polynesians' emerged in New Zealand/Aotearoa, raised in cosmopolitan cities such as Auckland, which welcomed communities from all over Polynesia. This particular position is then claimed through the term "Pasifika". As Karen Stevenson explains, "Pasifika combined fashion, music, journalism, photography, dance, theatre, film, literature and the visual arts, thereby ensuring not only a presence but also a voice that could assert a Pacific identity".1 This movement involved the appropriation of new art forms that were perceived at the time as not belonging to Pacific cultures and the assertion of an urban culture nourished by rap and hip hop music. It thus reflects the questions of a generation 'caught between cultures', in the words of Jemaina Tiata2, but also its rejection of the clichés and stereotypes associated with Pacific cultures as well as the racist discrimination still suffered by these populations.

As Rosanna Raymond explains, the Sisters do not necessarily seek to fit the Pasifika label but rather define themselves as urbanites seeking their identity as members of a marginalised community within a predominantly white society, a product of colonisation. Art thus becomes a way for them to articulate their stories.3

It is these diverse stories that the Sisters sometimes use in their performances. One of their most famous shows is 'Ina and Tuna', a performance staged for the opening of the Bottled Ocean4 exhibition in 1994 at the Auckland City Art Gallery. These two characters, the beautiful young woman Ina and Tuna the eel king, are present in many Pacific mythologies but there are different versions of their story. The staging of this legend through two costumes representing the two characters was thus a way of evoking a history that is both pan-Pacific and specific to each island, a duality that can be found within the Pacific Sisters themselves, who come from different cultures in the region.

These costumes are inspired by both 'traditional' forms and materials, but also incorporate elements of urban culture such as jeans and synthetic or recycled materials. They are often composed of a large number of pieces. Their best known work, the 21st Sentry Cyber Sister costume (see here) in Wellington's Te Papa Tongarewa, has no fewer than 27 pieces. The Sisters call this process of accumulation 'accessification'. Rosanna Raymond describes the costumes created by the collective as "layers of history "5  and the elements used as parts of the artists. Here we find an issue that runs through contemporary Pacific arts, that of mixed identities, resulting from miscegenation and migration. As Karen Stevenson points out, many people in the Pacific reject the term hybridity as conjuring up images of dislocated identities rather than doubled identities6, the famous 'layers of history' put forward by the Pacific Sisters. Taken together, the pieces that make up the Sisters' work reinforce each other in the same way that the collective work reinforces the members of the group.7

These costumes are a way for them to highlight their complex identities and to challenge the clichés associated with the representation of Pacific people, particularly women. The exhibition dedicated to them at Te Papa refers to them as 'activists' acting through fashion, a way of referring to their commitment to challenging racist and sexist stereotypes. As Rosanna Raymond explains, the members of the collective have themselves had to confront these stereotypes in the course of their careers. At the time of the collective's creation, its members were generally marginalised because of their mixed-race background and the Pacific Sisters were a way for them to carve out a space for themselves to exist.8 As a model and stylist of Samoan origin, Rosanna Raymond testifies to the racism that permeates the fashion world which led her to feature darker-skinned and physically diverse models in her work with the Sisters. Photographs by Vivienne Haldane taken in 1993 featuring the collective's creations (see here) are now on display at the Te Papa exhibition, but as Rosanna Raymond explained at the time they were taken, no magazine would print them: "they were too strong and the models too brown ".9

In addition to showcasing models that reflect Pacific populations, Pacific Sisters also offers alternative representations of Pacific women. "The Pacific female body has been shaped by Western ideals. We have been politically and culturally disempowered by the classic Victorian framework: the woman stays at home and looks after the man. We have been erased; the Pacific women we knew have disappeared and become dancers in fibre skirts, selling holidays to tourists.10 Rosanna Raymond emphasises the Pacific Sisters' desire to value mana wahine11, the power of women: 'We are strong women, we are leaders, we are active and generous in our communities and we pass on valuable knowledge to our young people'.12 With her flamboyant feathered costume and video tape skirt, 21st Sentry Cyber Sister, seems to be the embodiment of this strong, multifaceted woman. Guarding the Te Papa exhibit, she is the kaitiaki, the guardian, and leaves no room for racism in her territory.

Its presence in these rooms, like that of the many other works by the Sisters, is no doubt no accident. Indeed, the appointment of a woman of Pacific origin, Nina Tonga, to the position of curator dedicated to Pacific arts has certainly played a major role in the celebration of this major collective about which, paradoxically, little has been written. Unclassifiable, the Pacific Sisters' strong works and spirited performances offer another image of Pacific women, one that is exhilarating and exciting. In front of their creations, as Karen Stevenson rightly states, "the energy created is contagious: the general public is dazzled".13

3 Fisher, Ginny. 2018. « Shining a Light on the Pacific Sisters’ Artistic Legacy » in Viva http://www.viva.co.nz/article/culture-travel/shining-a-light-on-the-pacific-sisters-legacy/#.Wp9Birefqw8.facebook
« We aren’t trying to be Pasifika necessarily, we are urbanites trying to find our identity within a white settler, marginalised Pacific Island community. Art is a way we can articulate our stories. »

7 https://collections.tepapa.govt.nz/object/301427
« We gave not only costume pieces, but parts of ourselves. Each individual piece gains strength from coming together with the others, like us working together as a group.» (Rosanna Raymond)

11 Mana wahine is a Māori concept that refers to the self-worth of women, their power conceived as complementary to the mana tane of men.