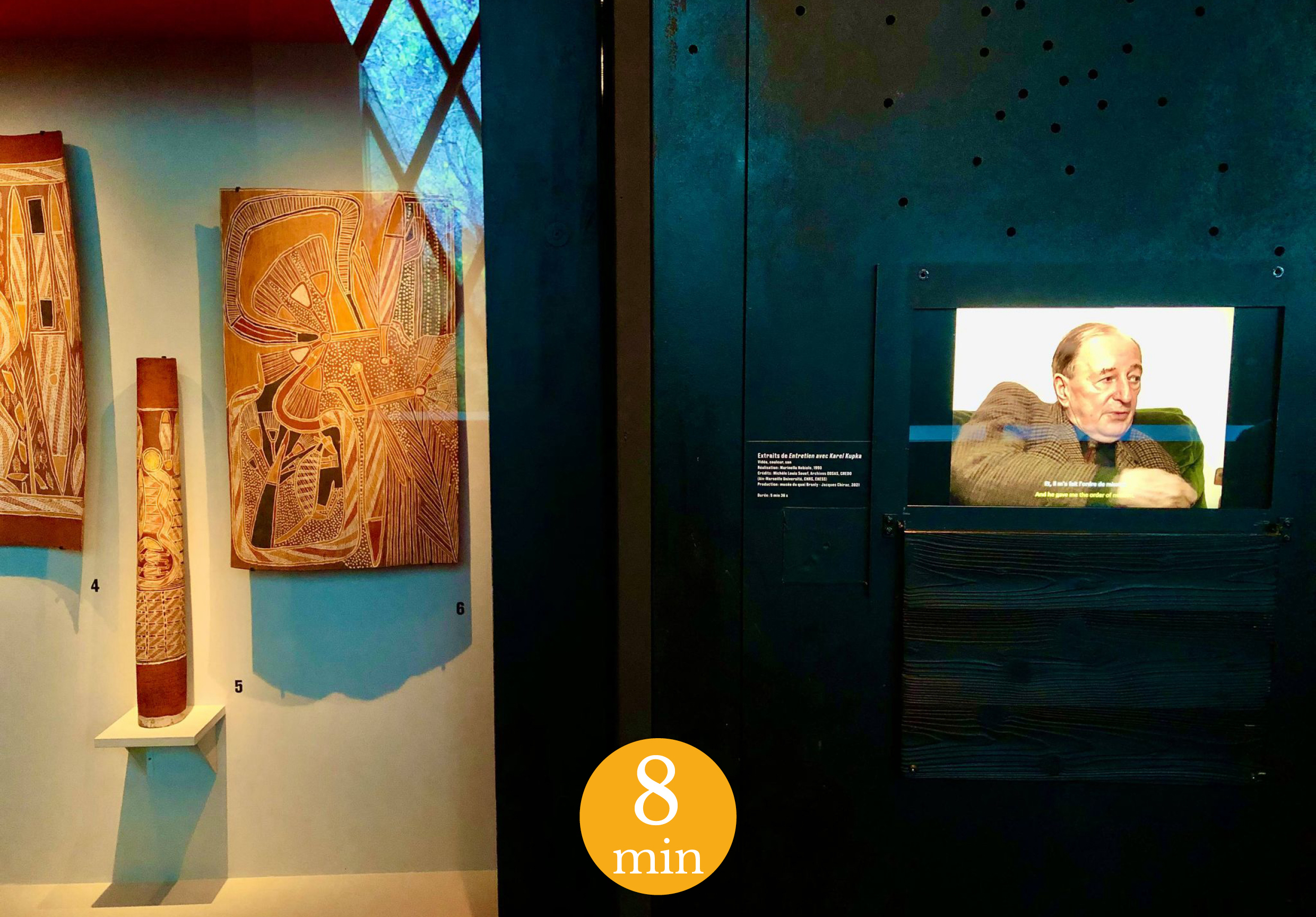 [Please note: Aboriginal and Torres Strait Islander people should be aware that this article may contain images or names of deceased persons in photographs or printed material.] 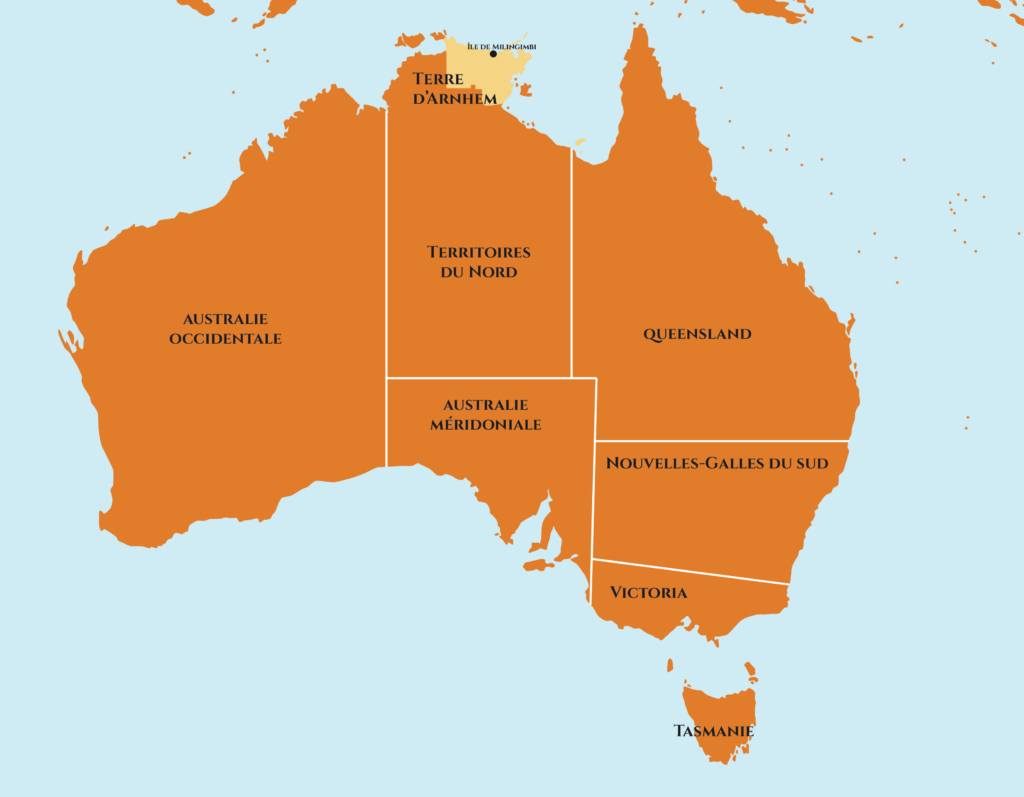 Chosen in the yolŋuvernacular language, the title of the exhibition refers to water (gapu) and more precisely to Guḻarri, a set of rivers flowing into the sea, towards the island of Milingimbi (Arnhem Land), belonging to the Yirritjahalf. The title also evokes the mother-child relationship, yothu yindiand thus the complementarity between the Dhuwa and Yirritja halves into which all beings and things in yolŋusociety are divided, including salt water and fresh water. The title of this exhibitions which is a foray into Arnhem Land thus immediately evokes the connections between things, relationships, and collaboration.

The genesis of this exhibition started during the first lockdown period that the whole world - or most of it - experienced in spring 2020. Nicolas Garnier, head of the MQB-JC's Oceania heritage unit, and Jessica De Largy Healy, anthropologist and researcher at the CNRS (LESC, Nanterre), were about to go on a field trip to Arnhem Land as part of a research project entitled "Mapping a collection: the bark paintings of the Karel Kupka collection (Arnhem Land, Australia)" initiated within LaBex Les passés dans le présent hosted by the University of Paris Nanterre.1 This large collaborative project had a double objective. On the one hand, it aimed to bring together on a single digital medium all the bark paintings acquired by the artist and anthropologist Karel Kupka (1918-1993), currently dispersed between the MQB-JC in Paris, the Museum der Kulturen [MKB] in Basel (Switzerland) and the National Museum of Australia in Canberra. On the other hand, on the basis of an experimental cartography and by considering the paintings of this collection as virtual cartographic supports, the project intended to address the question of the Aboriginal environmental memory by consulting the descendants of the painters. Partners included museums holding works from the Kupka collection, the Centre de recherche et de documentation sur l'Océanie - CREDO (Aix-Marseille University, CNRS, EHESS, CREDO UMR 7308), as well as the Milingimbi Art and Cultural Aboriginal Corporation and Crocodile Islands Rangers, a program dedicated to the protection of Arnhem Land's environment and territory. With Covid-19 forcing the people involved in the project to remain isolated, this research turned into an exhibition which not only was created in a twelve months period but also digitally, as the pandemic still did not allow for travel. Long sessions of consultations and virtual round-trips between the Parisian curators and the Milingimbi Art and Cultural Aboriginal Corporation have nevertheless allowed this project to become a reality, with the support of the AUSTRALIA NOW France 2021 program and the LaBex Les Passées dans le Présent, Investissements d’avenir.

While the artworks presented - bark paintings and sculptures - all come from the collection gathered by Karel Kupka in the 1960s, in Arnhem Land2 , it is less a question here of deciphering it than of allowing Aboriginal people the possibility of reappropriating it. Thus, many works have been renamed by them. Jessica De Largy Healy first chose the theme of water (gapu) for the exhibition which is not usually given much prominence as the Western viewpoint often perceives Australia as an arid territory. She then selected about sixty works from the collection corresponding to this theme. Consultations and reflections by members of the art center finally led to the choice of twenty-five of them. Therefore, the vitrines of the exhibition are airy and allow visitors to really appreciate each work. Within the art center, the people working on the exhibition were numerous and consisted of a group of Yolŋu, non-aboriginal (balanda) Australian intermediaries and two elders, each representing one half, Dhuwa and Yirritja. They are the co-curators of this exhibition: Joe Dhamanydji, painter, ceremonial leader of the Gupapuyngu clan and co-director of the art center; and Ruth Nalmakarra, painter and elder of the Liyahawumirr clan, director of the art center. The beginning of the exhibition presents them at length, showing visitors their importance in their clans as elders, holders of ceremonial legitimacy.

Entrance of the exhibition © Garance Nyssen

Through the scenography, the exhibition emphasizes how a person may, or may not, express themselves about certain stories or motifs depicted on the paintings. The partition of the world into halves also applies to these elements, which is reflected in the exhibition's spatial layout, designed by the Yolŋu community. For example, some of the displays have a red background, for the Dhuwa half, and others a yellow background, for the Yirritjahalf. Moreover, only the descendants of the painters on display can tell the stories depicted in the images. The labels are in fact not formal descriptions of the paintings but spoken accounts collected from the various Yolŋu people who hold the rights to them. After their recording, they were translated by Salome Harris, a linguist. This choice makes it possible to give voice to a set of different Yolŋu personalities whose names are given in each label. The texts thus retain a form of orality, specific to the narratives and their enunciation by the Yolŋu people who do not give them a fixed, written form. <em<Yolŋu vernacular names and terms are widely featured in the texts of the labels as well as in the tour booklet where they are accompanied by a translation in parentheses. Similarly, a glossary included in the tour booklet brings together all the terms with their short explanation instead of simple translations which would distort the meaning of these words.
Orality is at the center of this exhibition also by the presence of a mediation device designed with the association PERCEVOIR3 and the support of the CNRS. It is about "Discovering painting through listening". Thus, you can for example apprehend the first painting exhibited, the one on the poster of the exhibition, through several audio tracks curated by a group of visually impaired persons but also seeing persons, including the Parisian curators. These audio tracks are available on the MQB-JC website4 and via the QR code in the exhibition booklet. 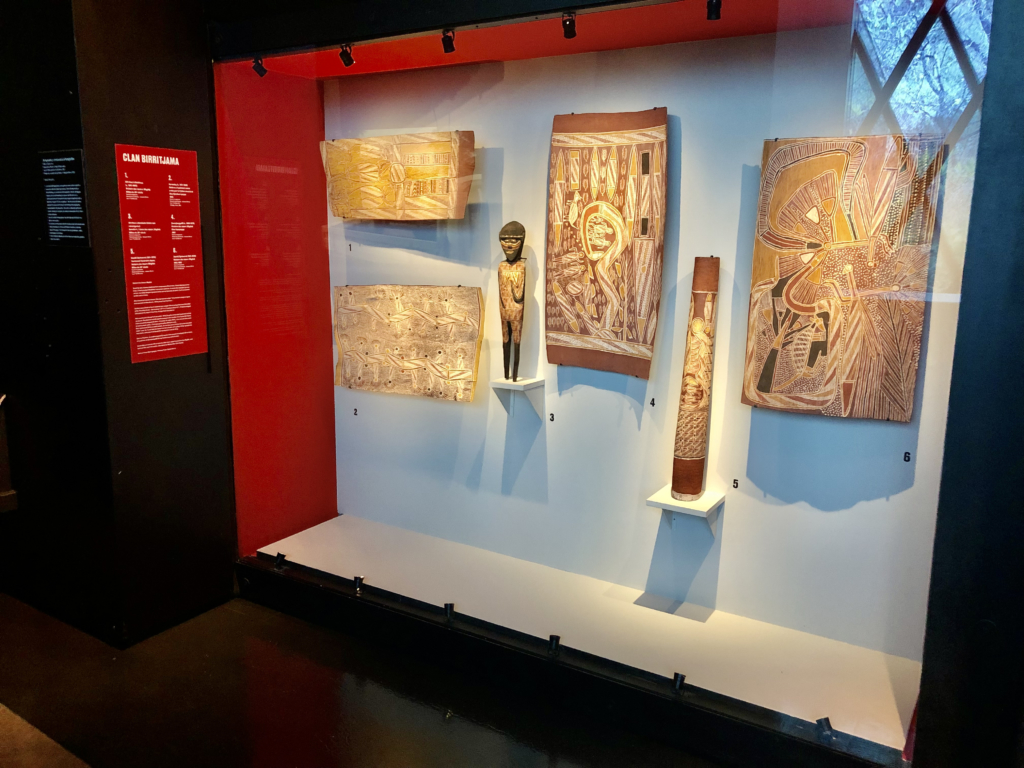 Picture of one of the exhibition vitrines © Garance Nyssen

Only four texts within the exhibition are written by Jessica De Largy Healy and Nicolas Garnier, in order to present the genesis of the exhibition and give some explanations about the Milingimbi community and the Kupka collection, as well as to introduce the biographies of the main interlocutors. The rest of the exhibition was entirely thought out and commented on by the Yolŋu interlocutors, the place of the Parisian curators ultimately being that of facilitators and intermediaries. Jessica De Largy Healy explains, for example, that for the poster she had proposed a painting that she thought would be public, i.e. visible to all. However, the Yolŋu community did not want to use it because a ceremony for the ancestor depicted was taking place at the same time and the painter's descendants could not be easily contacted. No one else had authority over the painted designs, so another choice had to be made.5 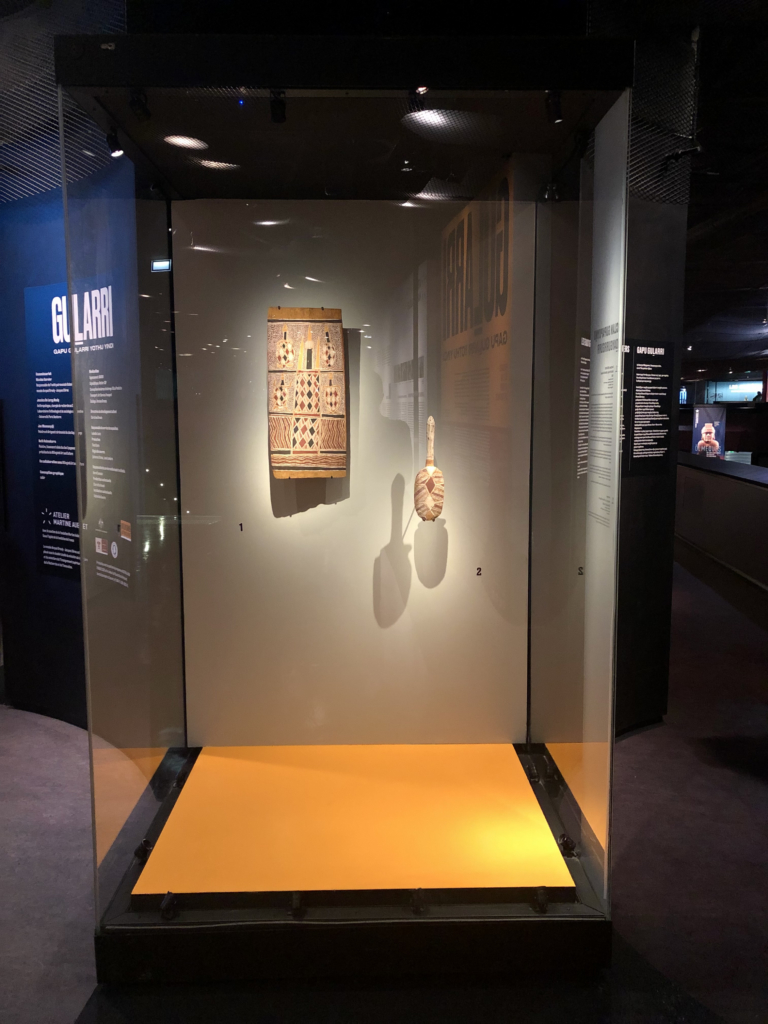 This way of shaping an exhibition is not new and is already widely implemented in other museums in Canada, the United States or Australia for example. However, this collaboration in the strongest sense of the term seems to be without precedent at the MQB-JC and announces, as its president Emmanuel Kasarhérou mentioned, a new way of thinking about the collections, the museum and its relationship to the so-called source communities, descendants of those from whom the collections were acquired. However, the visitor will notice that the principle of leaving total freedom to the communities meets some limits. Indeed, next to the film Gamaḻaŋga Dhuwa miyapunu dhäwu, the story of the Gamaḻaŋga Dhuwa turtle, there is a label with a warning. This one points out that some of the film's passages may offend the public. This ten-minute film made by Leon Milmurru for the exhibition shows the "hunting, cooking, cutting, sharing, and eating" of a sea turtle, which was intended by the Gorryindi clan to show visitors their connection to this animal and their stories and songs related to the ancestral turtle. The moments of the cutting having been judged too crude and rough for the Western public, only the sound of the film was preserved, the translation of the words being affixed on the black screen. If our ears could hear the relief of some visitors concerning this choice, this element nevertheless invites us to reflect on the limits, the stakes and the challenges of cultural exchanges in museums. 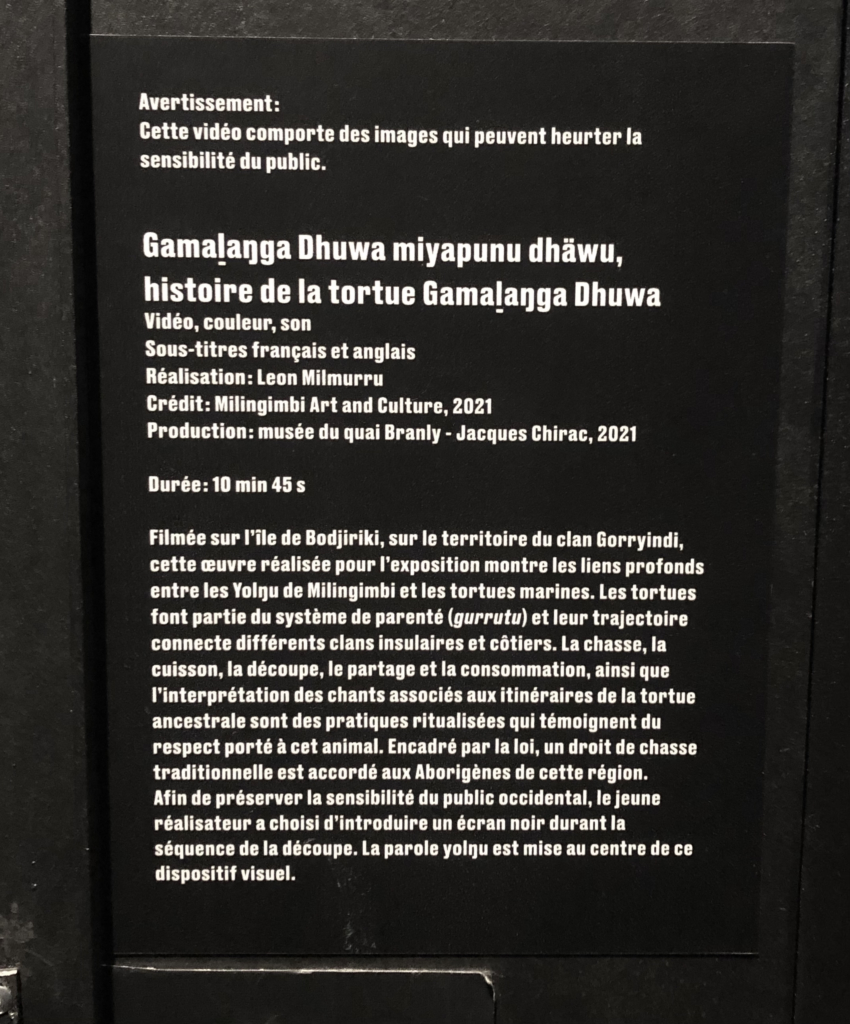 The figure of Karel Kupka, initiator of the reunion of this collection, of which we see only a very partial selection here, appears only at the end of the exhibition where an interview in video format is presented. Some quotations from descendants of the aboriginal painters he knew are also transcribed on the walls, which is, again, a way for the Yolŋu people, to "reappropriate" Kupka and his artistic and collecting approach. These choices are a counterpoint to more conventional exhibitions that give ample space to the construction of a given collection, in order to focus here on the works that are part and parcels of this collection. Rather than talking about the past, the exhibition uses certain works from the collection for their prominence or resonance in the present, as a medium for meaning and relationships between members of the Yolngu community past and present. This exhibition shifts the focus from the MQB-JC to the Milingimbi Art and Cultural Aboriginal Corporation and its constituent communities for true "indigenous participation". 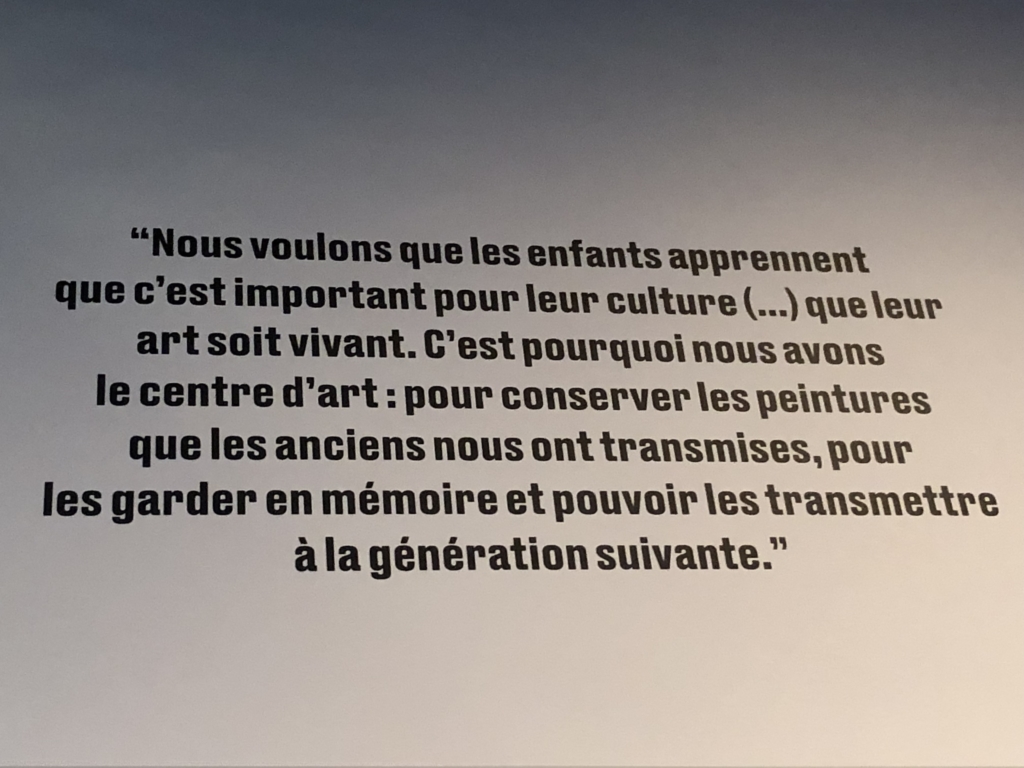 This exhibition confirms the relevance and richness of the events organized on the Martine-Aublet mezzanine, which, in just a few vitrines, highlight current research issues. It also illustrates the difficulties and challenges inherent in building collaborations around European museum collections that must confront cultural differences, budgetary constraints, time limitations, and long distances, even when Covid-19 is not here!
Other collaborations with the Milingimbi community with European museums, including the MKB and the Musée d'Ethnographie de Genève (Switzerland), demonstrate the developing links between Europe and Arnhem Land in the documentation and knowledge of ancient Australian painting collections. It will be interesting to see if further research of this type will be initiated around the Kupka collection at MQB-JC.

The exhibition Gapu Guḻarri Yothu Yindi, Water Landscapes in Northern Australia is on view at the Musée du quai Branly-Jacques Chirac until September 26, 2021.

We thank the curators for their invitation to a private tour of the exhibition and especially Jessica De Largy Healy for her answers to our questions.

2  The production of bark paintings highly grew in the 1950s-60s in Arnhem Land. They show ceremonial motifs or ancestors representations on tree bark which often is eucalyptus. These paintings were often made in order to educate strangers to local practices but also in order to sell them and make land claims. Numerous westerners collected these bark paintings which are nowadays slowly reclaimed by Aboriginal people.