"I came to France with the intention of continuing the story.
In one respect, I am literally walking out of the lithographs.
I’m coming out of the picture and I’m in a repeat performance here in Rochefort.
However, the difference is that now the context has changed because this is all history. So the place where this context continues is in the museum."1 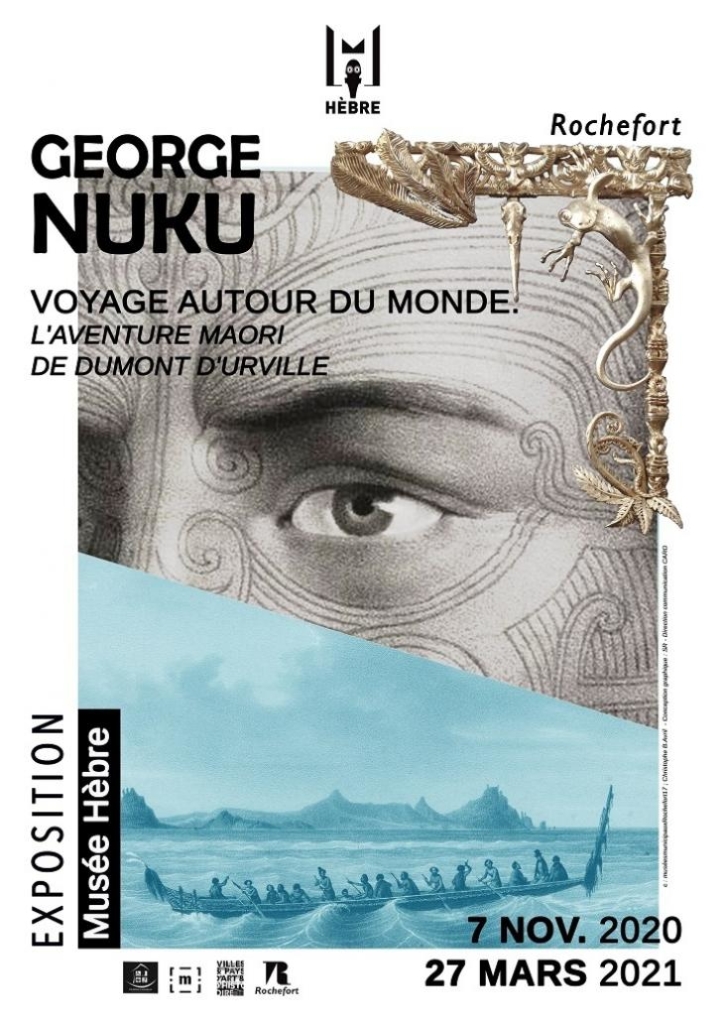 Originally scheduled to open on 7 November 2020, the exhibition Voyage autour du monde, L’aventure maori de Dumont d’Urville is the result of a seven year collaboration between George Nuku and the Musée Hèbre (Rochefort-sur-Mer). Due to the Covid-19 pandemic, the exhibition finally opened on 19 May 2021 and is on view until 28 August of this year.

While the pandemic has left us without access to museums for 6 months, George Nuku and the team at the musée Hèbre used this time to continue working on the exhibition. Opening the exhibition seven months later than originally planned has allowed George Nuku to create what he considers to be his most successful project to date.

The voyages of the Uranie and the Physicienne were under the command of Louis de Freycinet while the voyages of the Coquille (later renamed the Astrolabe) and the Astrolabe were under the command of Jules Dumont D'Urville. These three men were all part of the Astrolabe's voyage in search of the remains of La Pérouse's 1788 expedition. On the Astrolabe, Louis De Sainson was the official draughtsman, Louis Le Breton was assistant surgeon, and Pierre-Adolphe Lesson, pharmacist and botanist. On their return, the three men participated in the creation of the various atlases and volumes of the Astrolabe's voyages and, thanks to the lithographs produced on their return, made it possible to keep a record of the drawings made duringt the expedition. 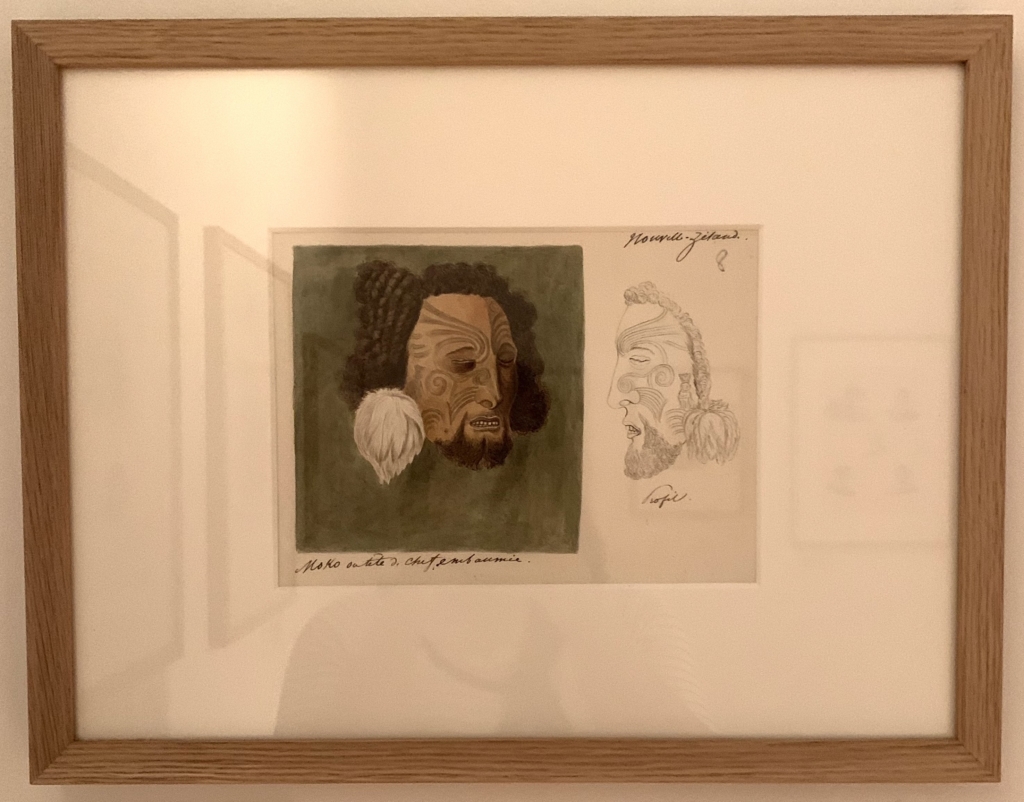 Pierre-Adolphe Lesson (1805-1888), New Zealand. Moko or mummified chief head. Profile. Ink and watercolour. Representation of one of the three mokomokaï collected by René-primevère Lesson during the trip of the Coquille in New Zealand in april 1824. Médiathèque de Rochefort, Fonds Lesson. © Photograph : Clémentine Débrosse

These are the lithographs that George Nuku discovered thirty years ago and which are at the heart of the exhibition project at the Musée Hèbre. Enlarged, re-coloured, modified and printed in large format, these highly realistic images allow George Nuku to create the link between past and present that is so dear to him.

“I’m recontextualizing this past interaction in a way that I can because I didn’t live 200 years ago. I live now! So I want to bring the George of now to the story, and I do that by using modern techniques […] and materials [...] to invoke and to bring to the conversation the past. To make the older new, to see the old in the new eye of today.
I’m not primarily interested in photocopying the past so much. That’s the job of other people. My job is to bring life to the past. To bring my particular life.”2

In the second and largest room, the lithographs take up a large part of the exhibition. They are complemented by numerous elements in plexiglass and polystyrene sculpted by George Nuku as well as by Māori objects from the collections of the Musée Hèbre and the Musée des Beaux-Arts de Chartres.
On each of the walls of this second and main exhibition room are reproduced, in very large format, the lithographs presented in the first room, but not only. Each of these lithographs are framed, or surrounded by polystyrene sculptures that reproduce traditional Māori motifs that can be found in architecture, sculpture or moko the art of Māori tattooing is explained here).

“They capture a people which is not scared of the Western world”.3 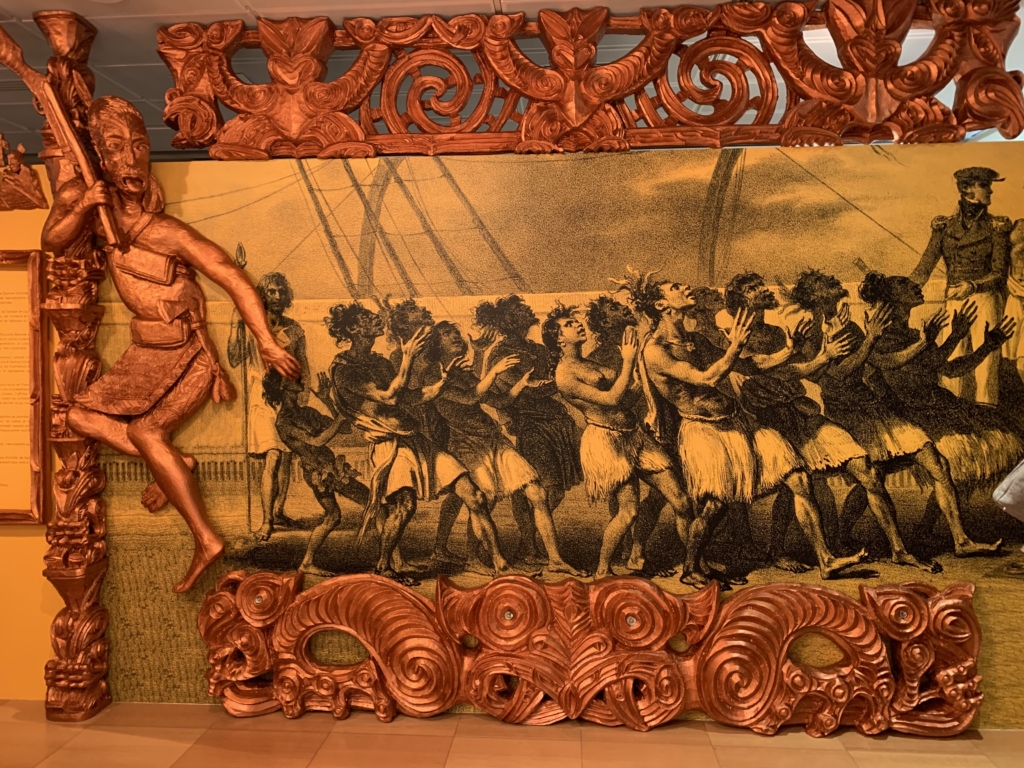 So large that one feels part of the image, this lithograph show a haka performed by Māori men and women of all ages on a colonial ship. The surrounding sculptures depict the god Tane and his brothers, and also a warrior figure - a kind of self-portrait of the artist - which again plays on the past and the present. This Māori warrior wears his moko and his usual attributes, but with some additions: he carries cartridges as is visible on his waist and torso, and a rifle on his shoulder which he holds like a club. 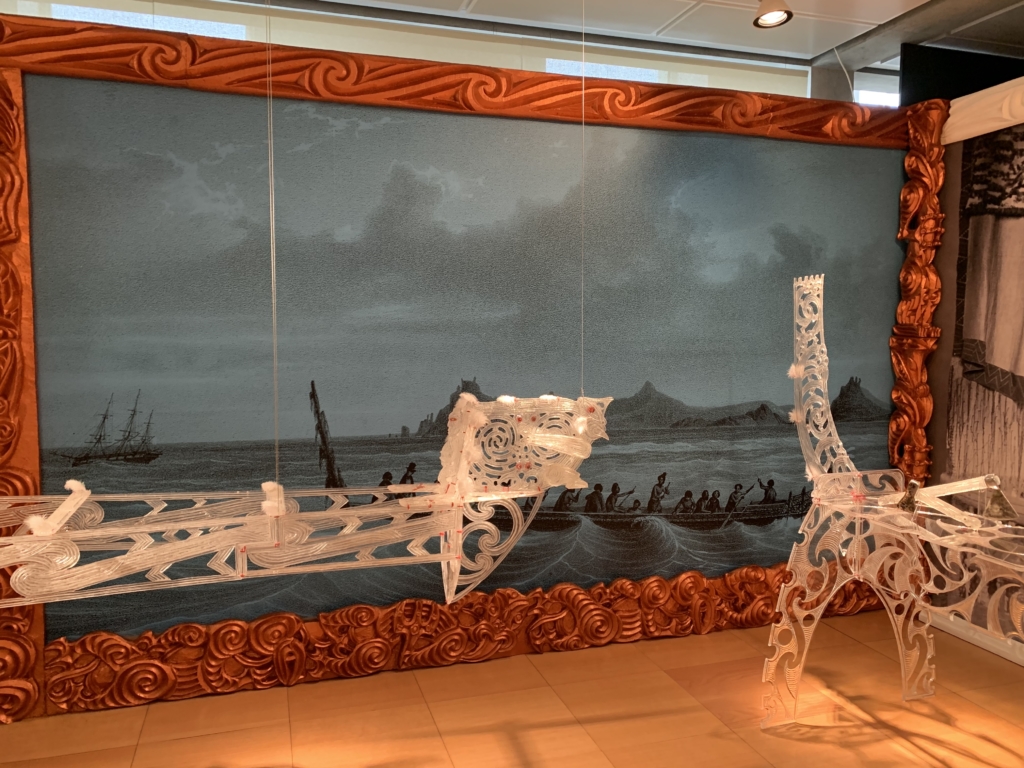 Opposite this scene is another lithograph, this time showing two scenes of waka (canoes) being launched into the ocean, with a plexiglass canoe in front of it echoing the image.
Between these two lithographs, blue and yellow respectively, a lithograph treated in negative fills the largest wall of the exhibition in front of which are three plexiglass cases depicting three Māori: a man, a woman and a self-portrait of George Nuku.

Each of these vitrines features the moko of the person depicted with an "exaggerated" moko for the woman's vitrine, as George Nuku himself says. Indeed, with the revival of the female moko, women are pushing the boundaries of female tattooing and creating new codes.4

In these three vitrines, the Māori representations carry artefacts (pendants, cloaks, earrings, clubs, treasure boxes) which come from the collections of the Musée Hèbre, the Musée des Beaux-Arts de Chartres or from private collections. Together, these representations and taonga (treasures) are, for George Nuku, his living ancestors.

In the centre of the room is a backlit 'portal' which is a portrait of a Māori woman. Adorned with a shark's tooth necklace, this sculpture is George Nuku's personal reinterpretation of the original drawing made by Louis le Breton during Dumont d'Urville's third voyage. Indeed, Nuku chose to represent this woman in the prime of life rather than old. This portal, very contemporary in its creation, establishes once again the link between past and present so dear to Nuku. 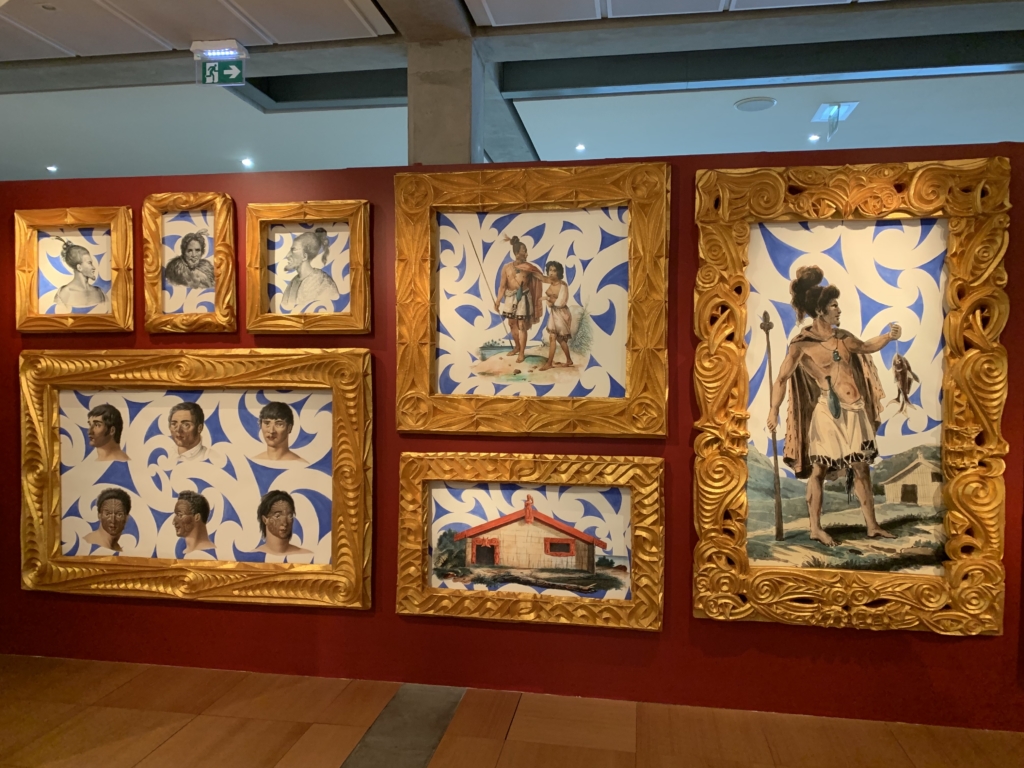 Indeed, on the other side of the room, a burgundy red wall is reminiscent of the European painting exhibition room at the Musée Hèbre. It was (and still is) customary in European museums to display European paintings on dark walls, in imposing gilded frames in a "salon" type hanging. It is this tradition of hanging that George Nuku wanted to evoke with this wall of lithographs presented in gilded polystyrene frames decorated with Māori sculptural motifs. He also added other motifs to the lithographs to fill in the background, in order to place the images in their original context, Aotearoa. According to Nuku, in presenting this set of lithographs in this way, he "elevates them to the status of classical art".8

In the centre of the room, on both sides of the portal, are two plexiglass works suspended from the ceiling: L'Astrolabe and Voyage Autour du Monde. These two works are direct references to Dumont d'Urville's circumnavigations. But not only that. Indeed, Nuku specifies that on the Voyage Autour du Monde, the circular motifs represent all the voyages: those of Dumont d'Urville, those of Captain James Cook, those of Nuku's Māori ancestors, as well as his own voyage.9 As for the Astrolabe, it was a measuring instrument that allowed sailors to calculate the elevation of the stars, but it was also the name of La Pérouse's ship, and then of Dumont d'Urville's ship, who later renamed the Coquille, l’Astrolabe in honour of La Pérouse. The Astrolabe, which is named after the navigational instrument that George Nuku considers to be the 'predecessor of the smartphone'10, was acquired, along with the Voyage Autour du Monde, by the Musée Hèbre and will therefore remain in the Rochefort collections. 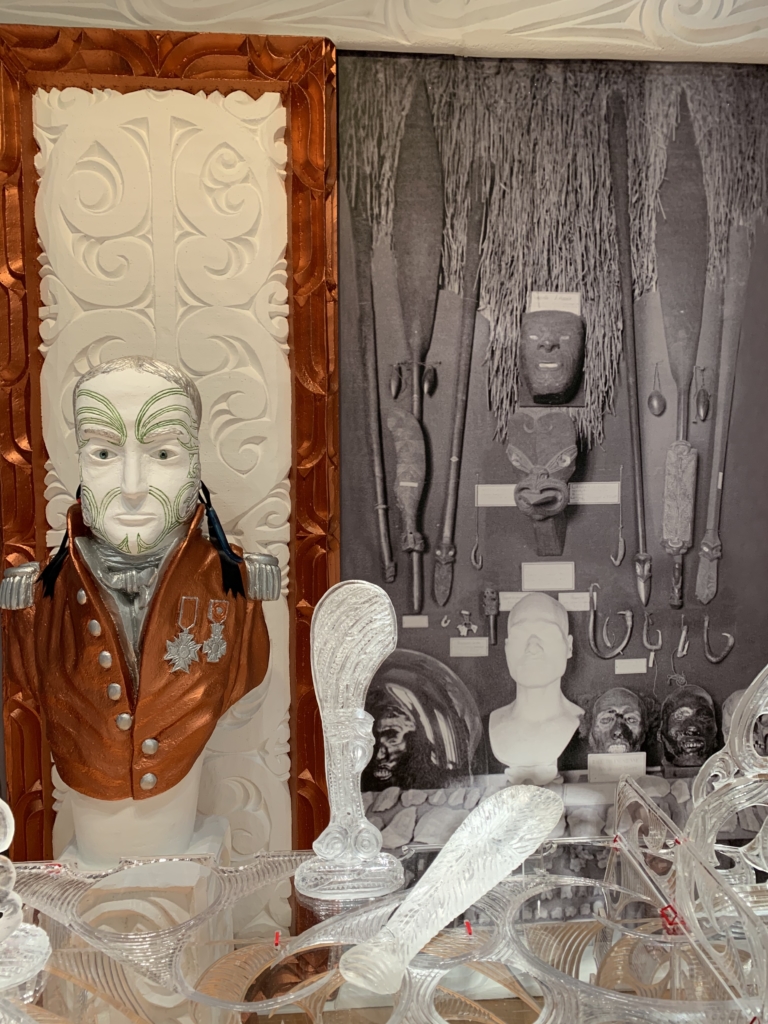 Finally, as a last nod to this link between past and present, George Nuku has created a very special portrait of Jules Dumont d'Urville. The portrait is displayed between two photographs of collections from the Caen Museum – destroyed by bombing during the Second World War. Behind them is a plexiglass table-canoe-display decorated with various Māori objects in plexiglass. This polystyrene portrait wears the traditional naval officer's outfit, but Dumont d'Urville's face is adorned with George Nuku's moko and his shark's tooth ear pendant. As a final gift to the 19th century explorer, George Nuku has adorned the naval officer's portrait with a jade earring, an object he had coveted during his voyage to Aotearoa/New Zealand, but which had been denied to him. Until 28 August, Dumont d’Urville will have one!

I would like to thank Claude Stéfani, Séverine Bompays and George Nuku for accepting to answer my questions and allowing me to take and publish these photographs of the exhibition Voyage autour du monde, l’aventure maori de Dumont d’Urville.

9 George Nuku comes from New Zealand and lived in the United States as well as in several places in Europe before settling in France where he still lives now.