Australie/Le Havre – L’intimité d’un lien (The intimacy of a link), currently on display at the Natural History Museum in Le Havre until 7 November 2021 looks back at a scientific expedition that was a key event in the history of the Western discovery of the Pacific. At the dawn of the 19th century, this voyage led 200 men embarked on two ships - the Géographe and the Naturalist - under the authority of Commander Nicolas Baudin, to New Holland (nowadays Australia). Among them were two draughtsmen: Charles-Alexandre Lesueur and Nicolas-Martin Petit, whose work is now kept in the Museum of Le Havre. Thus, the institution has taken on the responsibility of transmitting and sharing this unique and ancient testimony to Australian biodiversity and Aboriginal cultures. This link, which connects the port city to Australia, is the one highlighted in this exhibition, in a double historical and contemporary perspective.

The voyage of discovery to the Austral Lands, commissioned by the First Consul Napoleon Bonaparte, left Le Havre on 19 October 1800 with the objectives of mapping the southern coasts of New Holland, studying the fauna, flora and minerals and describing the populations encountered. From a scientific point of view, the expedition was a success: 100,000 naturalist samples were collected and a large number of new species were brought to Western knowledge. The illustrious scientists of the National Museum of Natural History in Paris saluted this victory in the name of science. Empress Josephine is honoured by installing marsupials and other live animals, witnesses to the exotic lands visited, in the menagerie of her residence at the Château de Malmaison.1 The other, barely unofficial, purpose of the voyage confronts England in a joint quest for political ownership of the region. Matthew Flinders' crew on the Investigator set sail a few months later and beat the French to their mapping venture. The two expeditions meet on the southern coast of South Australia at the point since named Encounter Bay .2

The exhibition in Le Havre is an opportunity to admire 220 drawings - very rarely exhibited because of their fragility3 - from the scientific observations made during the four years of the expedition. Following the desertion of the official draughtsmen of the Mauritius expedition in 1801, the mission was entrusted to Nicolas-Martin Petit and Charles-Alexandre Lesueur from Le Havre, who had initially been on board as assistant gunners and illustrators of the commander's personal journal. The former, trained in the neo-classical studio of the painter Jacques-Louis David, specialised in the representation of the populations encountered, while the latter stood out for his zoological drawings.4

Nicolas-Martin Petit died shortly after returning from the voyage, his drawings were kept by François Péron - in charge of naturalist collections during the expedition - and Lesueur, who prepared the publication of the expedition's results. Charles-Alexandre Lesueur pursued a career as a naturalist and palaeontologist, taking him to the Côte d'Azur, the United States and Saint Adresse (Seine-Maritime, France). In 1838, he bequeathed an important collection of naturalist specimens to the city of Le Havre, which then decided to create a museum of which he became the first curator. The drawings of the expedition gradually became part of the institution's collection after his death, thanks to his descendants.5

The graphic collection escaped the Allied bombing that razed the city on 5 September 1945, during the Liberation: they had been evacuated - along with some of the African and Oceanic objects - from the city shortly before. A short animated film produced by the Museum traces the eventful history of the institution from its creation to the present day.

The drawings by Charles-Alexandre Lesueur and Nicolas-Martin Petit are striking in their extreme detail. The artist Emmelene Landon (two of whose works are on display), says:

"I am struck by the precise clarity and applied tenderness in these works that I am seeing for the first time. The works certainly respond to a request, a precise specification for the Baudin expedition, but they manage to exist by their own means. The painstaking work is not laborious, it is a true quest for life. Aboriginal people, marsupials, plants and topographical surveys I see depicted impress me with their accuracy and the draftsmen's respect for the subject. They honour the mission of this expedition."6 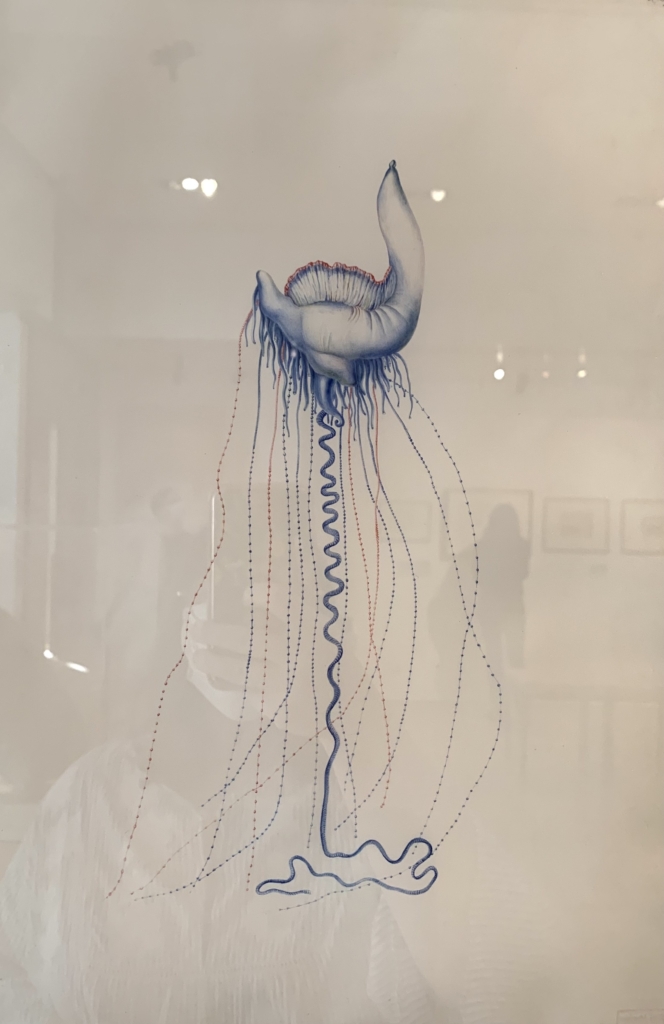 Charles-Alexandre Lesueur's zoological representations are so precise that it is thought that he had extraordinary visual abilities.7 He painted with a magnifying glass and a brush with two or three bristles. In order to fully appreciate the meticulousness of the work, the public is invited to observe the works through a magnifying glass. In a naturalist approach, the draughtsman's aim is to depict the species encountered as faithfully as possible. Even today, Lesueur's database is an invaluable resource for biologists. 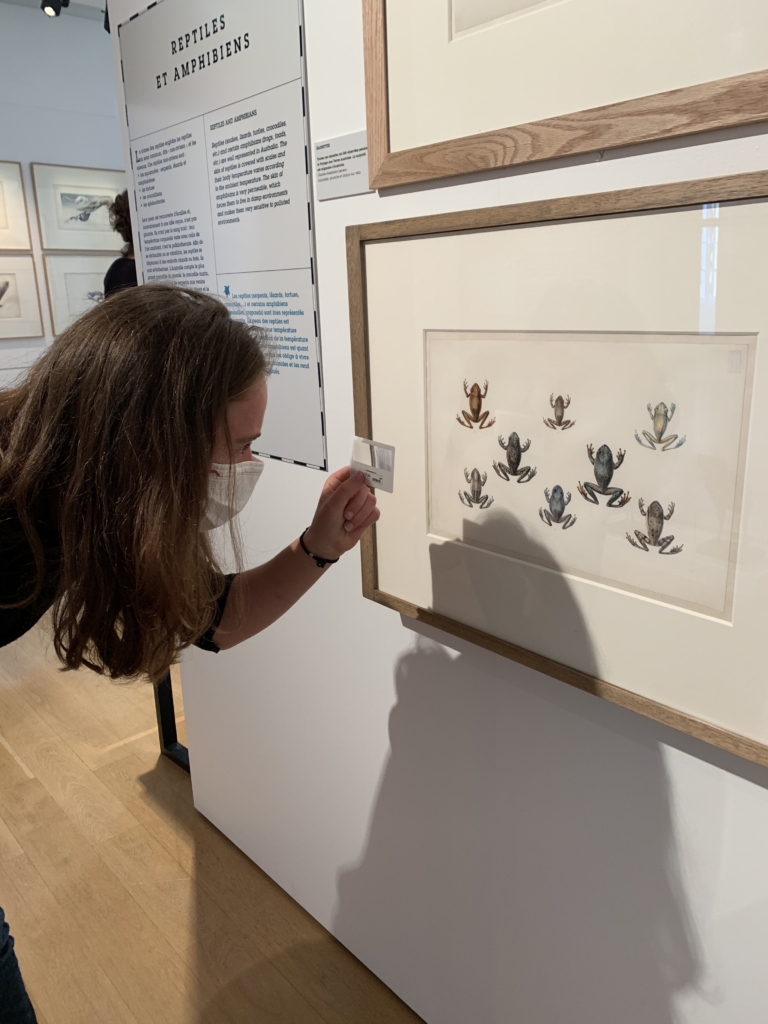 Soizic Le Cornec using a magnifying glass from the Museum of Le Havre to appreciate the precision of Charles-Alexandre Lesueur's drawings in the exhibition Australie / Le Havre - L'intimité d'un lien at the Museum of Natural History in Le Havre. © Photograph: Clémentine Débrosse

With a scientific ambition to bring back an imagery of the physical and social characteristics of the inhabitants of New Holland, Nicolas-Martin Petit highlights, in his human representations, the cultural and social marks observed on the populations: tattoos, scarifications, hairstyles, body paintings. However, his work is influenced by his neo-classical training: his subjects sometimes adopt postures that are specific to the canons of Western academic painting, and are represented according to an exotic vision of the "good savage".8 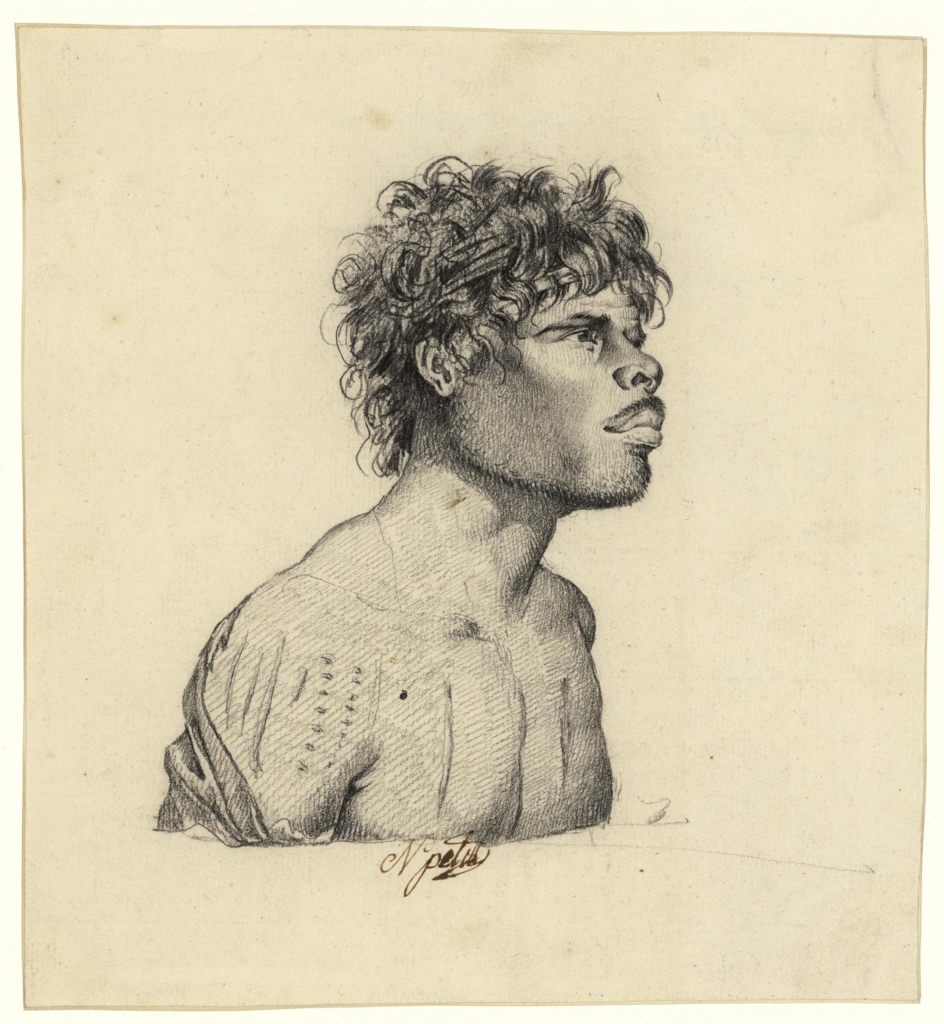 Visiting the exhibition: between drawings and contemporary art 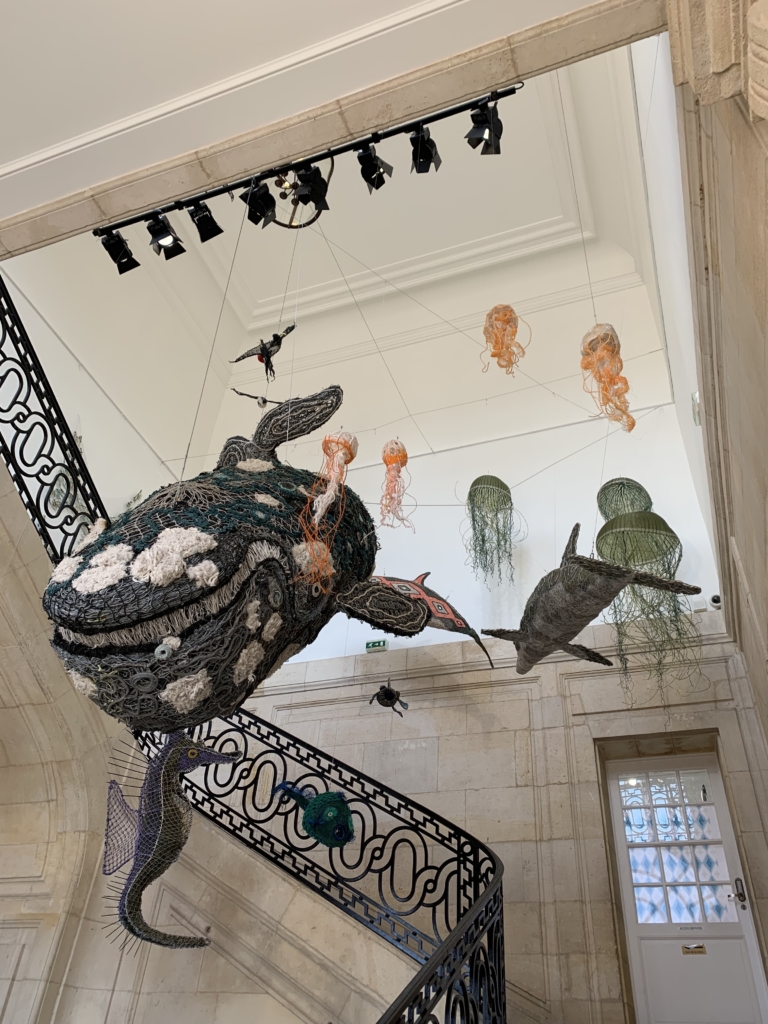 Ghostnet set in the stairwell of the Natural History Museum of Le Havre on the occasion of the exhibition Australie / Le Havre - L'intimité d'un lien. Photograph: Clémentine Débrosse

On arrival at the museum and after going through the formalities of entering the exhibition, it is a set of Ghostnets (a more detailed article on Ghostnets art is available here) that welcomes us to the Museum's stairwell. These sculptures of marine animals made from discarded fishing nets in the seas and oceans of northern Australia and the Torres Strait have quickly become emblematic of the ecological cause in Australia but also represent a new art practice born in the 2000s in the Gulf of Carpentaria and Torres Strait.

Whale, seahorse, turtle, jellyfish, fishes, frigate birds, all these marine animals typical of the Australian coast are not always very representative of the animals seen on our European coasts, which is why, during the commissioning of the Ghostnets to the indigenous communities, the curator Gabrielle Baglione requested the creation of two dolphins. Indeed, although very important to many Australian Indigenous communities, dolphins had never been represented in Ghostnets before. Made from 'large nets collected by the Australian Navy and eco-guards', the dolphins were 'made by the movement's two most renowned collectives [and] are at once a re-reading of important items in the Le Havre Museum - a drawing by Lesueur and a naturalised dolphin - [and] an artistic reinterpretation of Aboriginal stories, an evocation of fishing and environmental conservation'.9 Through the exhibition of these two dolphins, Baybaru (2020) and Bid Paikai (2020), we understand the exchange that took place between Le Havre and Australia in the creation of this exhibition, and thus the "intimacy of the link" between these two distant countries, as evoked in the title of the exhibition. The proximity between the two countries is reaffirmed throughout the exhibition through the juxtaposition of the Museum's collections and contemporary artworks. 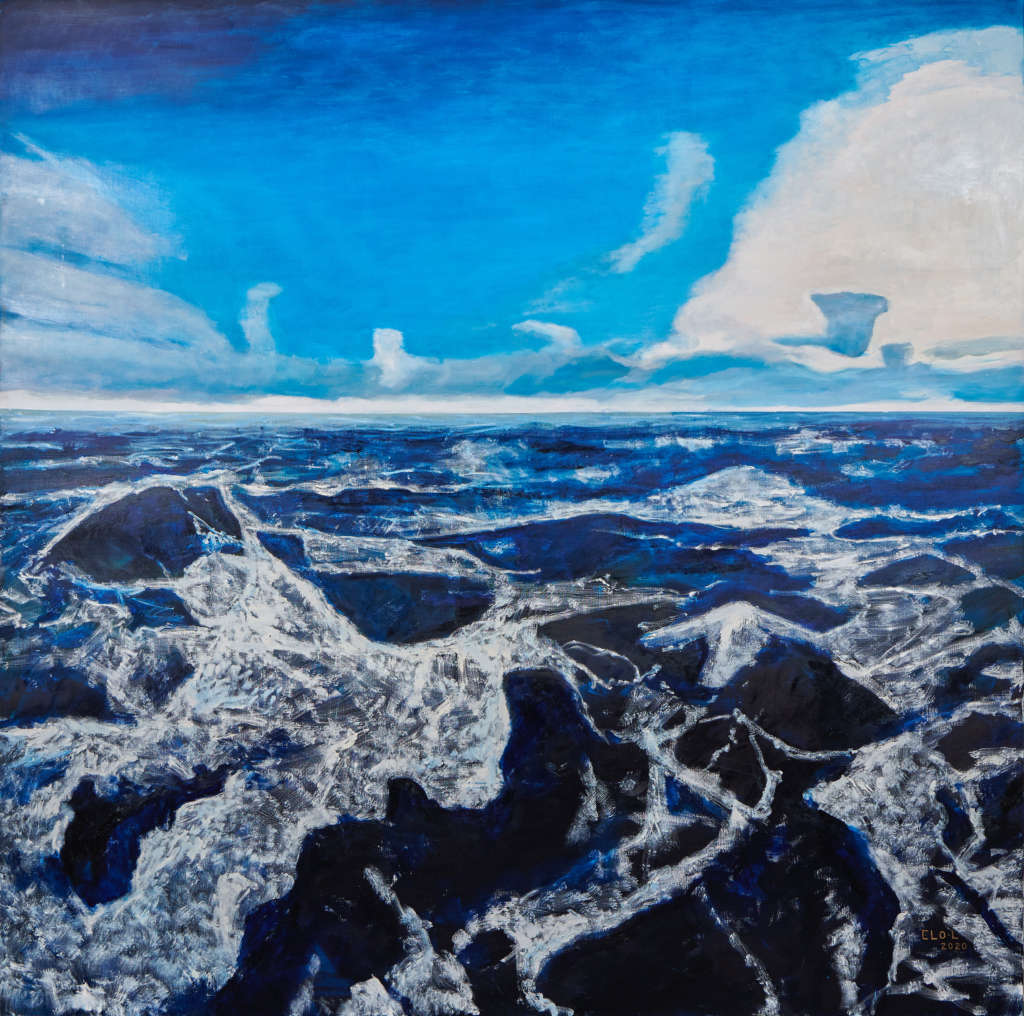 Indeed, on the first floor, where the exhibition begins, there are many drawings from the expedition, but there are also works by the Australian artist Emmelene Landon. After moving to France at the age of 9, she travelled the world on numerous occasions, painting and writing. Representative of the artist's travels, two oil on canvas works are exhibited (Pacific Ocean, 2020 and Red Earth and Pantu: Salt Lake, 2020) alongside Lesueur's drawings, creating a dialogue between the 19th and 21st centuries. 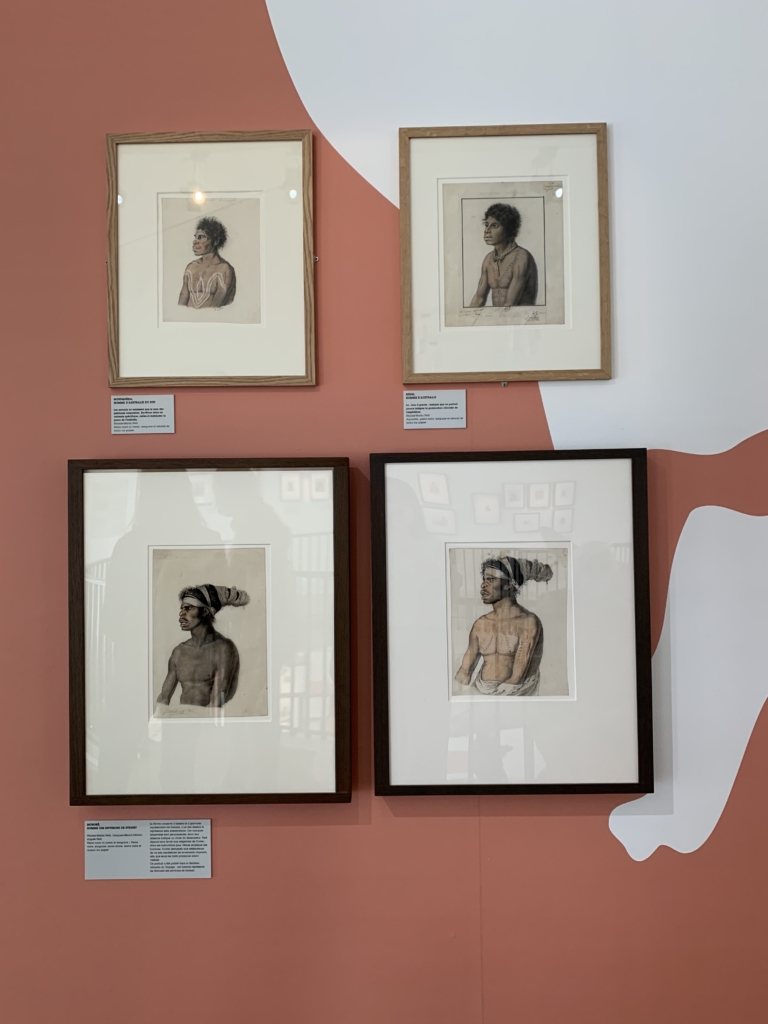 This dialogue does not end here in the exhibition but continues in the following rooms which highlight Aboriginal men and women and their culture through the prism of the drawings made during the expedition. While Nicolas-Martin Petit's drawings of Aboriginal men and women represent what was considered the Aboriginal "type", the exhibition highlights specific communities such as the Ngarrindjeri (South Australia) and Lutruwita (Tasmania).

The Kondoli Whale, a basketry work made for the Le Havre Museum hangs in the centre of the room. Created by Aunty Ellen Trevorrow in collaboration with friends and family members, the Kondoli Whale "carries with it the traditional stories of the Ngarrindjeri people, their culture, their identity, as well as the process of weaving their baskets." 11 The presence of not only the whale but also other Ngarrindjeri works in the exhibition "thus conveys the authenticity of [this] culture" today. 12 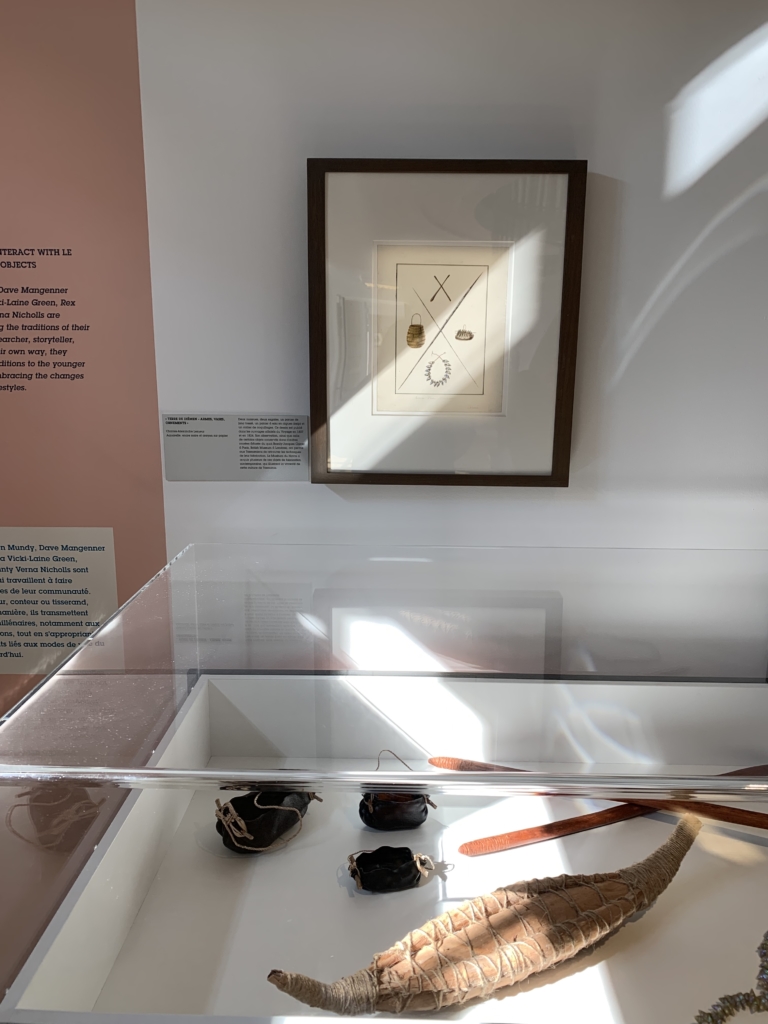 Finally, it is the culture of Lutruwita (Tasmania) that is highlighted in the exhibition. A set of contemporary objects are placed under glass in front of the ethnographic drawing Terre de Diémen - Armes, vases, ornements by Charles Alexandre Lesueur (1807). The juxtaposition of the objects and the drawing are a way of showing the cultural continuity that has been present in Australia for hundreds, if not thousands of years. The drawing shows us a basket, a necklace, a seaweed basket and clapsticks which are displayed in the vitrine in their contemporary form (commissioned especially for the exhibition by the museum), which are very similar to the form documented by Lesueur in the early 19th century. These objects are also featured in the work Interrupted (the Garden), by Julie Gough (2020).

"Made on the site of the garden planted by Felix Lahaye during the d'Entrecasteaux expedition in 1792, [Interrupted (the Garden)], exposes the contradiction between this "intrusive gift" of seeds by European explorers and their promise of sustainable returns and exchanges. Here [Julie Gough] evokes the possibility of a different future that ensures the "cultural survival of communities in the face of the traces of colonization”.”13 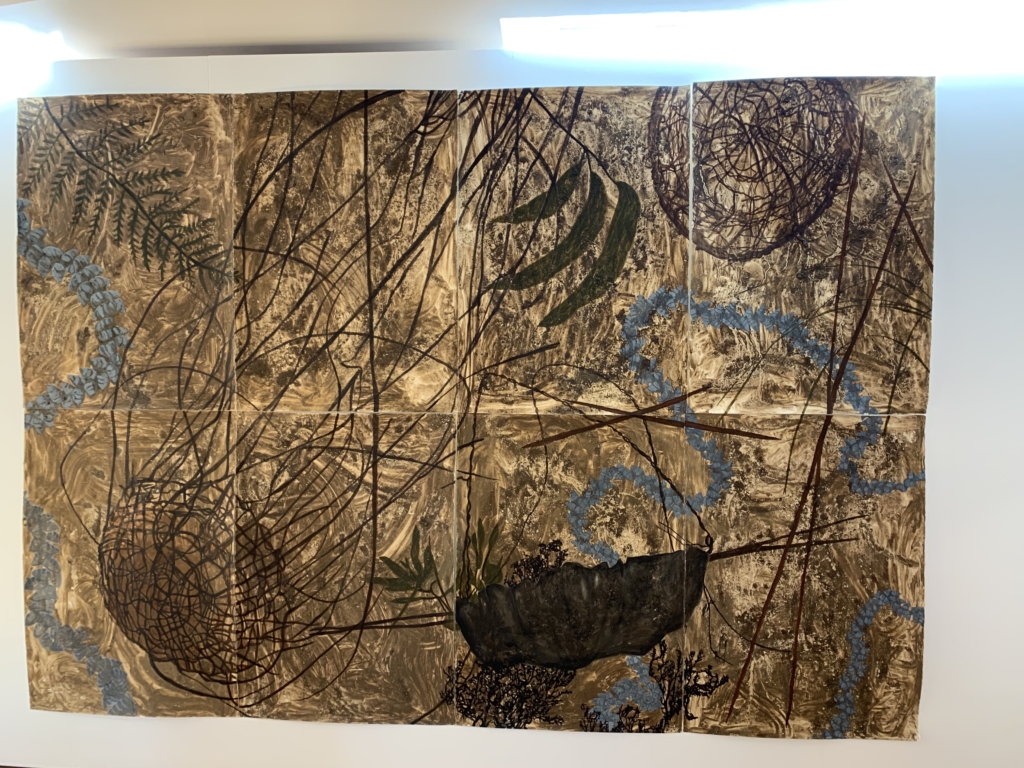 Julie Gough's work and all the other contemporary works acquired by the Museum are a means of strengthening the connections and relations between France and Australia, but above all of making the collections of objects and drawings known outside the walls of the Museum of Natural History in Le Havre as far as the Indigenous communities of Australia that have participated in the exhibition project.

The exhibition Australia / Le Havre - The Intimacy of a Link (1801-2021)is part of the Escale Australienne in Le Havre, which presents three exhibitions of Aboriginal art. The exhibition at the Museum is open until 7 November.  Just two hours by train from Paris, arm yourself with your magnifying glass and discover Charles-Alexandre Lesueur's drawings, Ghostnets and plenty more works on display at the Museum in Le Havre.

Cover picture: advertising image of the exhibition used on the following website: https://76.agendaculturel.fr/exposition/le-havre/exposition-australie-le-havre-l-intimite-d-un-lien.html

3 Find here explanations from a conservator about how the drawings from the Muséum of Le Havre were restored.