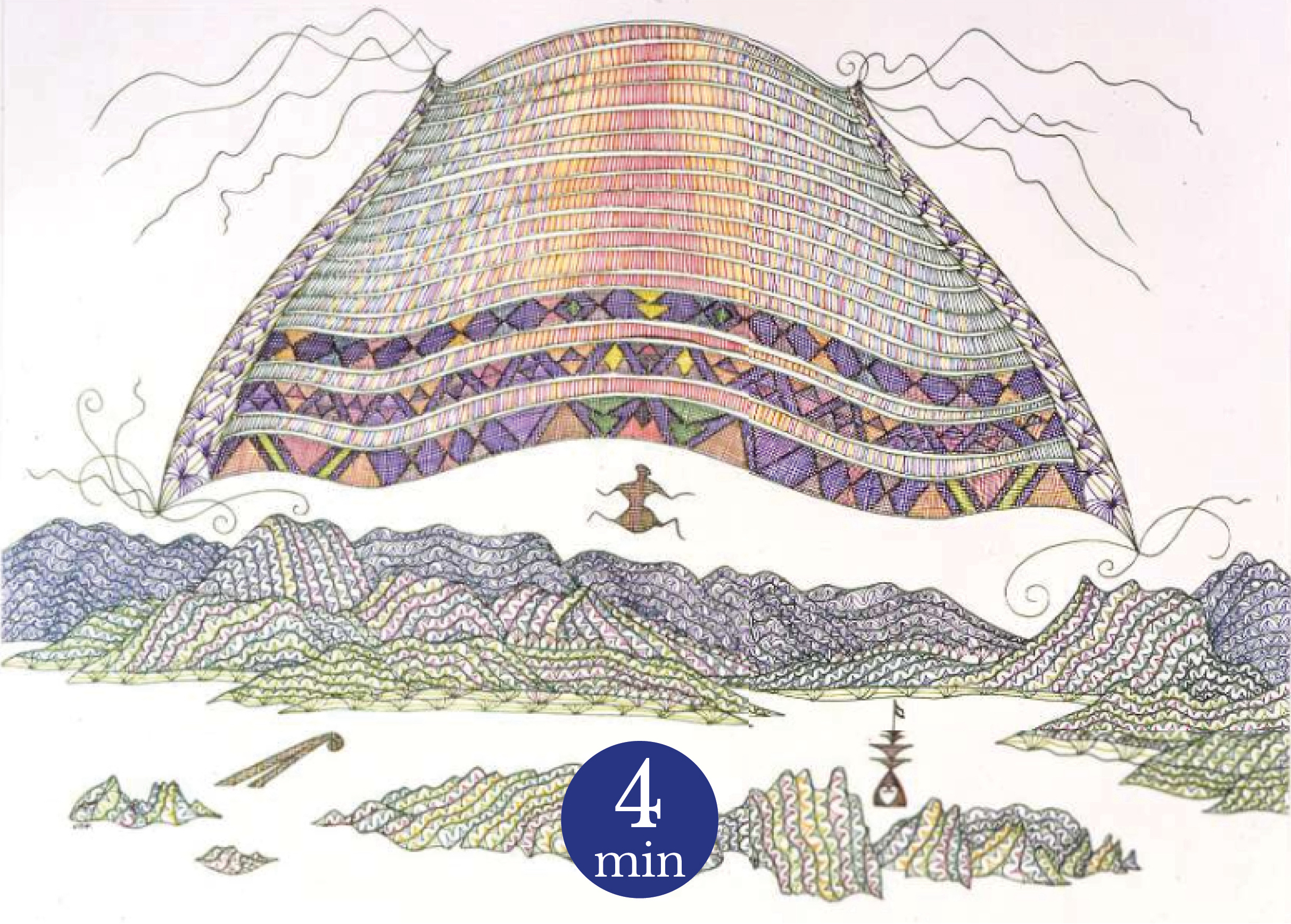 A harmony of coloured strokes, interlacing lines that form mountainous landscapes, sketch stylised silhouettes, draw dugout canoes sailing on the sea, compose large 'capes' that spread out in the sky. The painted works of Maori artist John Bevan Ford are immediately recognisable. They are peaceful and harmonious, and the many symbols in them arouse curiosity. In this article, CASOAR gives you some keys to read them. 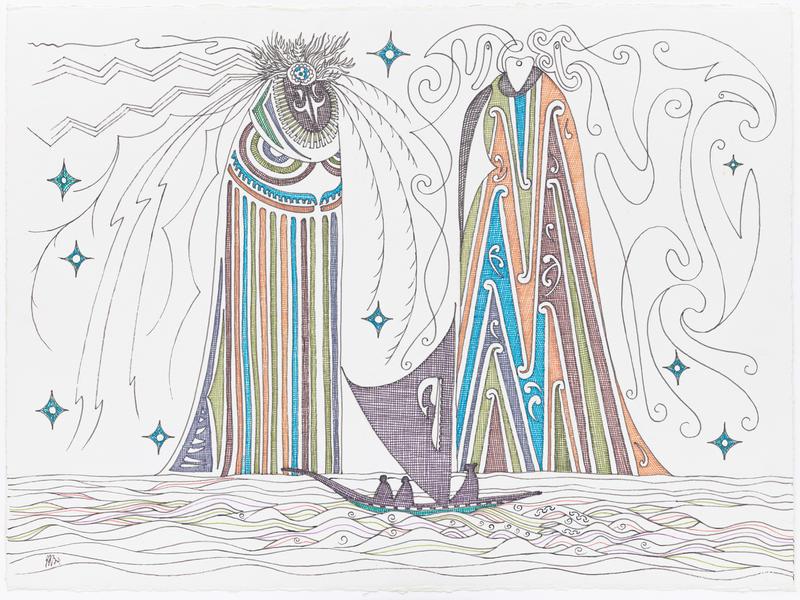 Of European and Maori heritage (Ngāti Raukawa Ki Kapiti group), John Bevan Ford was born in Christchurch in 1930, and grew up in Wellington. He died in 2005. Initially trained in Western art in Wellington and Dunedin, he later discovered and devoted himself to Maori art, training in particular with the sculptor Pine Taiapa. He made his mark with his first national exhibitions in the mid-1960s, and soon gained international recognition with exhibitions in Europe, the United States, Canada and China. Although an excellent sculptor, he is best known for his ink drawings.

John Bevan Ford is a member of the first generation of artists in the national Contemporary Maori Art Movement collective formed in the 1960s and later renamed the Nga Puna Waihanga New Zealand Maori Artists and Writers Society. This collective brought together artists of Maori heritage, including writers, painters, sculptors, weavers, film makers and performers. Through its annual meetings and events, the collective has been a dynamic forum for experimentation, debate, knowledge sharing and promotion of Maori arts.1

Widely committed to the recognition of Maori identity and arts, John Bevan Ford was one of the leading figures in Maori arts education in the 1960s. At that time, Maori culture was just beginning to appear in the school curriculum. He started out as an art teacher in schools and then became a lecturer at Massey University in Palmerston North between 1974 and 1988, before devoting himself entirely to his artistic career. 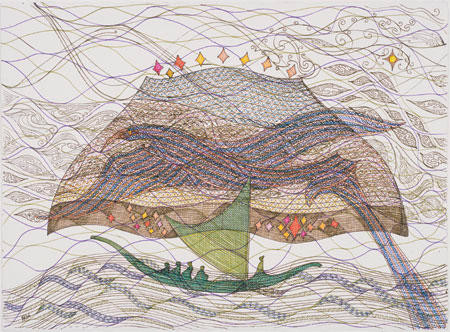 John Bevan Ford's painted works are meticulous and detailed. They invite the viewer to get closer to them to apprehend the complexity of the hatching, interlacing and squaring that compose them. The meticulous treatment of the lines is in some ways similar to the art of engraving, which the artist also mastered, and to the technique of weaving. These ink drawings are usually done on medium-sized paper and may be enhanced with watercolour or acrylic. Although Western mediums characterise these paintings, the themes are fully in keeping with the Maori tradition.

John Bevan Ford's works do indeed show - and give the impression of - a Maori world. Most of them are based around a mountainous landscape, the ocean and a 'cape' that seems to float in the sky. The landscapes depicted are reminiscent of Aotearoa/New Zealand and sometimes take on the typology of a real place. The sea and navigation, strongly anchored in the Maori conceptions of the world, occupy a central place and refer to cosmological narratives, to the first settlement of the archipelago, to the various migrations and to the Polynesian way of life. Mythological figures such as Maui, the demigod at the heart of the archipelago's creation stories, are also found here.

In these painted works, one motif is highly intriguing: the large 'capes' that stretch across the sky. Used metaphorically, they partly condense the artist's thoughts. 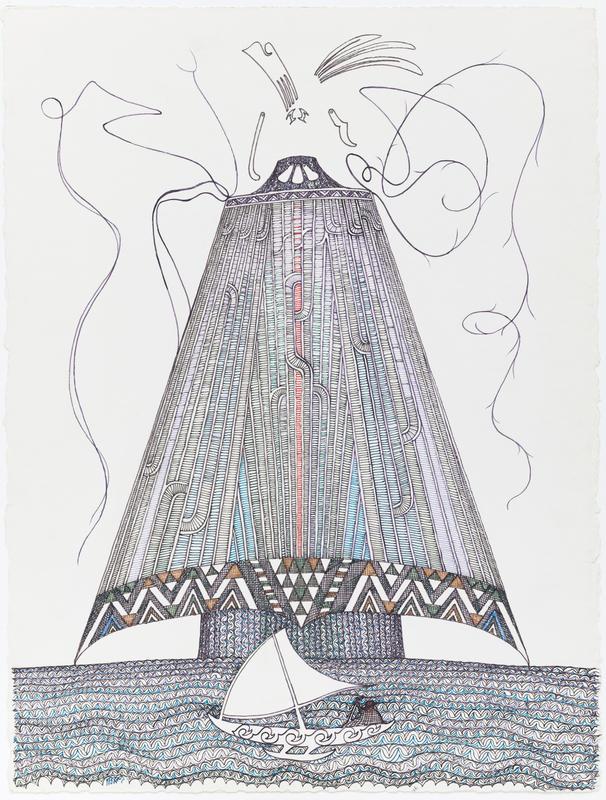 Kakahu is the generic Maori term for these cloaks. In John Bevan Ford's work, these cloaks occupy a central position. They sometimes extend over almost the entire surface, which shows the symbolic importance that the artist attaches to them! They are treated in a multitude of variations, even metamorphosing into a bird.

This type of woven cloak is characteristic of the Maori culture. The oceanic climate of Aotearoa/New Zealand did not permit the establishment of the paper mulberry tree used in the rest of Polynesia to make tapa, a beaten bark cloth used for clothing, among other things.2 This sometimes harsh and humid climate necessitated the use of new techniques to make suitable clothing. Kakahu are made by specialists, usually women, using the finger weaving technique - i.e. without a loom - from harakeke and wharariki, two endemic plants misnamed New Zealand flax by Westerners.3 Making kakahu requires great skill as well as knowledge of techniques and rituals that are passed down from generation to generation. It is considered sacred and is surrounded by tapu restrictions, including dietary and sexual restrictions.4 The meticulous way in which John Bevan Ford draws the interlacing, chevrons or grids that make up the weave of his kakahu directly echoes this weaving technique.

Kakahu are taonga, cultural and religious treasures handed down from generation to generation. They have a very strong identity value. They are prestigious garments and symbols of power, worn by people of high rank or offered during important exchanges. Kakahu are charged with mana - the energy or potential for action linked to prestige that comes from the ancestral world and circulates between beings, things and places. The kakahu incorporate the mana of their weaver, their successive wearers as well as their ancestors.5 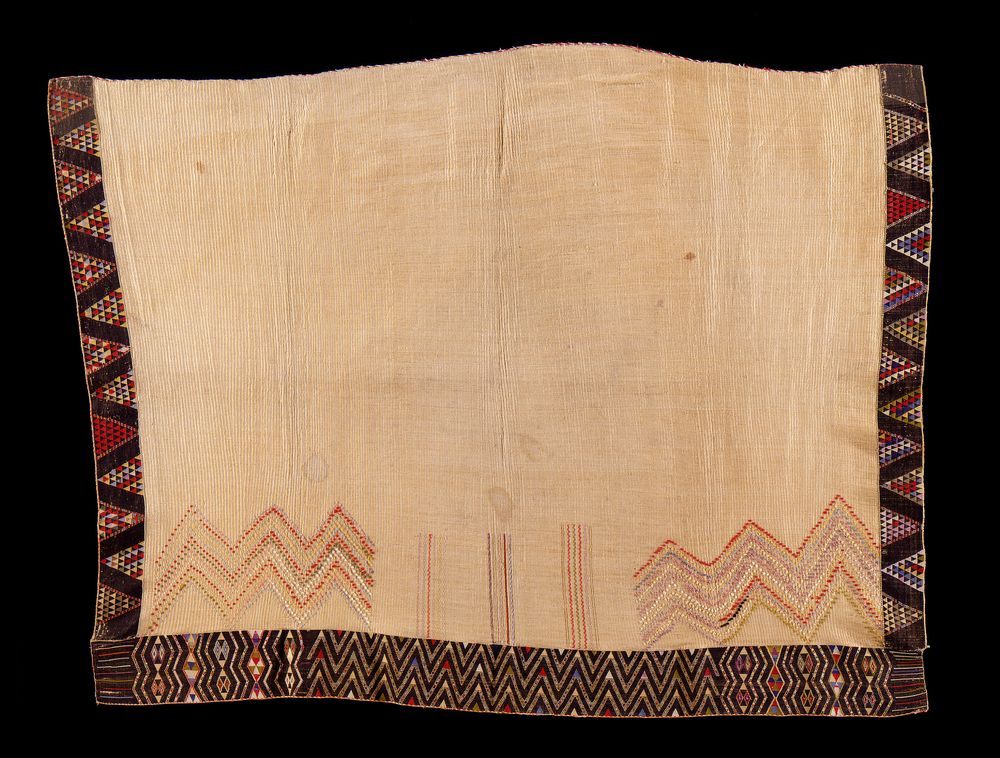 In the works of John Bevan Ford, these cloaks thus help to symbolise the presence of the ancestors and their mana. They evoke protection, against the cold and the rain - the utilitarian aspect of the cloak - but above all ancestral protection.6 On most of these cloaks, there are taniko, geometrical borders that refer to genealogy. 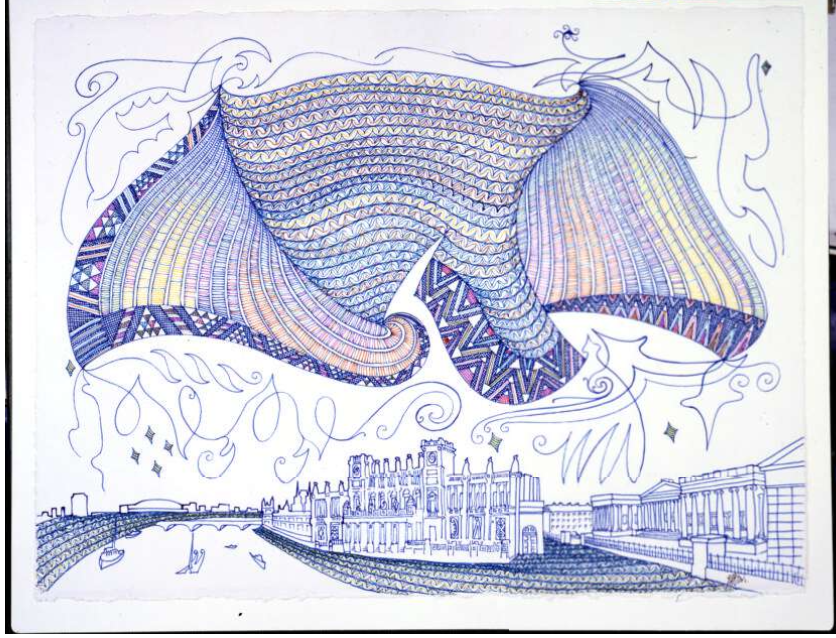 John Bevan Ford's works are highly symbolic and timeless. The physical and invisible worlds merge. The artist, through the recurrent representation of the kakahu, insists on the continuity and vitality of Maori culture:

Father Sky and Mother Earth refer to the cosmogonic myth in which Rangi - Sky - and Papa - Earth - come together and give birth to the main Maori deities, who separate them from their embrace to allow light and breath to enter the world. The notion of connection is a major question in John Bevan Ford's career. Connection between Heaven and Earth, between the visible and invisible world, between generations, but also between cultures. In 1991, John Bevan Ford completed an artistic residency at the British Museum during which he continued to explore cultural connections, particularly with British people, whose history is marked by the colonisation of Aotearoa/New Zealand. Through his work, the artist was keen to arouse the viewer's curiosity and to initiate a questioning or dialogue about Maori thought.8 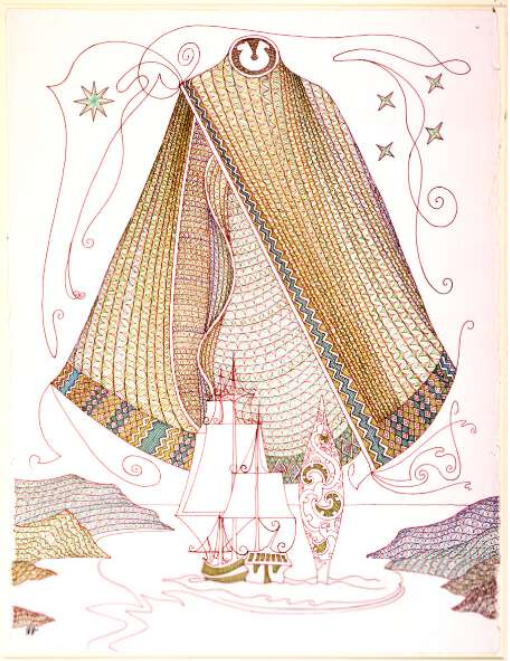 John Bevan Ford is a leading figure in the first generation of contemporary Maori artists, and is deeply involved in the teaching and promotion of Maori arts. In an effort to build bridges between cultures, John Bevan Ford has travelled and exhibited extensively around the world. Many of his works can now be seen in Aotearoa/New Zealand and internationally in public collections and galleries. A prolific painter with a rich and symbolic visual world inspired by weaving and printmaking techniques, John Bevan Ford transports us into a Maori vision of the world. The kakahu cloaks, Maori cultural treasures, fill the space and make the mana of the Maori and their territory and the protection of the ancestors almost tangible. One never tires of the multiplicity of forms and themes treated by John Bevan Ford. It is now up to you, with these reading keys, to discover them and make connections!

2 To learn more about tapa in Polynesia, it's over here!

3 Harake (Phormium tenax) and wharariki (Phormium cookianum) are members of the Hemerocallidaceae family. Their fibres are widely used in Aotearoa/New Zealand for clothing and ropes. They have been identified since the first settlement of the archipelago. See: SCHEELE, S. “Harakeke and Wharariki”, Maanakl Whenua Landcare Research.