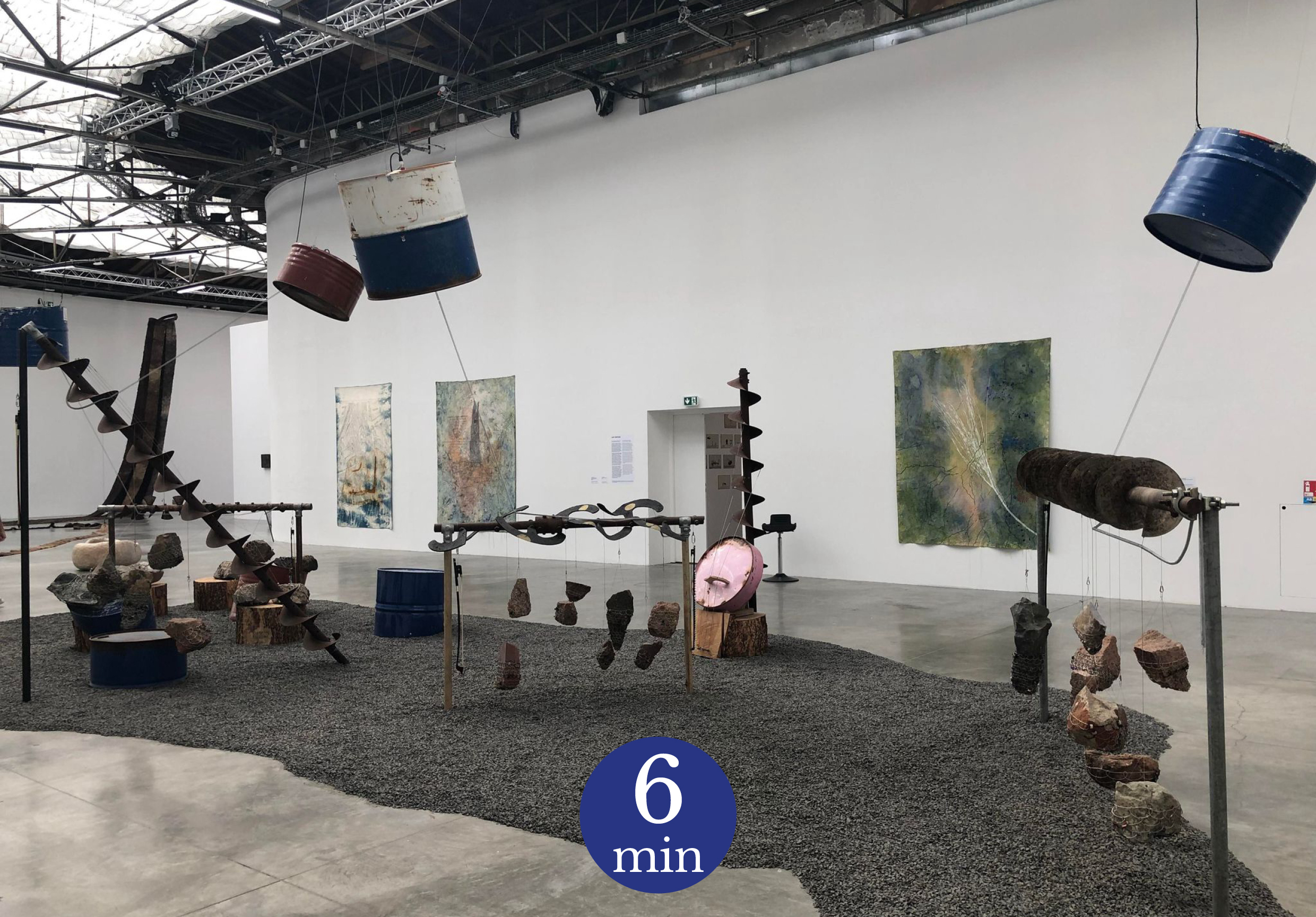 "Reclaiming the Earth is an awareness as much as a rallying call".1 From the very first sentence of its introductory text and its online presentation on the Palais de Tokyo website, the exhibition Reclaiming the Earth, on view from 15 April to 4 September 2022, displayed a promising ambition. Daria de Beauvais, curator of the exhibition at the Palais de Tokyo, has joined forces with two prominent scientific advisors to organise it. The first is Ariel Salleh, a researcher and ecofeminist activist born in Australia in 1944, whose work and commitments focus on the relationship between humans and non-humans, with a particular interest in other perspectives of thought than the dominant Euro-North American paradigms. The second one is Léuli Eshrāghi, an artist, curator, author, poet born in Samoa and of Sāmoan, Persian and Cantonese ancestry. In their expographic and artistic work, Léuli Eshrāghi interrogates the colonial consequences and the need for reparation, care and healing of indigenous cultures discredited by former colonial powers. The title of the exhibition is inspired by the book Reclaim the Earth: Women Speak Out for Life on Earth, edited by Leonie Caldecott and Stephanie Leland in 1983.2 This is the first collection of ecofeminist texts, a current of thought that contrasts women's domination with men's domination of the earth. The Reclaiming movement was born in 1979 in California, under the aegis of Starhawk, an author and ecofeminist activist. It is both a neo-pagan spiritual movement and a political movement. In this sense, Reclaim "means both to rehabilitate and reappropriate something destroyed, devalued, and to modify it as well as to be modified by this reappropriation".3

The exhibition Reclaiming the Earth is partly inspired by this current and envisages presenting a form of ecology that goes beyond the Euro-North American vision, through the cosmologies and ways of thinking of indigenous peoples4 and through references to decolonial anthropology. To quote Léuli Eshrāghi, "to proclaim loudly that we are earth, that we belong to the earth, we are earth, we are a function of the earth according to indigenous ways of thinking".5 It also aims to denounce imperialism, capitalism and colonialism and their consequences in terms of extractions and the principle of superiority of the human species. The curator and the two scientific advisors of the exhibition were particularly interested in the idea of the common and the links between humans and non-humans, in order to challenge the naturalist paradigm inherited from European thought and advocating a dichotomy between nature and culture.6 Let us quote once again Léuli Eshrāghi for whom it is necessary to "think and rethink the relationships to this planet, to everything that surrounds us by means of indigenous knowledge, because these are ways of doing, ways of thinking, ways of being in good relationships that are in a collective perspective".7 The selection made includes fourteen artists of different generations and origins, whose work responds to the current ecological emergency. An urgency that needs to be recalled more than ever as France and other countries have experienced record temperatures and bad weather in recent months. Ironically, the non-air-conditioned space at the Palais de Tokyo had to be closed during the summer due to the high temperatures in Paris.

Several Aboriginal artists from Australia are exhibited. As soon as you enter the Palais de Tokyo, you are greeted by D Harding's work, which leads you to the first room. D Harding is an artist of Bidjara, Ghungalu and Garingbal descent, born in 1982, who now lives and works in Brisbane, Queensland. D Harding updates the cultural and material practices of the Aboriginal populations: on the one hand, through the making of possum skin coats8, here made from felted wool, and, on the other hand, through rock art, transposed here on the walls of the Palais de Tokyo. The blankets are soaked in mineral pigments from Queensland; once hydrated, they are used to create the murals. 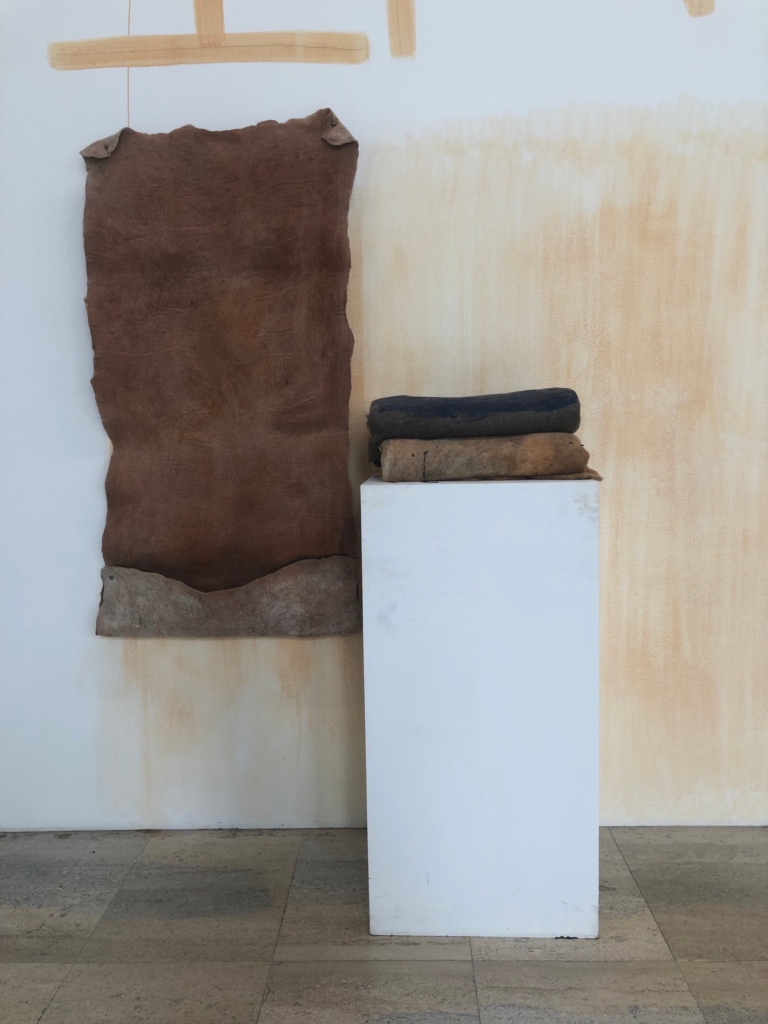 Also on display in the hall is a work by Yhonnie Scarce, an artist of Kokatha and Nukunu descent born in 1983 who lives and works in Melbourne/Naarm. The work presented is Shadow Creeper, constituted of a hundred yams made of hand-blown glass and suspended high from the ceiling. The work has echoes of the nuclear tests undertaken by the United Kingdom in South Australia between 1956 and 1963.9 These nuclear tests resulted in the crystalisation of rocks in the ground, which were transformed into glass. The choice of the shape of the yam is explained by the fact that this tuber, which grows underground, is the main food of the Aboriginal communities living in the test areas, who obviously suffered from the tests and continue to pay the consequences.

Yhonnie Scarce, Shadow Creeper, 2022. Courtesy of the artist & THIS IS NO FANTASY. Photograph by Marion Bertin.

In my opinion, the most powerful work is by Aboriginal artist Megan Cope, who also addresses issues of territory, this time through the consequences of extractivism. Born in 1982 in Brisbane, Megan Cope is of Quandamooka descent. She lives and works between Minjerribah (North Stradbroke Island) and Bundjalung Territory (Lismore, New South Wales). Untitled (Death Song) is a multi-media installation: a set of three drills from which rocks are suspended on a gravel floor. Oil barrels, placed on the ground or high up, complete the installation. A soundtrack imitating the song of the red-crowned nightjar, an endemic Australian bird species that is threatened in several regions, is added. The artist "interprets their song as a metaphor for the cry of our endangered planet, alerting us to current environmental problems and the point of no return to which we are arriving".10 Australia and its Aboriginal territories are particularly affected by mining. Mining industries are ravaging ancestral and sacred sites and the environments of all species living nearby, both human and non-human. This installation can be activated by musicians playing sculptural and more classical instruments to a score written for the exhibition; several performances have been scheduled during the exhibition. Presented under the glass roof of the Palais de Tokyo, this work is particularly resonant in the raw aesthetic of the space and apparent industrial architecture.

Presented in the main hall of the Palais de Tokyo under the glass roof, it is surrounded by works painted by Judy Watson, sometimes in collaboration. Judy Watson is a Waanyi artist, born in Mundubbera and working in Brisbane. Her work is a form of 'memory archaeology'11 which intersects with an interest in geological formation and the 'dreamtime' of Aboriginal communities. The artist uses a variety of materials of natural origin (pigments, bark, shells, earth, etc.) and industrial materials (acrylics, lacquers, etc.) which she allows to interact. The series presented here is inspired by the history of the Seine, as well as other rivers in Australia.

This space is a testimony to the dialogue between the works. For the rest of the exhibition however, while the exhibition's aim is resolutely relational, the spatial layout is different. The works seem disconnected from each other and placed side by side in the exhibition spaces. Only a few rare label texts attempt to create links and bridges between works that address common themes. According to the Palais de Tokyo's online presentation text, "the artists in Reclaiming the Earth help us to think and feel about a charged, intensified and active nature." However, many of the works presented seem disembodied of their force in the Palais' post-industrial white cube aesthetic. The exhibition also sorely lacks an effective contextualisation: the geopolitical, economic and climatic issues behind each work are only schematically explained in the accompanying labels. The latter are the only texts present, with the exception of the introductory text at the entrance to the exhibition. A mediation and reading space - already developed for the exhibition Ubuntu, a lucid dream (November 2021 to February 2022) - attempts to remedy this situation with the help of the surveying method, a learning method stemming from the anarchist movement and aiming at a collective and critical reading of texts in order to promote the appropriation of knowledge. This space, designed by the collective ·ClubMæed·, includes drawings, text extracts and short definitions around four themes: ecology, ecofeminism, relations with the living, and indigenous and postcolonial thoughts. A few books from the exhibition's bibliography are also displayed on a table surrounded by armchairs. It is regrettable, however, that this space is on the lower floor and therefore not directly connected to the exhibition. 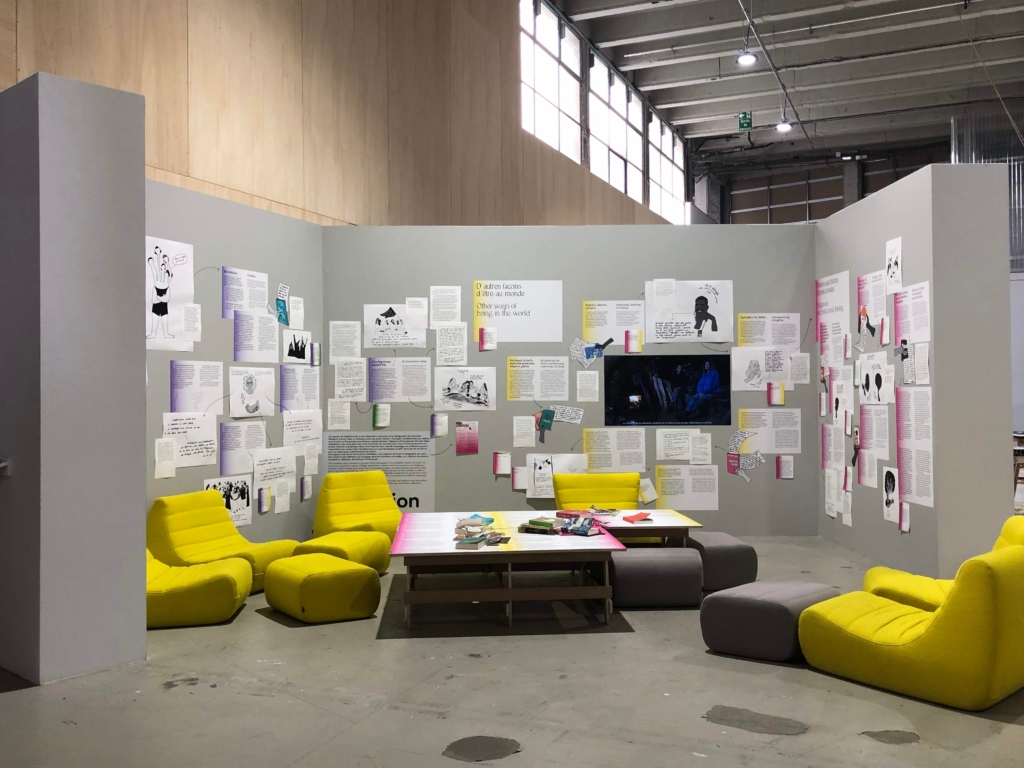 One can also regret the pitfall of texts that use the vocabulary and concepts dominant in the contemporary art world. Despite the desire to break with the naturalist paradigm, or at least to distance oneself from it, the exhibition texts use the term "nature" in abundance. These two glossary pitfalls demonstrate the difficulty of breaking out of the hegemonic Euro-North American modes of enunciation and concepts. However, the exhibition allows us to discover and see artists who are rarely exhibited in France and to give greater visibility to the ways of thinking, being and living of indigenous populations. The scientific programme, in particular the seminar series Autochtonie, hybridité, anthropophagie (II)12 co-designed by Morgan Labar and Daria de Beauvais, also contributed to this effort. While the Engie Foundation is one of the Palais de Tokyo's annual patrons, one may wonder whether the exhibition will leave a mark on the general functioning of the institution and allow for a more global rethinking of the dynamics of the art worlds.

For those who have not visited the exhibition, the Palais de Tokyo offers an online tour: https://palaisdetokyo.com/ressource/visite-de-lexposition-reclamer-la-terre/

4 "The term "indigenous" is used as a "relational political category" defined by the relationships that human groups who have been minoritised by colonisation and current regimes have with other social groups and with institutions of power." Indigenous peoples represent 5% of the world's population, spread across 90 countries and protecting over 80% of the world's biodiversity: GLOWCZEWSKI, B., 2020. « Réimaginer la terre avec les peuples autochtones ». Terrestres, March 10th, 2020. https://www.terrestres.org/2020/03/10/reimaginer-la-terre-avec-les-peuples-autochtones/, consulted on 01/09/2022.