This article was first written for the catalogue of the Bourgogne Tribal show's third edition in 2018.

"You walk towards Auteuil you want to go home on foot
To sleep among your Oceanic and Guinean fetishes
They are Christs of another shape and another creed."
Guillaume Apolinaire, « Zone », 1913.

These lines by poet Guillaume Apollinaire testify to his early interest in non-European art. The year was 1913, on the eve of the First World War, and his famous collection of poems Alcools, had just been published. Apollinaire did not know then that the West was about to change the way it looked at Pacific objects. This metamorphosis would deeply mark the history of the arts and ethnographic museums.
Nearly the whole of the Pacific was then colonised and the major part of the archipelagos was shared between France, Great Britain, the Netherlands and visited. Exploring expeditions, especially on the island of New Guinea, marked the beginning of the twentieth century. In the early 1930s, the Australian prospectors Michael Leahy and Michael Dwyer noticed that many peoples formerly unknown were living in the mountain area of the Highlands of New Guinea, a region believed to be uninhabitable. Through some of these expeditions, many objects were shipped to Western museums where they entered collections dating from the nineteenth century. At the same time, the Pacific objects began to arouse serious interest in avant-garde artists.

The word "primitivism" was used later to refer to this infatuation for non-European art in general. Inspired by Gauguin, some artists like Picasso and Matisse turned to Oceania even before the First World War. But it was mainly after the War that Pacifc objects became really popular among artists. These artists probably discovered them in museums but also in galleries, like the ones owned by Paul Guillaume, Charles Ratton or Pierre Loeb who sold both Western and non-European works. The artists collected these objects and drew inspiration from them, even if unconsciously. Some of them, like the surrealists, exhibited their works jointly with non-European objects, thereby claiming that they be put on an equal footing with their own creations.
Until then, Oceanic objects had been regarded mainly as “exotic” curiosities by the wider public and as illustrations of different evolutionary stages by ethnographic museums. In effect, these museums had an evolutionist approach based on Charles Darwin’s theories. They argued that non-Western societies belonged to previous stages of human evolution, thus explaining why the term “primitive” was used. So, at the beginning of the twentieth century, a radical shift occurred when artists and gallery owners recognised the aesthetic qualities of these objects.

Non-European objects were central to a true fashion that was not confined to the art of Oceania. Sales and exhibitions organised by collectors, artists and gallery owners followed one another. The passion was first for Polynesian objects which were praised for their “decorative” qualities and their geometric rigour. Gradually, Melanesian objects also became renowned. Wrongly considered as the fruit of a “liberated” imagination, they were compared to works belonging to certain contemporary artistic movements, notably surrealism.1 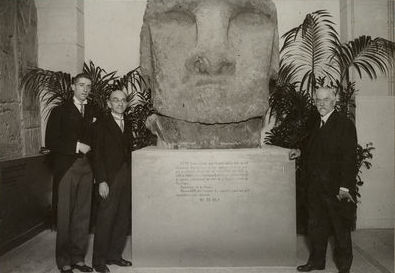 The economic crisis that hit Europe in the late twenties damaged the art market for several years. In France, this difficult period coincided with a second transformation in the way Pacific objects were looked at, this time not brought about by the artistic scene but by the musée d’ethnographie du Trocadéro. Founded at the end of the nineteenth century, this institution was deeply troubled. Ignored by the public, the museum lacked staff and funds, and its approach to objects was completely outdated. But in 1928, a shift in direction brought change to the institution. It was Paul Rivet, who held the chair of anthropology at the Muséum national d’Histoire naturelle, who took over the leadership of the drifting institution. He recruited young Georges Henri Rivière, a dynamic figure for whom the Parisian cogniscenti had no secrets. Assisted by a team who were mostly volunteers, Rivet and Rivière gave a new face to the musée d’ethnographie du Trocadéro. The reorganisation of the museum was part and parcel of Paul Rivet’s great project to professionalise a young discipline in France: ethnology.2

It was with this project in mind that in 1925, he founded the Institute of Ethnology of the University of Paris with sociologist Marcel Mauss and philosopher Lucien Lévy-Bruhl. They set out to train scholars who would study non-European peoples in their cultural environment. This project was not unrelated to the colonial enterprise since the knowledge acquired was to allow better administration of the French colonies in the long run. For Rivet, this entailed methodically collecting and rigorously documenting objects. Once they became fully integrated to the collections of the musée d’ethnographie du Trocadéro, they would become “objects as witnesses” of a specific society. For Rivet, they were a privileged means of understanding the immaterial foundations of these societies.3
From an outdated "bric-à-brac"4 , the musée d’ethnographie du Trocadéro, affectionately nicknamed the Troca’, turned itself into a modern institution with a pedagogical focus. The museum supported collecting expeditions, like the voyage of the Korrigane which sailed the Pacific between 1934 and 1936 and brought dozens of objects to the museum. When these expeditions returned, exhibitions were organised, so that it was the musée d’ethnographie du Trocadéro which ran the show and organised events around non-European objects. Georges Henri Rivière could then rally his networks to turn the museum into a social and art scene where his artist friend Joséphine Baker even came and posed.

Although the new ethnographic museum modernised its approach, it retained an attachment to theories that have all been challenged today. Paul Rivet argued that there were different human races, though he denied any hierarchy between them. He also espoused the ideas of diffusionism5 which argued that the great inventions of humanity were supposed to have spread progressively throughout the world from a single point of origin.6 However, the notion of ‘objects as witnesses’ was a long lasting one in ethnology and it influenced ethnographic museums a great deal. With both the reorganisation of the Troca’ and the passion for primitivism, the inter-war period in France saw a double metamorphosis in the way non-European objects were considered.

The word “primitivism” is very controversial. According to the CNRTL, the word, in artistic terms, is related to “what is at its beginning; [what] precedes maturity, maturation in a style, a technique, a manner”. 7In view of such a definition, one is likely to have reservations when it comes to using it to define Oceanic arts. A difference should be made between “primitive” and “primitivism”, the latter referring to “an aspect of the history of modern art and not of tribal art”.8 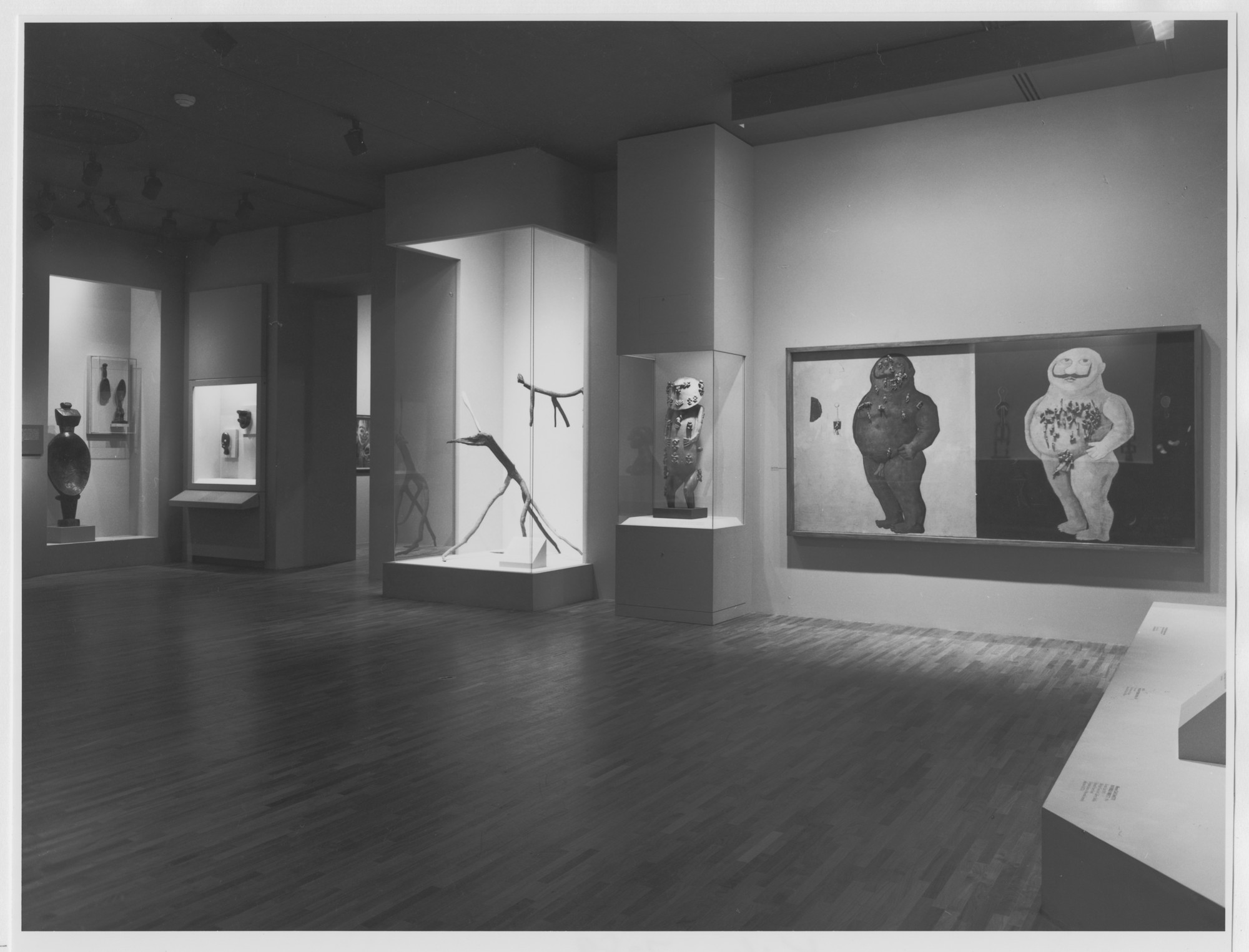 Installation view of the exhibition, « ‘Primitivism’ in 20th Century Art: Affinity of the Tribal and the Modern ». September 19, 1984–January 15, 1985. Photographic Archive. The Museum of Modern Art Archives, New York. IN1382.40. Photograph by Katherine Keller.

The first major museum collections of ethnographic objects emerged in the third quarter of the nineteenth century. These objects were first mixed with prehistoric objects and with those described by Robert Goldwater as “unclassifiable”.9 Such museography revealed the weight of evolutionist theories which associated non-European objects with a production of a primordial era. Objects were classified by typologies and some of them were then highlighted for their aesthetic qualities, as the choices made by the Musée de l’Homme in the years 1937-1939 showed. It is within the Musée d’Ethnographie du Trocadéro, the Musée de l’Homme’s predecessor, that Picasso discovered non-European art at the end of the nineteenth century. Museums were one of the privileged places where modern artists met so-called “primitive” arts. These could also be seen at the premises of art dealers and antique fairs. Artists often bought objects, the first and better-known being the Fang mask from Gabon who had belonged to the Fauves. However, they first acquired objects because of their formal qualities and because they resonated with their own works, not because of what they meant or were used for, or because of their vernacular significance. So, the objects inhabiting their workshops and the avant-garde artists’ imagination constituted a repertoire of forms and reflection. In the wake of Gauguin and his flight to the South seas, early twentieth-century artists used these resources when they looked for ideas and new forms in order to escape the constraints of the Salons and the bourgeois mores. They stood against the virtuosity valorised by the Académie and turned to a “simple and naive”10 art, partly represented by non-European works which they valued for their expressivity and evocative power.

However, William Rubin invites us to consider the relations between non-European works and those of modern artists in terms of affinities more than influences.11 The artists’ works echo the objects, but these objects are hardly formal copies and influences are sometimes difficult to identify. The Nose, created by Alberto Giacometti in 1948 illustrates this somewhat allusive play with references. According to Rubin12, it recalled the Baining Vung Vung mask from New Britain that the sculptor had seen at the musée de Bâle. The artist interpreted the mask’s resonating tube near the mouth as a long nose, neglecting the ethnographic reality of the object. He used this formal solution probably because this was what caught his attention. From a different perspective, Calder directly alludes to an Imunu from the Gulf of Papua New Guinea in his work Apple Monster, created in 1938. He got a branch of an apple-tree and painted it. What interested him in theImunu was mostly its form which reminded him of the spontaneity of a found object. Thanks to his connection with the gallery owner Pierre Loeb, he was aware of the ritual significance of the object in its vernacular context. His art of appropriating Oceanic art was therefore different from Giacometti’s, which shows that there were different approaches to non-European art by avant-garde artists.

“The ambition of primitivism in modern art is primarily to endow what is familiar with a quality of strangeness […] in order to challenge the received wisdom of Western culture”. The interest of avant-garde art was crucial in the evolution13 of the approach of non-European art. By reusing its forms in their own works, they introduced Western audiences to a new language and, in so doing, played a major role in the study, and then in the reassessment of these works as art in their own right. This was the occasion to reveal all the complexity of these objects, beyond their mere forms.

Cover picture: Installation view of the exhibition, « ‘Primitivism’ in 20th Century Art: Affinity of the Tribal and the Modern ». September 19, 1984–January 15, 1985. Photographic Archive. The Museum of Modern Art Archives, New York. IN1382.41. Photograph by Katherine Keller.