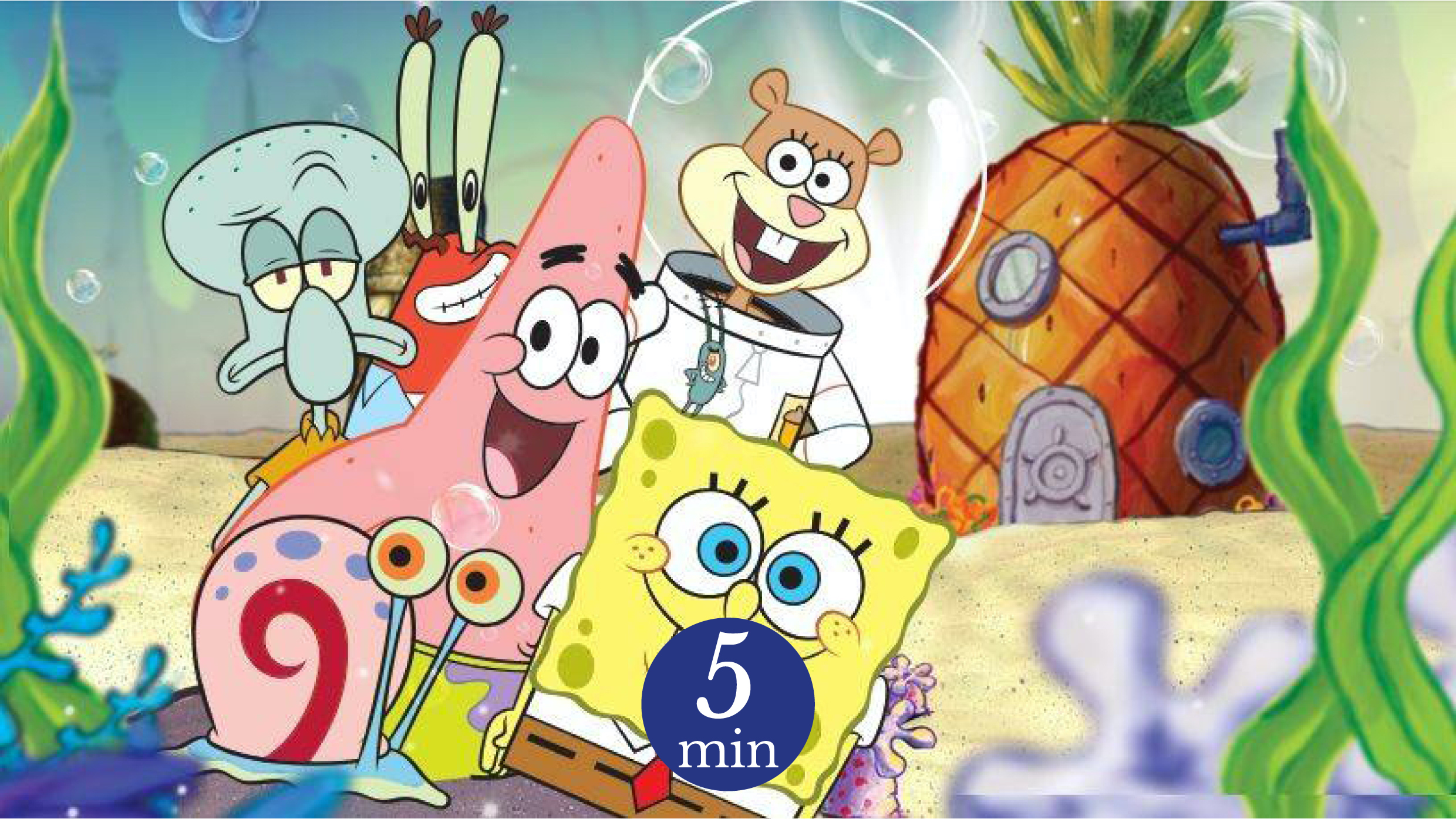 I'm sure you've heard of the strange character SpongeBob SquarePants. A yellow sponge with big blue goofy eyes, two little teeth sticking out and a weird outfit - at least for a sponge - consisting of brown shorts, a white shirt and a red tie.
Come on, no one will repeat it, we all know that when you were a kid, you already watched SpongeBob SquarePants, or you even saw it without knowing it, because your child or grandchild was glued to it. 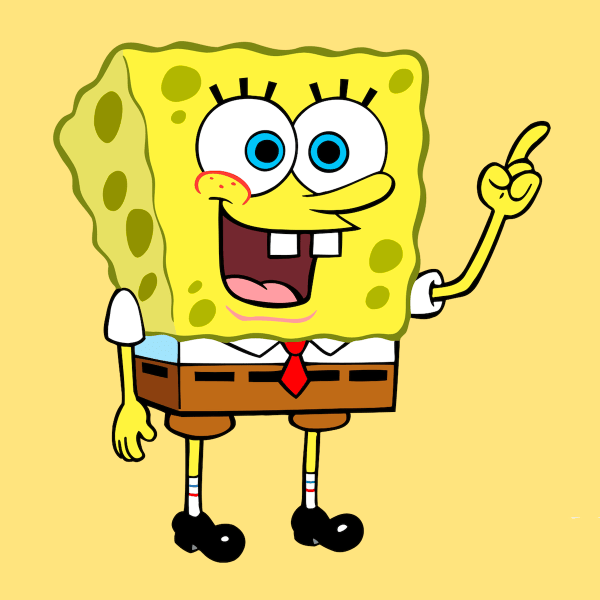 Stephen Hillenburg (1961-2018), originally a professor of marine biology, was an American cartoonist, screenwriter and director. He is the father of SpongeBob SquarePants, first broadcasted in 1999 on the Nickelodeon channel, whose programmes are mainly dedicated to children and teenagers. The cartoon, which tells the story of SpongeBob's adventures in the town of Bikini Bottom in short episodes, quickly became one of the biggest icons of pop culture. It is still broadcasted in over 150 countries. Two films have been made from the series, as well as a musical, which ran between 2017 and 2018 in the United States.1 While the hit cartoon has brought smiles and laughter to many viewers, it is problematic in many ways. 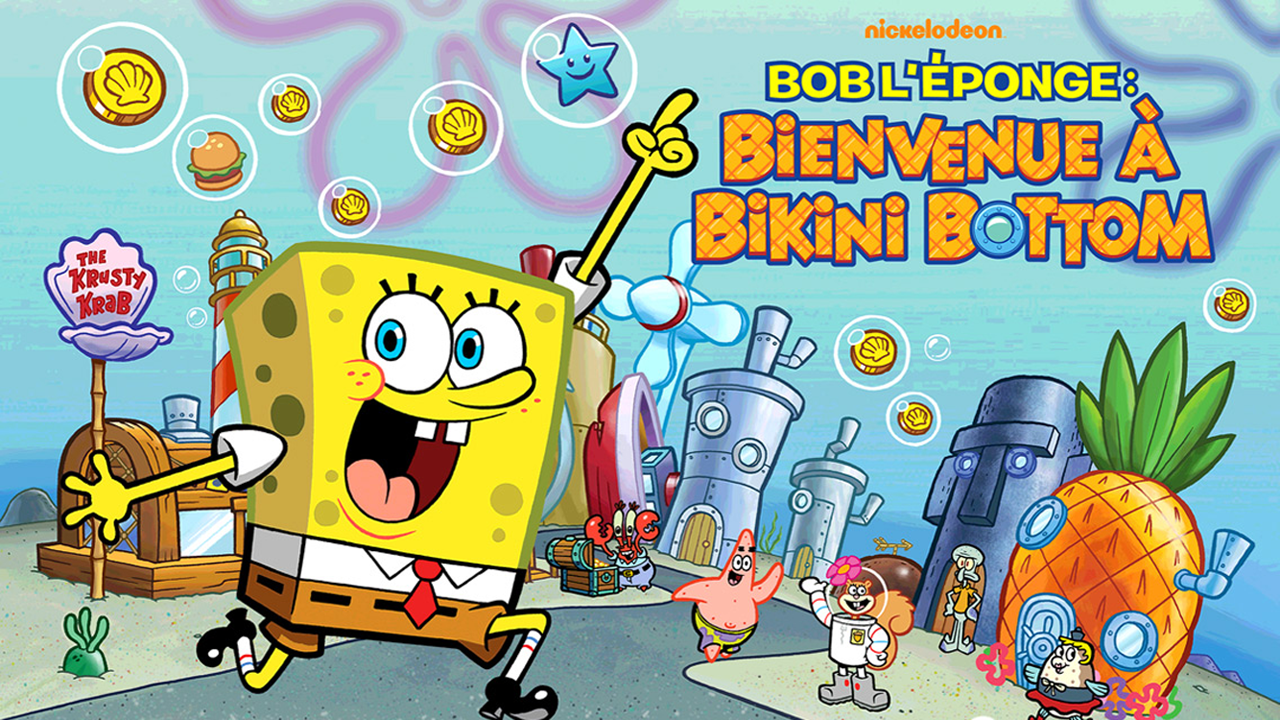 Image for a game based on the SpongeBob SquarePants cartoon © Nickelodeon
In the background, you can see the different architectures and characters of Bikini Bottom

- Bikini Bottom. Doesn't that name ring a bell?
- The bikini!
- Yes, that two-piece swimming costume, which shows the belly and the navel, invented by the Frenchman Louis Réard in the 1940s. Well, that brings us closer to our subject. Réard called his swimming costume a "bikini", after the atoll of the same name in the Marshall Islands of Micronesia. Bikini (Pikinni) comes from the Marshallese term pikinni, which refers to the surface of the coconut. A few days before the launch of what was to become a fashion hit, a nuclear explosion took place on Bikini, as part of the American Cold War tests (we've already touched on this subject by discussing the Enewetak Atoll here, and had a quick look at the history of these tests here). Could this be a form of homage? Or did Réard want his invention to be just as explosive as this nuclear test? For Holly M. Barker, it may also be a reference to the fission of the atom, which produces nuclear energy.2
- Oh yes, you don't think about that at all when you buy a bikini! It's more an advertising image that comes to mind, that of a model, always white, tall and with a very skinny body.3 But then, Bikini Bottom? Is it because SpongeBob lives in the lagoon of the atoll that was used for nuclear testing?
- Exactly. 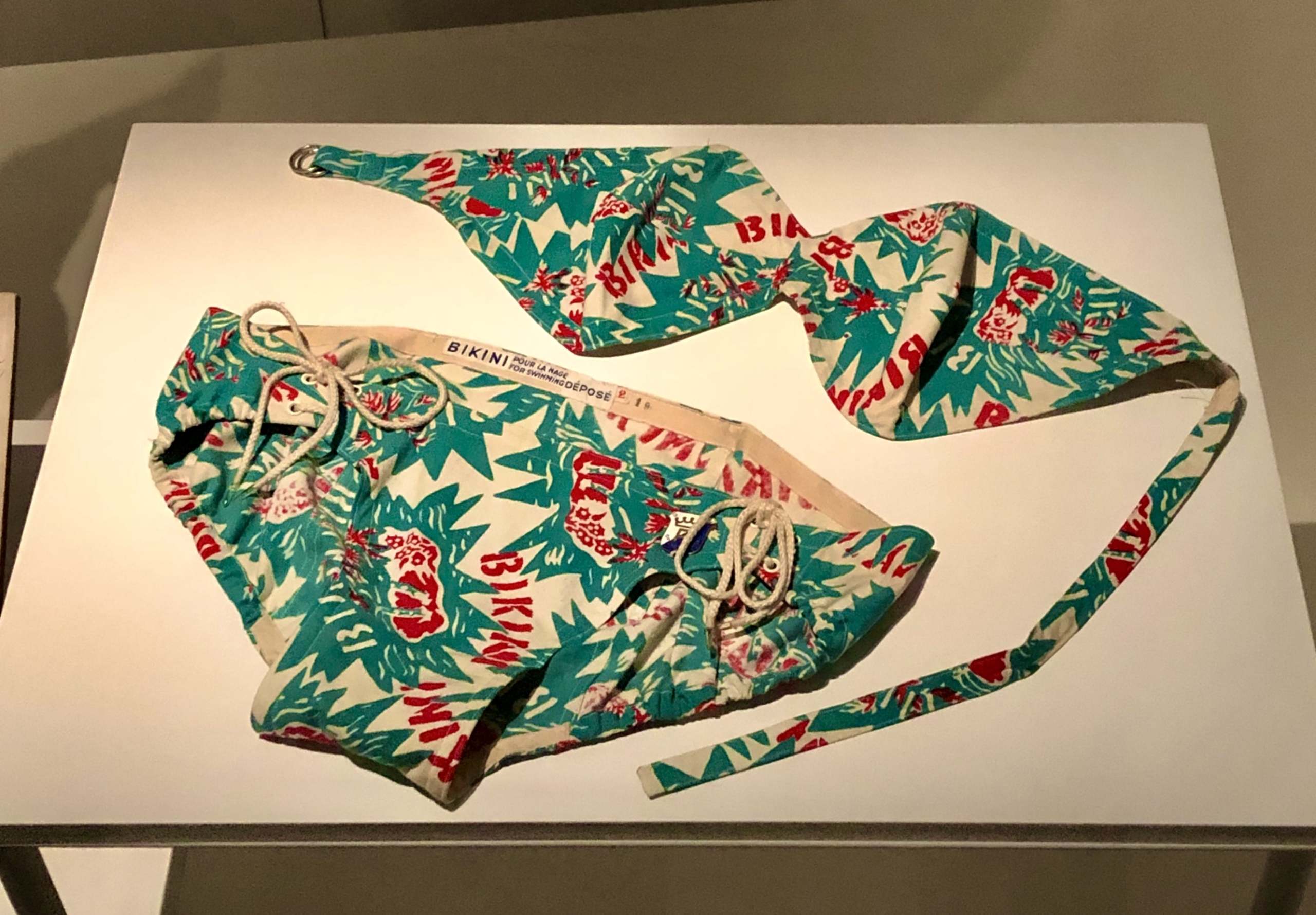 Before the Americans decided to take up residence on Bikini Atoll (and Enewetak) to conduct their nuclear experiments, the area was obviously inhabited. The islanders were simply relocated to Rongelap Atoll, where there were already people. 67 nuclear tests were conducted on Bikini, 'the equivalent of 1.6 bombs the size of those dropped on Hiroshima, every day for 12 years'.4 These contributed to the pollution, damage and even destruction of part of the landmass and the seabed. Ships and other structures brought by the Americans were sunk and are still in the ocean today.
Colonisation, as we all know, is a time of immense violence and injustice. Here, the lands of the Bikinians have been taken, destroyed, polluted. In fact, it is so polluted that the inhabitants can no longer return to live on their atoll. So why is this cartoon, featuring a living sponge, accompanied by his friend Patrick, the pink starfish, a venal crab and a nasty octopus, more than dubious? It undoubtedly helps to erase the memory of this atoll as it was before the arrival of the Americans, but above all, to conceal the violence that took place there. In this way, it "maintains American military hegemony"5 over the atoll and, more broadly, over the archipelago.6 The real story of Bikini is no laughing matter, and SpongeBob SquarePants tends to erase the reality by keeping its viewers in the dark, which helps perpetuate the violence generated on the Bikinians and their original home, made up of both land and sea.

Bikini Bottom was conceived as a city that blends all the clichés that Westerners have about the Pacific: pineapple houses, moai, tiki and Hawaiian shirts are everywhere! This Tiki Pop atmosphere (which Margot Kreidl mentioned here) continues to convey all the clichés linked to Oceania, reducing its inhabitants to what Westerners want them to be: exotic, i.e. both fascinating and disturbing, according to Claude Lévi-Strauss' definition of this term. In this city, the inhabitants can also enjoy a place called Goo Lagoon.7 Could this be a reference to the waste produced by nuclear testing? In any case, it is reminiscent of the activities of the American soldiers who, during their mission on Bikini, enjoyed the beaches and the lagoon.
Bikini Bottom is under the sea, in the Bikini lagoon, and not on land, as if it did not exist. Yet while the sea is important in Micronesian, and wider Oceanic, cosmologies, the attachment to the land is also considerable. Having occupied the land of Bikini, the Americans continue to occupy the place, and this time it is more specifically the lagoon. This is emphasised by the words of the credits, during which a pirate invites the children to go "to SpongeBob's kingdom"8, under the sea. As a result, viewers are likely to equate Bikini with not Marshallese, but American territory, further excluding Bikinians, already in exile due to nuclear testing and their legacy, on Kili, Ejit or Majuro (Marshall Islands). 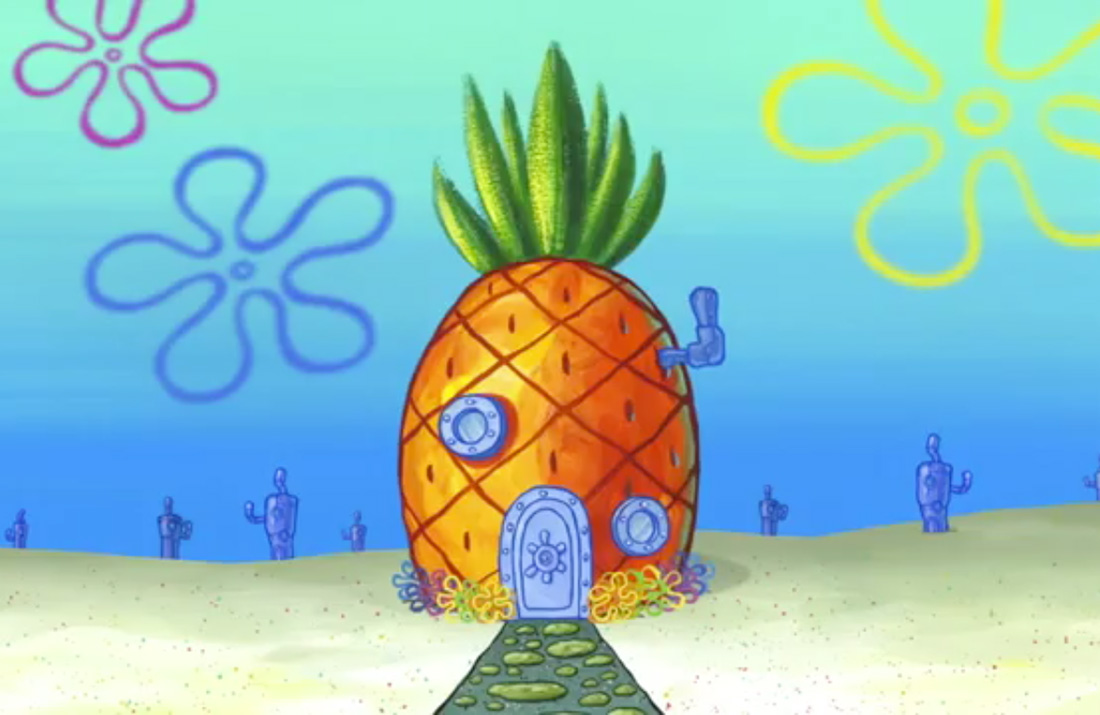 Finally, there are several theories that attempt to explain the weirdness of the SpongeBob SquarePants characters. One of them postulates that their strangeness is the result of American nuclear testing: they are all mutants. SpongeBob's squirrel Sandy, from Texas, wears a suit similar to those used by scientists who work with radioactive materials. On her chest, a symbol probably parodying the nuclear pictogram has even been added.9 Speaking of Sandy, she is the only female character in the series!10 SpongeBob SquarePants is described by Jerry Beck as "A guy who might get excited about a towel, but wouldn't care if there was an explosion outside"11 ... This laughable quirk is contrasted with the way the Bikinis are portrayed in the show. They are simply non-existent, as if they had never occupied the land and lagoon. Nevertheless, Holly M. Barker notes that, following an episode in which SpongeBob finds cave paintings, members of a fan page for the series concluded that they might be paintings by the "primitive and [now] extinct"12 Marshall people. 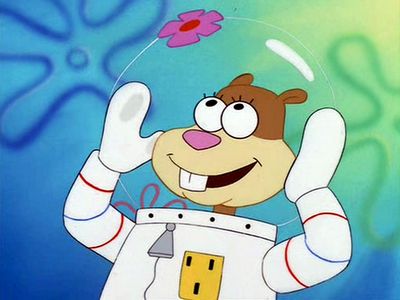 Sandy the squirrel, one of the SpongeBob SquarePants characters © Nickelodeon

The bikini, the swimming costume now widely worn around the globe, was the first element that led to the dissociation between the place and the violence that occurred on the atoll of the same name. The SpongeBob SquarePants cartoon is just as much a part of this. Godzilla, the monster created by Tomoyuki Tanaka (1954) whose story is told in several films, was born in the Marshall Islands because of the nuclear tests, whose horror he embodies. Like nuclear bombs, it destroys cities and kills their inhabitants. While he can be interpreted as a Japanese attempt to denounce American nuclear power, some see him simply as a monstrous figure created for entertainment. In any case, these creations, like the SpongeBob SquarePants cartoon, help to make the true story of Bikini and the Bikinians invisible and largely unnoticed.

3 Holly M. Barker makes a very interesting analysis of the invisibilisation of Marshallese women's bodies through the image of the bikini, which rather echoes the Western standard of beauty. This is the complete opposite of the reality of Marshallese women, who are usually dressed in long skirts and T-shirts covering their shoulders. Their bodies are sometimes transformed because of the legacy of nuclear testing (nuclear power has mutagenic potential) and some are unable to have children, or at least find it very difficult to have them. See Ibid, p. 380.

6 It should also be remembered that the US army still occupies Kwajalein Atoll, where it is testing missiles.

11 Notre traduction : « ‘Here’s a guy who could get super-excited about a napkin but wouldn’t care if there was an explosion outside’ » BECK Jerry, The SpongeBob SquarePants Experience: A Deep Live into the World of Bikini Bottom, San Rafael, CA : Insight Editions, 2013 cité dans ibid, p.360.